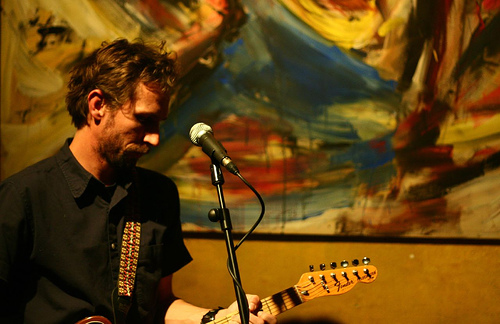 In the spirit of Woody Guthrie, four diverse songwriters — Jim James, Jay Farrar, Will Johnson and Anders Parker — banded together create New Multitudes, an album of all new songs using the unpublished lyrics they found in Woody Guthrie’s archives.

By now you’ve had time to check out our New Multitudes feature in the March/April issue. Here’s the raw interviews, which feature plenty of bonus material, for your enjoyment. Happy reading.

How familiar with Woody Guthrie’s music were you before taking on the project?

I knew a few things about Woody back when I was a kid, and maybe a handful of songs; but as time has gone my allegiance has intensified. I read the great Joe Klein biography about twelve years ago, and one of my former roommates from right around that same time is very well-versed on Woody. Both of those forces fueled my interest and research further.

What do you admire about Woody Guthrie as a person?

His fearlessness; the fact that he was consistently driven, dedicated, unpretentious and approachable. His take on life resonated with so many people, regardless of age, race, religion or vocation. His determination to challenge his audience, even until the end of his life, was astonishing. Looking over the lyrics and notes, it’s evident that even as his physical abilities were waning in those last years, his fortitude was not. The handwriting became shaky, but the pages showed me that the fire still burned strong.

What do you admire about Woody Guthrie as a songwriter?

His dedication to the writing, the breadth and detail of the subject matter, and the fact that the quality held up with the vast quantity. The believability of his narration carried a lot of weight, and there’s usually a great deal for the listener to un-box no matter what type of song he was singing. If it was a children’s song about a crayon or a graphic take on heroin or prostitution, he consistently painted the picture with great care and resonance.

Tell us about a few of your favorite tracks on the album.

My favorites shift around a lot. These days I’m gravitating toward Anders’ take on “Fly High”.
Any interesting origin stories about the creation of these songs?

“Muddy Water Finds Its Way” was a pretty fun one. Jim had an arrangement working and a demo in hand. When we tracked it we had the four of us standing around the mic, old school radio show-style with Jim and Jay playing the guitar parts. We cut it live, but not without a few tries. Jim and Jay had to angle the guitars on their legs like country showmen so as to get the right balance between the vocals and the guitars. That became known as “The Stance”. We had a pretty hard time getting a full take without erupting into laughter.

Did you use any napkin lyrics or anything similar?

The lyrics I received look to have been written in various notebooks. On some pages there are math equations and coffee cup stains in the margins. Woody was thorough about dating the pages and documenting his location at the time of writing.

Do you have any anecdotes of a song “choosing you”, or feeling Woody’s spirit?

Probably “Chorine.” Jay sent me a mailer with about 20 photocopied pages of Woody’s lyrics in it. I opened it at the mailbox around 4:30 that afternoon, and the “Chorine” lyrics were on the top of the stack. I read over them on the walk back to my apartment, and could already hear what I thought was supposed to happen with the chords, cadence of the vocal, and overall mood of the song. I walked upstairs and had the first demo recorded to the four-track by about 4:50. The demo sits pretty close to the version on the record. Not much changed. It felt automatic, so I guess I’d say that song chose me.

What was it like working together with three other collaborators?

The waters all flow in a pretty like-minded direction. There are often a lot of ideas flying around amongst the four us, but there’s good organization and communication to accompany that. After a lot of years of friendship and mutual fan-ship, it was educational to get a closer glimpse into their approaches. It was exciting thing to hear the songs take on their own life once everyone had contributed their parts and vocals. I’d look around the room at times and think “this is an incredibly good band.”

A little at first. I wanted to do right by the Guthrie name and legacy, but after coming to terms with that, I pretty well threw caution to the wind. I tried to go with gut instincts. I wanted to see if any songs just caught at first sight, or at least fell together in an unforced way. Sort of like we talked about earlier.. the songs choose you. I relied on the idea that I’d know the right songs when I could read the page and at the same time hear a melody floating around those lyrics. That’s what I was looking for.

If Woody were getting his start today, what do you think he’d be doing?

Working circles around most of us regular humans.

What are your thoughts on the Mermaid Avenue sessions? Were they an inspiration?

I respect those recordings a lot, and I eagerly awaited those releases. As far as inspiration for this record, I tried to shut things out and let the lyrics speak to me in as direct a way as possible. Woody’s words were the main source of inspiration.

Did anything surprise you when working on this project?

Given that the recordings come from numerous sessions, locations, and time periods, I’m happy with the way the whole record wound up fitting together. I guess that surprised me some. It came from a lot of different places but it still feels unified and flows in a natural way to my ear.

How does it feel to be a part of Woody Guthrie’s legacy?

Fortunate. A lifelong honor. This record has been coming together for a while, but I still have these moments where I’m taken aback by the fact that I’ve been lucky enough to record and sing Woody’s songs. I will always be grateful for that.

Can you imagine others finishing your own lyrics one day? 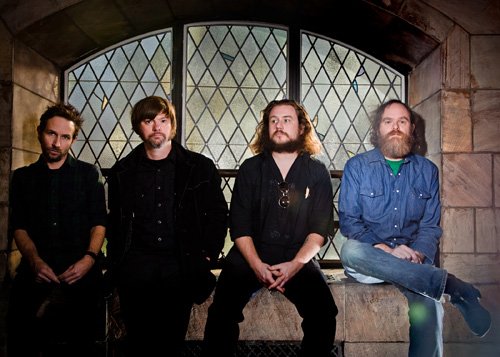 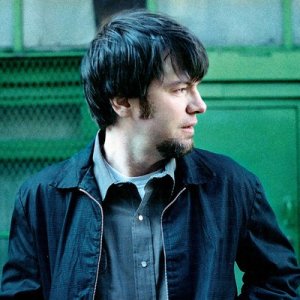 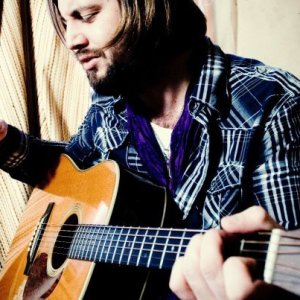