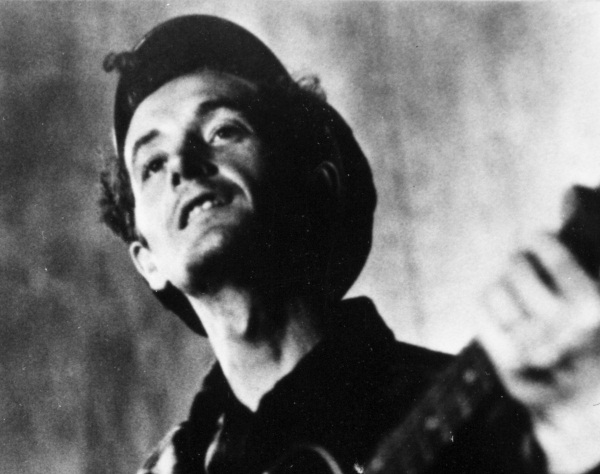 Back in 2006, Jay Farrar and Anders Parker were invited to sift through the Woody Guthrie archives to see if they could turn his unpublished writings into an album of songs; an honor previously bestowed on Wilco, Billy Bragg, and Jonatha Brooke.

They eventually brought in My Morning Jacket’s Jim James and Will Johnson of Texas alt-country outfit Centro-Matic to help them complete the project. The result is New Multitudes, a vibrant collection of tunes that blends the best of four worlds – five if you count Woodys’. We asked the creators of New Multitudes about their once-in-lifetime experience.

How familiar were you with Woody Guthrie’s music before taking on the project?

Anders: I have a vague memory of singing “This Land Is Your Land” in first grade, and was familiar with “Pastures Of Plenty” too, from an early age. I also knew the line “As through this world you travel, you’ll meet some funny men/ Some will rob you with a six-gun, and some with a fountain pen.” Again, not sure where or when the hell I picked that up, but it’s been rattling around in the old brain box forever.

So I was aware of Woody and had a vague idea of who he was but it wasn’t until I really got into Dylan (as most songwriters do, I suppose) and discovered what an influence he had been on Dylan that I really started to explore Woody and his music in depth.  From there I dove in.  Me thinking, “WTF, Bobby D stole his whole thing from this guy! Amazing! Awesome. Who is this Woody guy?”

Will: I knew a few things about Woody back when I was a kid, and maybe a handful of songs; but as time has gone my allegiance has intensified. I read the great Joe Klein biography about twelve years ago, and one of my former roommates from right around that same time is very well-versed on Woody. Both of those forces fueled my interest and research further.

Jay: Woody’s music was brought into focus for me through my parents, who sang his songs and had Woody Guthrie records. It was my father in particular that identified with Woody, as he spoke a similar dialect (south central Missouri) to Woody and had a part- time shared profession (Merchant Marine sailor). My father shipped out of New York City as a Merchant Marine in 1949, which was a couple of years after Woody Guthrie and a few years before Jack Kerouac. It was my mother that bought Woody’s records and taught me to play Woody’s songs as a kid.

Jim: I was somewhere in the middle. More than a casual fan but not an expert either.

Will: A little at first. I wanted to do right by the Guthrie name and legacy, but after coming to terms with that, I pretty well threw caution to the wind. I tried to go with gut instincts. I wanted to see if any songs just caught at first sight, or at least fell together in an unforced way. Sort of like we talked about earlier … the songs choose you. I relied on the idea that I’d know the right songs when I could read the page and at the same time hear a melody floating around those lyrics. That’s what I was looking for.

Were any of the lyrics you used scribbled on napkins or something similar?

Will: The lyrics I received look to have been written in various notebooks. On some pages there are math equations and coffee cup stains in the margins. Woody was thorough about dating the pages and documenting his location at the time of writing.

Anders: One of them was; “Around New York,” which was just scrawled on a scrap of paper.  This was it:

The tune wrote itself.  The most “Woody” of the melodies I wrote, for sure.

Jay: The lyrics for the song “Hoping Machine” jumped out at me from one of Woody’s journals. The contents of Woody’s journals could be routine like “8 am breakfast, 9 am haircut” juxtaposed with something deeply inspirational like, “Don’t let anything knock your props out from under you – always keep your mind clear and let your plans come out  of mistakes – Don’t let any earthly calamity knock your dreamer and your hoping machine.”