One of 2008’s most addictive albums (pardon the pun) was Tobacco’s Fucked Up Friends —  Tobacco being the name of the side project of Black Moth Super Rainbow frontman Tom Fec. Apparently, Beck was a fan of the album’s trippy, beat-heavy, experimental vibe as well. The Beckster collaborates on two songs from the followup, Maniac Meat. The titles? “Fresh Hex” and “Grape Aerosmith.” Aw yeah.

“I was writing some of these songs and I could hear Beck’s voice on them,” Fec tells Rolling Stone. “It was shaping the way they were coming out.” He also explains how the collaboration came to be: “Shaun, who runs the label, was like ‘Guess what? I’m taking a class with Beck’s music director and they actually know who you are!’

A campaign, lead by author Antonino D’Ambrosio, is looming to have Columbia Records reissue Johnny Cash’s 1964 album Bitter Tears: Ballads of the American Indian, from which Cash’s “The Ballad of Ira Hayes” originates. The album is a conceptual piece that examines the plight of the Native American Indian. “Nobody did concept albums back then,” says Cash’s son John Carter Cash. “And this album solidifies my father’s role as a humanitarian and a spokesman for the underdog. It’s such an important historical record, and I’d love to see it get a proper rerelease.”

She and Him will release their stellar sophomore album, Volume Two on March 23 via Merge Records. M. Ward and Zooey Deschanel can be heard performing the new tracks “Thieves” and their Skeeter Davis Cover, “Gonna Get Along Without You Now” on BBC Radio 6. You can pick up a vinyl copy of the album’s first single, “The Sun,” today, at your local record store.

Check out the band’s tour dates below: 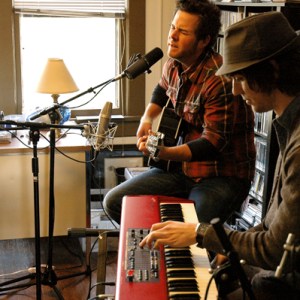