Here’s the problem with assuming new songs will sound new and music that feels generations old is, in fact, generations old: Diana Jones is a singer-songwriter who’s filled three albums—including this year’s High Atmosphere—with new, original material and the spirit of traditional mountain balladry. Sometimes she writes songs in her hundred-year-old East Nashville house. Sometimes she records snippets of song ideas on airplanes. Almost always the result is a stark, striking blend of the tangibly old and the subtly new.

You made some contemporary singer-songwriter albums in the ‘90s before arriving at the old-timey sound you’re best known for. What felt right about that change?

I found my way to it when I found my biological family, because I was adopted. But I think for me—and I’ve heard this from other people who’ve been adopted—you kind of feel rootless. I did. I grew up in suburbia and I remember feeling like there was just nothing authentic. I wanted something real and gritty, and where I lived it felt sort of washed in—I don’t know—white paint. [laughs] So when I found my way to my grandparents and my family and the mountain music that they loved, it took me a while. I loved it and I felt it and I knew that when I sang it, my voice made more sense, just physically. Because I have a voice that’s a lot like my grandfather’s, and he was a singer. It just has some of the same qualities about it.

Like when I was a kid and I tried to sing in choir, my voice had a natural break in it, almost like a yodel. And they kept trying to like smooth it out and they kept trying to train it out of me, and they never could. So once I started singing this stuff it was actually a good thing to have that break in my voice. So I kind of gave myself over to it. But having been adopted, I think it took me a while to feel like I deserved it in some way, or like I was entitled to it. Because I didn’t grow up with it. I was always attracted to it, didn’t know why, and then when I found my way to it, it took me a while to say, ‘Yeah, of course I have a right to sing this music.’ Whether I grew up in eastern Tennessee or not, I feel it.

With the contemporary singer-songwriter model, we think of personal connection primarily in terms of personal expression in songwriting. But that’s not necessarily the kind of personnel connection that’s most evident in your material.

I think even if I’m writing a character-driven story, it’s always going to be infused by my own personal emotional landscape as well. So the personal connection is deep and it runs in different directions. But it’s not the same. You’re right. It’s not the same as me writing about my experience in love, per se.

In the time that you’ve been doing this kind of songwriting, has there been an evolution from consciously working with traditional idioms to a point where you’ve internalized it?

A little bit. I think the way I write has changed. That’s because before I had the luxury of really going to a cabin in the woods and writing, and I don’t have time to do that anymore, which is actually a blessing. Because when you’re on the road it’s such a good thing, and you don’t want to complain if you have a lot of work. But for me, it did change the way I approached writing, because I had to do it on the fly, literally—like in planes without my guitar sometimes. I would think of something and I would write a song and I’d be humming it and I’d hum it into my cell phone, get home and try to work it out on the guitar. So I wasn’t sitting alone being quiet, listening to other music.

Do you think things have moved further in that direction with each album, because you’ve been touring more?

That’s fair to say. When I was writing the songs for High Atmosphere I came back to Nashville for a little bit and sat in my house. I have a shotgun shack that was built in 1900, and it’s got a lot of great atmosphere. I like to think about who lived there before, because the floors are that old, really thick pine. …So when I’m there I feel that vibe of the ancient, older connection to thing, especially things here in Tennessee.

If you actually listen to what’s going on in the songs, there are modern sensibilities, too; emotional sophistication and leaving room for ambiguity.

Yeah, I think you’re right. I think it is more of a modern thing. And it actually engages the listener, I guess, because it allows them to be part of it and have their own experience of it as well.

There’s foreshadowing in “Sister” and “I Told the Man”. You don’t know what’s going to happen to the characters. Do you feel an affinity with short story authors?

I love the form of a short story. I also love poetry. It’s got a faster arc. I love literature as well. I think it’s as important what you leave out as what you put into a story. I love it when I’m reading something and there’s room for me to imagine, there’s room for me to go farther, especially emotionally. And I’m also fascinated with where you start. A story, to me, is like this round thing. And then there are so many entry points.

With “I Told the Man” there was a woman on a CNN news feed. There were eleven miners caught down in a mine in Pennsylvania a few years back. They were there for three days and three nights. So all of their families…were around the mouth of the mine for three days and three nights. You know, CNN they show it over and over. We were all kind of fascinated and didn’t want to watch and watched anyway. There were these women’s faces and this one woman in particular, and I was just so taken with her. And I thought, ‘What would she say about this?’ I don’t presume to know what she would’ve said.

I offered my thoughts on how the traditional and the modern mix in your work. What’s your take on it?

Well, you said that very well, about how the holes are there. I don’t know that I would have thought of that myself, because I try not to think about it a lot. I’m kind of trying to stay innocent about my own process. I can see things in retrospect often. I try to just really listen to everything I love, learn the things that I love, the older songs that I love, actually learn them, because I think there’s something to be said for a good amount of muscle memory when you internalize something.

It’s almost like a song catches me under the rib cage and goes, ‘Okay, come on. If you sit down with a pen right now, you’re gonna write something.’ It’s not always great. A lot of times it’s just a start. I know a lot of writers in Nashville that I’ve talked to have really intellectualized their writing process, and it works for them. They know what they’re doing and they’re very into it. I don’t think that that would work for me.

It could be paralyzing to analyze it too much.

Well I’m thinking of singing—if you’ve practice the technique enough, you don’t have to think about the technique when you’re doing it, because it becomes part of what you do physically. Songwriting can be kind of the same thing. Hopefully I’ve internalized enough good stuff. And I think you do that just by really listening to other good writers. I listen a lot.

Have you had experiences where people have heard your songs and assumed they must be traditional?

Sometimes, yeah. A lot of times people will say ‘You know that song — did you write that?’ assuming that it was older. That happens at shows a lot.

Do you take it as a compliment?

Absolutely. I think that’s probably the highest compliment that somebody thinks that that comes from some song cache that preexisted me. 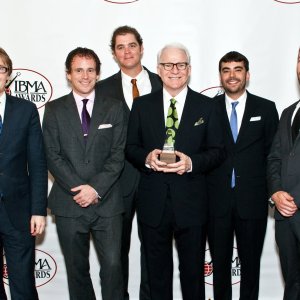