Salt-N-Pepa are the latest hip hop artists to receive their star on the Hollywood Walk of Fame.

Marking the 2,739th star on the Walk, the ceremony taking place on Nov. 4 will honor the New York City trio, who will receive their honor in the Recording category at 6213 Hollywood Blvd., adjacent to Amoeba Music. Fellow New York City rappers MC Lyte and Roxanne Shante will appear as guest speakers and help present the group with their star during the ceremony, which will be streamed live exclusively at walkoffame.com.

“This upcoming star ceremony honoring hip hop pioneers Salt-N-Pepa will honor the amazing ’80s music we all love and so many grew up with,” said Ana Martinez, Walk of Fame producer, in a statement. “We’re placing these ladies of hip hop royalty adjacent to Amoeba Music and right next to the Walk of Fame star of another queen of hip hop, Missy Elliott.”

Formed in 1985 with Salt (Cheryl James), Pepa (Sandra Denton), and DJ Spinderella (Deidra Roper), Salt-N-Pepa released their debut Hot, Cool & Vicious along with their first hit, “Push It,” in 1986 and continued to top the charts with the 1990 hit “Let’s Talk About Sex,” “Shoop” in 1993, and “Whatta Man,” featuring En Vogue, a year later. The group’s five albums also hit the Billboard 200, and in 1995, Salt-N-Pepa was the first female rap group to win a Grammy, picking up the award for Best Rap Performance by a Duo or Group for “None of Your Business,” off their fourth album, Very Necessary.

The group released their most recent album, Brand New, in 1997, and in 2019, Queen Latifah executive produced a miniseries on Salt-N-Pepa for the Lifetime network.

Prior to Salt-N-Pepa continuing on the Mixtape Tour in 2019 with Naughty by Nature, Debbie Gibson, Tiffany, and New Kids on the Block, the group parted ways with longtime member Roper (Spinderella).

Photo: Sophy Holland / Courtesy of the Hollywood Chamber of Commerce / Walk of Fame 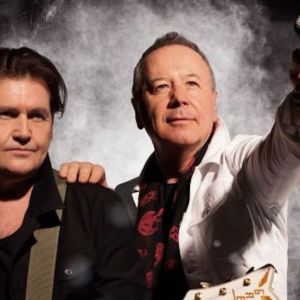