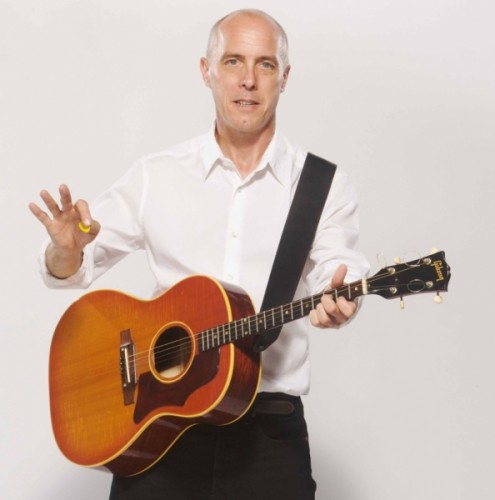 The first time I saw Freedy Johnston was at the Stone Pony in Asbury Park in 1991 or ’92. Memory doesn’t serve correctly. But I do remember that I was there to see Matthew Sweet who was touring in support of his phenomenal album Girlfriend and not the opening act, a short, skinny guy wearing a white t-shirt and jeans playing an acoustic guitar and singing a bunch of austere songs. I couldn’t pull myself away from the stage.

These days, I don’t get out to see live music too often. For one, I’m old and to further complicate things, I have fifteen-month old twins. You do the math. Asleep by ten. That sounds about right.

But one lazy evening this past summer, I peeled myself off the couch and headed down to the Rock Shop in Park Slope to see Freedy Johnston perform for about twenty people. Although the crowd was small, Freedy performed as if he was onstage at Madison Square Garden. He was personable, told engaging stories and played his ass of for more than two hours. All this for ten bucks!

Suffice it to say that I was tremendously pleased that Mr. Johnston sat down to talk to me about Ari, a guy who claims to have written some of Freedy’s songs, Neon Repairman (the album he’s currently working on) and of course songwriting.

First off, who’s this Ari character, and what songs has he claimed to have written for you?

Very funny, right? I guess I’m taking the risk of giving the lil’ fella undeserved publicity, but it is an hilarious thing to happen to a person. He is apparently very convincing in his wackadoodle story that I bought songs from him. Like a Jim Jones type I’m thinking. Anyway, it makes for good stage material during tuning.

Are there any songs that you wish Ari really had written?

No, I claim all my kids, even those that never left home.

What was the first piece of music you heard that made you want to write songs of your own?

I think when I heard Physical Graffiti, still my favorite record. After that it was probably My Aim is True.

Because my friend Christine offered to let me move into her 2nd Avenue apartment. I guess if I’d had a good friend in L.A. I might have gone there, who knows? I really did work at the Dyne-Quik in Kinsley, Kansas, right under a big sign with two arrows, one pointing to New York, 1561 mi., and one to San Francisco, 1561 mi.

What was the music scene like in NYC in ’86? Where did you play? How has the scene changed?

Well, I wish I could tell you, but I was there in my little room making 4-track demos. I didn’t play live much until I got a record deal in 1990 and moved to Hoboken. I then played a weekly open mic in a long-gone club called Live Tonight. Then graduated to Maxwell’s (which I just played last month) and on across the globe. In NYC, I played Tramps, The Bottom Line, The Mercury Lounge, CBGB. I’m sure the main difference is there are so many more bands. Which means so many more good bands. And of course the instant communication available now. But everybody still has to get in the van one leg at a time, as they say.

You’ve been writing songs for more than thirty years. What was the first song you wrote that you were proud of?

Memories are always suspect, but I suppose it was “The Mortician’s Daughter” on Can You Fly. For some reason I do remember finishing the last line in my Hoboken apartment. It seemed like magic when the last piece fit.

After “Bad Reputation” became a hit, did your approach to songwriting change at all?

I will never know, but I suppose it must have had an effect. I am not able to completely control these songs, to be honest. They come to me in groups, with their own ideas sometimes.

You took a long break between Right Between the Promises and Rain On The City. Why did you take the break? Did you write songs during that respite?

Don’t get married. And don’t get divorced. I did a CD of covers in that period, Favorite Waste of Time, and a CD of demos from the 80s called The Way I Were. But eight years between records is too long, I agree. And I plan to not repeat it. Neon Repairman will be released in early 2013.

You play quite a few cover songs in your shows. Last night you played “Wichita Lineman” and mentioned its influence on one of your new songs, “Neon Repairman.” What other covers have had an impact on your songwriting?

It’s been a way for me to play upbeat songs or love songs, because I don’t have too many. But I like playing them. So that’s basically why I do covers, because I don’t have a song like that in my gig bag. Honestly, it’s like the covers choose me. I just find myself one day unable to shake the song in my head, then before you know it it’s in the set.

How is the writing for Neon Repairman going? What can we expect?

I’m headed back out to L.A. this week to finish the record. We tracked 14 new songs. It all sounds super heavy and extra groovy.

I really dig the two tunes you previewed last night – “Summer Clothes” and “Neon Repairman.” There’s a line in “Neon Repairman” that goes “The darkness is my friend.” The characters in both songs are alienated figures that lurk in the darkness. Why do you think you’re drawn to the outcast?

I’ll just choose to turn away into the shadows rather than answer….

You’ve called yourself a storyteller. What stories do you like to tell?

It seems like putting any words to music makes an instantly magic story. But in general, I don’t really tell autobiographical stories.

Who is your favorite storyteller?

Have you ever heard Freedy Johnston in another songwriter?

Only when they complain onstage about their label or yell at the monitor guy, but otherwise not much. It’s a great honor to think that I might have inspired some kid like I was inspired. That often gets me through the day. I love music.

I love them both of course, but I am an absolutely unabashed Paul man. He has always been slighted slightly for some reason. But of course, the real power was how they worked together.

I read somewhere that you said My Aim is True is your favorite Elvis Costello record. Why do you prefer that particular record to something like This Year’s Model or Imperial Bedroom?

I love those too. It’s because that’s the one I had! My friends and my brother were getting into This Year’s Model, which is a better record actually, but I was still digging into the first one. Can’t say why. I also had Van Morrison’s Period of Transition, which is still one of the best records made.

What kind of impact has Tom Petty had on your songwriting?

Tom is one of our deities. He’s there with Neil and Bruce and Prince and the like. I get a lot of comparisons to James Taylor, which you gotta love. And Paul Simon is a singular songwriter.

How do you rate yourself as a songwriter?

I will only say that I’ve written enough unlistenable songs early on to have earned the right to be called “listenable.”

What Freedy Johnston song has had the biggest influence on you? Either musically or personally?

The song that had the greatest effect personally by far is “Bad Reputation.” Musically, it was “Rain on the City,” where I was able to write in code about being in New York in 2001.

Richard Fulco is the founder of RiffRaf.net 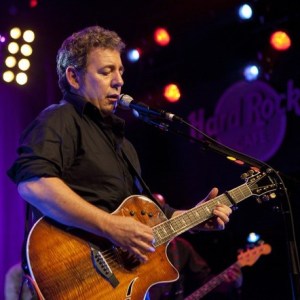