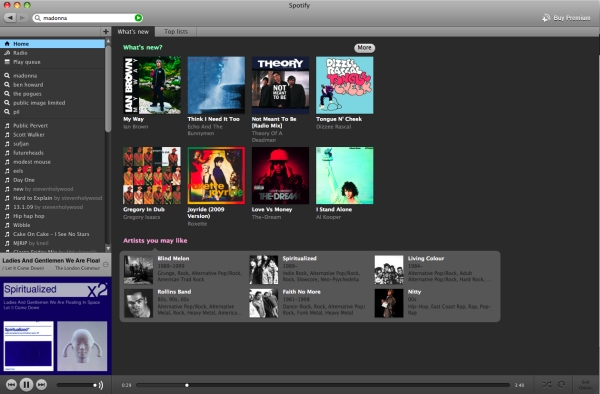 So what’s all the fuss about Spotify? Hang on… “What’s Spotify in the first place?” Well, I don’t mean to gloat but it makes a nice change to be the blow-in from Northern Ireland – or ‘Mickey Finn’ as I was so forcibly informed at a bar – and be up to speed with new technology in the very country that invented Netflix, Bacon Chapstick and the atomic bomb.

Beloved Wikipedia (don’t worry, it’s usually accurate and if not, just go right ahead and change the facts to suit yourself) defines Spotify as “a proprietary peer-to-peer music streaming service that allows instant listening to specific tracks or albums with almost no buffering delay.” Spotify also enables the user to create their own radio station by controlling the genres and eras of their favourite music, share playlists with friends, and pay to download and keep desired tracks via a partnership with 7digital.

Spotify launched in October 2008 to minimal fanfare in its native Sweden, a country synonymous with music piracy thanks largely to ThePirateBay.com, a BitTorrent tracker that locates millions of illegal film and music files. That particular digital galleon was dealt a fatal blow in April 2009 however, when the four men behind the site were jailed for 12 months and ordered to pay $3.54 million in damages to the music and film industries.

Given that approximately 95 percent of music downloads on the Internet are currently illegal according to statistics from the International Federation of the Phonographic Industry (IFPI), coupled with the year on year decline of CD sales, solutions need to be found.

Nine Inch Nails debuted 2005’s With Teeth on their MySpace page prior to its in-store release as a way to keep fans from downloading illegally, while various tracks from Year Zero were leaked online by the band in 2007, the same year Radiohead released the critically acclaimed In Rainbows as a “name your price” download. This may be a sustainable marketing tool for established artists, but a more universal approach is going to be required in an ever-changing industry.

Spotify is a completely legal program with over 6 million registered users in the UK, France, Spain, Finland, Norway and Sweden. Andres Sehr, press spokesman for Spotify, had little to divulge on the long awaited American release however, though it’s generally accepted to be only a matter of time. “We haven’t yet confirmed a date or subscription charge and we are still in negotiations with the labels. As soon as we do have more information about a US launch we’ll be sure to alert the media.”

One major stumbling block to a US launch may be that the vast majority of current users are happy with the free version of Spotify, complete with commercial interruptions. The uptake of the premium service, priced at £9.99 per month in the UK (roughly $16) has been minimal, as proved by a reluctance to reveal official subscription numbers. This will either result in more adverts, or possibly the end of Spotify as we know it, although Daniel Ek, co-founder, entrepreneur and at the tender age of 26, the public face of Spotify, was keen to point out on his blog that, “advertising revenues have now passed the millions of Euros per month mark.”

As a user of the free service for the best part of a year, I’ve found the commercials to be of negligible impact to the listening experience, especially when, unlike public radio or even Pandora, you can be certain the next song is one you want to hear. Spotify has essentially handpicked the most user friendly aspects from a wide range of music sites and created an easily navigated, minimal fuss music player. Success has in turn been driven by word of mouth from eager fans, instead of a huge marketing campaign.

A golden ticket to increased subscriptions could be the Spotify iphone App, which received the green light from Apple in August 2009. This will enable premium users to access the service, taking their music on the move without commercial interruption, while storing 3300 tracks for offline use should a Wi-Fi connection be unavailable. Pandora reigned as the most downloaded app of 2008 and the Spotify app became the leading download in its first week of release (September 9, 2009), giving a strong indication of future success.

With all the momentum behind Spotify, you’d be forgiven for thinking there wasn’t even a whiff of competition in the streaming market. Digital music site Hypebot.com recently revealed however that the largely unheralded we7.com has spent the past week as the most popular music site in the UK based on page views. A slew of competitors to Spotify’s crown are sure to emerge in the coming months but history teaches a harsh lesson, as a veritable graveyard of heavy hitters have made attempts at cracking the lucrative online music market and fallen by the wayside.

AOL MusicNow, Musicmatch Jukebox, Yahoo! Music Unlimited and MTV URGE are just a few to have tried and failed, a point which Daniel Ek, is all too well aware of:

“It’s been an interesting year within the music industry, with many insiders questioning whether Spotify’s model is a sustainable one,” Ek stated on his most recent Spotify blog.

“The truth is that even the most successful digital business to date, iTunes missed its revenue targets in its first year by 30%, and label executives were far from convinced that this was the future. And we of course know how that story turned out with iTunes and the hardware being the defacto digital music business of today.”

Major labels have been quick to sign up with Spotify  – and it’s a poorly kept secret that most of the big five (Universal, Sony, EMI, BMG and Warner Brothers) have an invested interest in its future success, with royalties being paid for every stream of their artists.

Daniel Ek’s final statement on his most recent blog provides a valuable insight into his ethos for Spotify, offering a degree of reassurance for the music industry that this is about creating more than just an undeniably lucrative business,

“Overnight success takes a long time. To quote Daft Punk – work it harder, make it better, do it faster, makes us stronger, more than ever, hour after hour, our work is never over.” 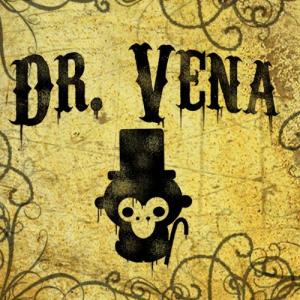