Mating Ritual’s Ryan and Taylor Lawhon don’t actually have an issue with West LA, but that didn’t stop them from writing an album about a certain type of East LA hipster that does.

“When we first moved to LA we lived in the Valley, and we like the Valley. The Valley is totally cool,” Ryan tells American Songwriter in an interview featured below. “Then we migrated down through Los Feliz to Downtown and finally made it farther East. We don’t really [have any beef with the Westside], but everyone on the Eastside kind of feels that way, and everyone on the Westside kind of feels the opposite, and [this album] is poking fun at that idea.”

The album in question is The Bungalow, Mating Ritual’s silly, sweeping fourth full-length in as many years. Though The Bungalow is the name of a totally overrated Santa Monica bar, the title refers to a fictitious Eastside party house inspired by Ryan’s own pad in Highland Park.

“We wanted this one to be almost entirely light-hearted,” says Ryan of the album, which comes after 2017’s How You Gonna Stop It?, 2018’s Light Myself On Fire, and 2019’s Hot Content. “We saw the world going down a dark place and we wanted to make a mental vacation from that with this album.”

We recently chatted with the brothers about The Bungalow, their reggae and disco influences, and their plans to hold a mini record release party in Palm Springs (after taking COVID-19 tests, of course). Check out the full interview—plus a new performance video of the album’s groovy title track—below.

American Songwriter: Ryan, a few years ago you said, “I believe that the setting in which you are writing/recording has an immense impact on the music you make, and more than just sonically. Of course certain rooms/hallways will give you different recording sounds, but location/surrounding affects my mood and that eventually becomes the song itself.” When and where did you write and record the songs on The Bungalow? What place or places shaped this album?

Ryan Lawhon: The Bungalow was all written at my house, and the album is actually about a fictionalized version of my house. We quite literally wrote it about the experiences we’ve had here. We made some up and threw those in there as well. It was a brand new house, and it was the first time I had a detached studio behind the actual property so I got to “go to work” every day and go out back and fully immerse myself in creation. It led to these light-hearted, silly songs about the neighborhood and about the experiences and the fun that we were having at the time.

What neighborhood is that?

When I first saw the press release for this and I didn’t know the title referred to your house, I thought, ‘Wow, they wrote a whole album about that bar called The Bungalow?’

Ryan: I’ve never actually been to The Bungalow, but I have read a lot of TMZ articles about Bachelor and Bachelorette cast members there. We actually had planned on bootlegging a video at The Bungalow and trying to do it as quickly as we could without getting caught, but obviously COVID shut down that idea.

This is your fourth record out in as many years. How does this one compare to your last three, both musically or thematically?

Taylor Lawhon: I’d say this is probably our most light-hearted record, both in the feeling of the music and lyrically. It was written pre-COVID, all in 2019, so we just wanted to make our most fun, East LA party record.

Ryan: We wanted this one to be almost entirely light-hearted. We saw the world going down a dark place and we wanted to make a mental vacation from that with this album. We obviously had no idea what was going to happen, ‘cause now it’s much, much different. And we really wrestled with the idea of releasing it during COVID, ‘cause it feels so polar opposite to what’s going on right now.

Ryan: That’s the reason why we decide to go through with it and still release it. A bunch of our friends were like, “No, you have to [release it]! We need this.”

It definitely has an escapist vibe. In the past you’ve described your sound as “Two dudes who think they’re living in the 80’s.” What are some recent influences—either 80’s or otherwise?

Ryan: I think we went back a couple years on this one to Studio 54 vibes. We tried to hit a lot more of the Skatt Brothers and a lot of the power disco stuff that was going on like Lime. Still early-80’s, late-70’s dance stuff, but we tried to incorporate a lot more live instruments and samples on this record. We never really sampled anything before. We played around with samples pretty heavily on this, but they were all string and sax samples and a lot of woodwinds.

Taylor: I’d say our previous two albums, Light Myself On Fire and Hot Content, were definitely more on the British new wave 80’s train. I’ve been listening to a lot of 80’s reggae and some Brazilian disco. So this one’s taken a trip down south.

The title track captures some of that energy, and there are some hilarious lyrics in there as well: “Life is a prison if you live West of the 101 /  I like my streets skinny / with a mango cart on every one.”

Have either of you ever lived elsewhere in Los Angeles? Where does the Westside / Eastside beef on this album come from?

Ryan: When we first moved to LA we lived in the Valley, and we like the Valley. The Valley is totally cool. Then we migrated down through Los Feliz to Downtown and finally made it farther East. We don’t really [have any beef with the Westside], but everyone on the Eastside kind of feels that way, and everyone on the Westside kind of feels the opposite, and [this album] is poking fun at that idea.

We definitely have some friends who are very extreme on their opinions. A lot of people are like, “If you’re East of La Cienega [Boulevard], you’re not in LA,” and we thought it would be even funnier to say “If you’re West of the 101,” which is, like, most of LA. So we just wanted to stir the pot a little bit.

The Bungalow has a few ambient spoken interludes, including the intro and outro. Who’s speaking on those? And how do those interludes structure the record?

Ryan: They started out as an exercise in sampling for me, ‘cause I just was not feeling creative one day and wanted to see what I could do with spliced samples. So I took a bunch of bossa nova stuff and started chopping away and adding my own elements. They weren’t songs—they were never supposed to be. They were just supposed to be little vignettes. Then we ended up doing some spoken word stuff. We actually did write the songs—they’re not ad libbed. We wrote the lyrics in advance. We pitched them down hip hop style.

Taylor: All of those lyrics on the spoken word interlude tracks became the character who lives in the bungalow. He’s kind of an art douche. That’s him. He’s Eastsider bungalow man!

Ryan: We came up with the term “dove” for that type of person, because we thought “hipster” is outdated. We wanted [to capture] the 2019 version of that: somebody who looks down on the word “hipster” but still very, very much is all of those ideals. That’s directly referenced in our song “King of the Doves.”

Because touring is off the table right now, how will you celebrate your record release?

Ryan: That’s actually going to be really fun. Every time we do an album we always go out to Palm Springs and we have an extravagant Airbnb weekend where we party with a bunch of friends. The album was supposed to come out in May and we pushed it back to August thinking that COVID would mostly be under control by now, primarily so we could go out to Palm Springs to party with all our friends. We’re still doing it though! We’re all quarantining right now, then we’re all getting tested next weeking and hoping everything goes well so we can have an extravagant, drunken party in the desert.

Taylor: It’ll be a mini album release party in the desert!

The Bungalow is out August 21 via Smooth Jaws. You can pre-order it on vinyl here. 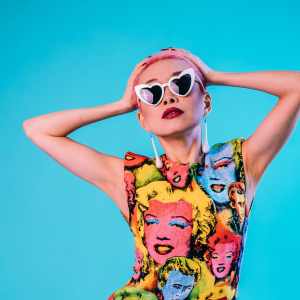 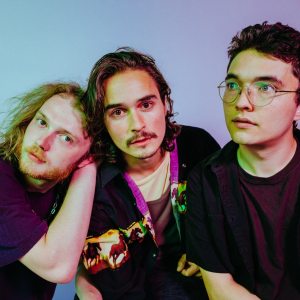