The great man sat on the side of the bed, listening to bird songs out the morning window, balancing a tennis shoe on top of his head, trying to find some humility.

Cash did, of course, have some humility. It takes humility to admit the lack of it. But, at his core, Cash knew that both he and his rhyme-spinning, philosophizing, renegade friend Tom T. Hall were great men. They were exceptional, which Hall figured might be problematic.

“I have this theory that songwriters are not good songwriters,” Hall says today, at age 79, sitting in the kitchen nook at Fox Hollow, the Tennessee estate he shared for decades with his wife, Dixie.

Miss Dixie, as everyone called her, had more bluegrass songs recorded than anyone in history. She died in the first month of 2015. Tom T. sometimes thinks of Emily Dickinson’s words: “Parting is all we know of heaven, and all we need of hell.”

But back to the theory, and to the tennis shoe that rested daily on Tom T.’s cranium.

“Songwriters aren’t good songwriters,” he says. “People are good songwriters. So all of my career I fought against sitting down as a ‘Songwriter.’ I would sit with that sneaker on my head, until I found humility and became a person.

“You sit down as a person and write a song. If you’ve written a song by the time you stand back up, you’re a songwriter. But the person comes first. You can’t look at the thing from somewhere up above, or from some place of supposed knowledge. Anyway, if you look at the state of the world, mankind has a lot to be humble about.”

Tom T. Hall came to Nashville on the first day of 1964, steering a pink Cadillac that he bought after someone told him that he’d never be able to buy a Cadillac by writing a song. He came to town because a publisher had promised him $50 a week if he’d make up songs that Dave Dudley, Jimmy Newman, and other country stars of the day could sing.

When a songwriter signed a publishing deal — and this holds true today — his job was to write songs that would please the publisher. And publishers are pleased by songs that get played on the radio. It’s “Figure out what’s working, and then do that.” Makes perfect sense, though the end of that road is most often frustration and burnout for the creators, and for listeners who don’t want to spend their day hearing 20 slightly different replications of the same tired and silly thing.

Tom T. was okay at writing Little Darlin’ songs. He was fast, and smart, and he took his job seriously. He wrote every day, typing words onto paper, and then singing them into a Wollensak recorder.

His friend Kris Kristofferson — they met when a fresh-to-Nashville Kristofferson brought him a beer and told him he liked his songs, to which Tom T. said, “Pleased to meet you, it’s a hairy-legged town” — accused him once of “impersonating a hack.” That was said without malice. Kristofferson just meant to say that Hall approached songwriting as an office job, not as a fanciful and mysterious lifestyle choice.

Hall wrote Little Darlin’ songs by making them up, the same way grown men sit in Nashville offices today, collaborating on songs about fictional farm parties. He made up songs with titles like “From Sad Street To Lonely Road,” “National Everybody Hate Me Week,” “Floptop Beer,” and “Love Insurance.” He sat down, as a songwriter, and wrote those songs.

But then, in 1968, a wonderful thing happened: Failure.

Grand Ole Opry star Stonewall Jackson was a neighbor, and one day Jackson told Hall that he was looking for songs for a prison album. At the time, Johnny Cash’s Live At Folsom Prison was riding high, and Jackson was seeking a thematic piggyback. He asked Hall to write him some prison songs, and Hall went home and struggled mightily. He told Miss Dixie he felt phony writing about prison, since he’d never been in prison. “Make something up” wasn’t working.

Hall spent a week in a Paintsville, Kentucky jailhouse, before his Cadillac-acquisition days. He wasn’t supposed to spend a whole week there. He’d been pulled over for a minor offense, and was set to see the judge the morning after the arrest. But the judge’s grandmother died, and it took His Honor seven days of grieving and resting before he could fine and free the restless prisoner.

That’s when Tom T. Hall wrote his first Tom T. Hall song. It was called “A Week In A Country Jail.” It begins, “One time I spent a week inside a little country jail, and I don’t guess I’ll ever live it down/ I was sitting at a red light when these two men came and got me, and said that I was speeding through their town.”

It was the first song Hall never made up. He didn’t have to.

A year later, “A Week In A Country Jail” became Tom T. Hall’s first #1 country hit. He’d gotten the record deal because his publishers didn’t think they could pitch these new songs he’d been writing, the ones about his own hard truths. They weren’t Little Darlin’ songs, they were Tom T. Hall songs. They were at once deceptively simple and remarkably evolved, informed by life and by literature.

“I learned to write by reading,” he says. “I love the simplicity of Hemingway, and I think I got my social conscience from Sinclair Lewis. Hemingway said he used the word ‘town’ instead of ‘metropolis,’ and got paid the same ten cents for both words. That stuck with me.” 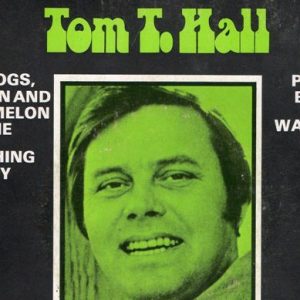 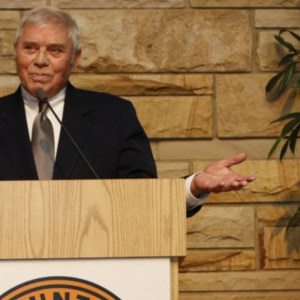