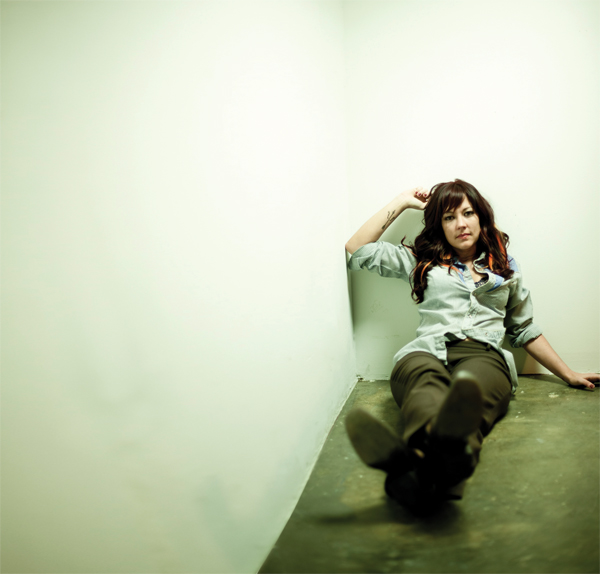 Amanda Shires finally bought a Kindle. It’s not her first choice for reading, but it’s a must for touring. “I usually have about twelve books going at one time,” says the Texas-born, Tennessee-based singer-songwriter, “and I had to have separate luggage just for books. I got tired of hauling that shit around.”

Shires is a voracious reader, devouring pulp and literary fiction as well as poetry, nonfiction, even how-to guides – anything that is bound between two physical or digital covers. Shires counts fellow Texans like Billy Joe Shaver (whom she’s worked with) and Rhett Miller (whom she’s opened for) as heroes, but she finds just as much, if not more, inspiration in the works of poet Mark Strand and novelists Paul Auster and Salman Rushdie, whose Haroun & The Sea Of Stories is a favorite of hers.

Over two solo albums (three, if you count her instrumental debut, Being Brave, but more on that later), she has plumbed the ironies and devastations of love, lust, and loss in gently melodic Americana that’s defined by her swelling melodies and gently grained vocals. Carrying Lightning builds on the evocative alt-country of 2009’s excellent West Cross Timbers, showcasing both the breathless immediacy of her singing voice and the plainspoken elegance of her songwriting voice. Full of Tom T. Hall’s wry humor and Leonard Cohen’s dark intimations, these are songs full of dark undercurrents and uncertain desires: “Let’s have a night that won’t go away,” she sings on slow burner “Shake The Walls.” “Just keep the shirts and your hands and the jeans moving … a downward trend.” The verses in The New Yorker are rarely so pointedly and excitingly ambiguous.

For such a self-possessed lyricist, it’s remarkable that Shires started off not as a songwriter, but as an instrumentalist. Growing up in Mineral Wells, a distant suburb of Dallas, Shires studied violin as a child, although she soon grew bored within the strictures of classical music. “You don’t really learn improvisation,” she explains. “Everything’s written out, even the tempos and expressions.” She soon became obsessed with Western swing and the freedoms of that rambunctious form, which taught her to play well with others: “I learned how to fill, how to play around, how to communicate onstage as a sideperson, how to improvise.”

On Carrying Lightning, Shires the scribbler jostles for elbow room with Shires the fiddler. The latter’s solos on the melancholy jazz number “Love Be A Bird” and “When You Need A Train It Never Comes” (a nice twist on the train-song format) provide musical commentary to the former’s lyrics, as though they both know there are some things that can’t be expressed in words. And yet, she tries.

Shires’ compulsive reading feeds directly into her persistent and studious writing, and she makes time every day to compose a few stray paragraphs or some song verses – whether she’s out on tour or decompressing at her home in Nashville. She recently enrolled in a Master’s program in creative writing at the University of the South, in Sewanee, Tennessee, which will take her off the road and out of the studio for eight weeks a year. When she does tour, Shires packs writing assignments the way she once packed novels. She finds writing prompts online and saves them for inspiration later: “I write them in my journal and space them out, so when I get to that page, I’m like, oh cool, a writing prompt! It’ll be something like, Imagine a conversation between Harry Houdini and Roberta Flack. What would they say to each other?”

Sometimes her self-assigned exercises become songs, but more often they don’t. And while putting her deeply personal songs out there for the world to hear can be nerve-wracking, it’s absolutely necessary, from a creative as well as a commercial standpoint. “People like to say their songs are like children,” she says, “but you gotta get those kids out there so they can make some money and pay the rent.”

Even as Shires is finding new fans through the release of and tour behind Carrying Lightning, she remains guarded about what her songs mean and who they’re about. She knows listeners form their own personal attachments to songs, the way she does with books, and that interpretive experience is, to her, sacrosanct. “I write songs the way it is, and it means what it means to me, but I don’t know what it means to other people. That’s so cool. I love that you can listen to a song and it can belong to you.”