Since launching his solo career in 2002, Jesse Malin has established himself as an insightful and empathetic singer-songwriter whose lyrics eloquently capture the nuances in interpersonal relationships. Throughout the years, though, he’s also tackled broader and more politically pointed themes – which is what he’s done with his latest single, “Ameri’ka” (a digital-only release out on October 28 via Wicked Cool Records).

“I feel like musicians get a lot of heat for writing songs that are political, but I feel that life is political,” Malin says, calling from his apartment in New York City’s East Village neighborhood. “Sometimes you just have to say what you feel and stand by it. Not everyone’s going to agree, but you have to be who you are.”

Malin says that the current political and social turmoil in America, coupled with the COVID-19 lockdown earlier this year, inspired him to write this song. Malin had been in the middle of an extensive European tour when he was forced to fly home just as New York was going into quarantine. “I was sitting in my house, locked in and scared, and I really felt that our president wasn’t stepping up as a leader with COVID – he seemed to be mocking it while some of my friends were dying,” he says. “I’m feeling that this guy has stoked the fires in this climate of negativity as I was watching people loot and riot and protest right outside my door.

“I’m proud to be an American,” Malin continues. “I love it here because it’s about progression and freedom and acceptance. But also, we come out of genocide and taking the land from Native Americans and bringing slavery here.” “Ameri’ka” reflects this complexity, with gentle, wistful instrumentation that allows the sharply critical lyrics to stand out.

Malin wrote most of the chords and the melody and sketched out a few of the lyrical ideas before he decided to bring in his longtime co-writing partner, Holly Ramos, to help him finish the song. He and Ramos first met when they were teenagers growing up in New York City: he in outer Queens, she in the northernmost part of Manhattan – though both of them were drawn to the downtown hardcore scene.

Ramos helped Malin write some songs for his first band, Heart Attack, who were heavily into political activism. After starting off their songwriting collaboration in this way, it seemed only natural to carry on that tradition now with “Ameri’ka.” “I thought this would be something we could tackle together because it brought back some of the feelings of the Reagan Era and AIDS and people not caring and ignorance,” Malin says.

“Ameri’ka” will appear on Malin’s next album, which is set for a mid-2021 release. He didn’t want to wait that long to release this song, though. “I felt that now was the time – I wanted to get it out before the election,” he says. To that end, “Ameri’ka” will be released a week after Malin and his band recorded it. “We went in the studio pretty fast to get it out,” he says. Malin co-produced the track with Derek Cruz, who’s also the guitarist in his band.

Malin and his band first publicly performed “Ameri’ka” on the October 22 episode of The Fine Art of Self-Distancing, his livestream show. Almost every week since the pandemic resulted in restrictions last spring, Malin has broadcast this show – first doing them solo on an acoustic guitar from his living room, then shifting it to the stage of the venue Bowery Electric (one of several New York clubs that Malin co-owns) where he and his band perform (at a distance from each other and the crew). Guest musicians appear, both as performers and in interviews that Malin conducts.

“It’s like a variety show rock concert, and people have been very supportive – I’m beyond grateful for that,” Malin says of the livestreamed shows. “We try to dig deep and do cover shows and play [my] albums in full. We’ll see how long we can keep this going until we can get back out there and feel safe getting next to people again – which I miss incredibly.”

Although the pandemic has resulted in a serious setback for Malin (as it has for every working musician), figuring out how to adapt and survive is something that he’s already demonstrated he can do. He has reinvented himself more than once: first, after his hardcore days, he became the lead singer for the celebrated glam-punk band D Generation from 1991 to 1999. After that, he transformed himself again, this time becoming a respected singer-songwriter.

Looking back, Malin sees how his writing influenced his career choices. “With D Generation, we didn’t just sing about cars and girls,” he says. “We were singing about things we wanted to question and put a spotlight on, like with songs like “No Way Out.” But that band wasn’t heard lyrically – [audiences] just looked at us more for our image and our sound. So I felt the need to really strip it down and be heard and have the lyrics take center stage, so I started playing acoustic and went solo.”

So far, Malin has released eight critically acclaimed solo albums. In this phase of his career, he has worked with other highly regarded songwriters: Ryan Adams produced his 2002 debut album, The Fine Art of Self Destruction, while his most recent release, Sunset Kids (2019) was produced by Lucinda Williams and Tom Overby. He dueted with Bruce Springsteen on “Broken Radio” in 2007. By now, there seems little doubt that Malin has finally made his words truly heard.

When writing, Malin has certain ways to make sure what he’s creating is authentic: “Think, ‘Will somebody be able to relate to this?’” To further test it, he says, “Read it back to somebody. Sing it over a microphone. See if you can stand there and look somebody in the eyes and sing it.” But, Malin warns, don’t be too self-critical, either. “I think you just have to really write what you feel and not always worry about it being perfect. Sometimes the imperfections are part of the beauty.”

Ultimately, though, Malin just tries to stay true to himself. “First you have to play for yourself, and you hope that other people will appreciate it and show up and support you,” he says. “These days, without touring and without much merch sales, you have to really question, ‘Why do you do this?’” For Malin, the answer is, “Because I need to. I love what I do.”

Ticket link for the October 29 The Fine Art of Self-Distancing livestream show. He also has a t-shirt that will benefit the NYC foodbank. 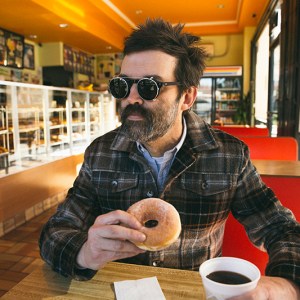 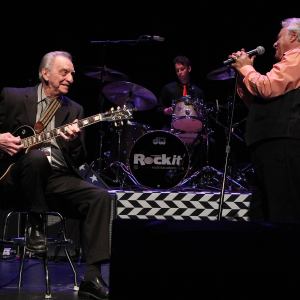