As 2020 unraveled, Charlie Nieland began going backward in time, into musical inspirations—everyone for Blur and U2, The Beatles and Cocteau Twins—and recording at his apartment in Brooklyn, New York.

“As the pandemic sort of took hold, I was listening to a lot of music and thinking of how I wanted to touch base with all these different touchstones in my life musically,” says Nieland. “This album is an assemblage of all these different influences that are super eclectic, and I wasn’t afraid to reach in different directions, or remain in one style.”

Connecting with the other half his literature-fused duo Lusterlit Susan Hwang on backing vocals, along with cellist Patricia Santos and drummer Brian Geltner, Nieland began working on his second solo album Divisions.

Divisions is sonic prose. A collection of short stories eloquently derived from poignant lyrics based on the notion from a book, a piece of Nieland’s musical past, and his shifting mindsets. Each chapter flourishing around lush instrumentation—everything from six- and 12-string acoustic and electric guitars, lap steel, fretless and fretted basses, virtual mellotrons, TR-80s, analog synths—meld into an abstract realm for Nieland, who has written and produced for artists like Rufus Wainwright, Debbie Harry, and Blondie, and Scissor Sisters, in between scoring television and film, including the 2001 movie The Safety of Objects, starring Glenn Close.

As a vocalist for Her Vanished Grace (former drummer Billy Loose also contributed on Divisions) for more than 20 years before closing that chapter, following the band’s 2012 album Star-Crossed, Nieland began exploring more solo material in 2013, upon joining the Bushwick Book Club, a local performance series for songwriters and other artists who will read a different book each month then present it in song with a live performance.

Working on new music, following the release of his debut Hopeful Monsters, as more apprehension and dread set in surrounding the pandemic, injustices, and the election of 2020, Nieland realized that the songs on Divisions were his reaction to everything going on around him.

By 2019, Nieland wrote the title track, which stuck in his head for some time and became a “mascot” for the remainder of the tracks.

“It just had a certain magnetism and sort of a power and when I wrote it,” he says. “It had that feeling of euphoria when you feel like an idea sort of came through you, so that was basically the main thread for the rest of the album.”

After reading “The Hidden Life of Trees” by Peter Wallen, a book unraveling the interconnected root system among trees, which allows them to share nutrients and energy in a very non-competitive nature, Nieland has his main impetus for Divisions. Read during the run-up to the 2020 election, the book spoke to social divisions and how connectedness is the more beneficial option for all.

“All the lines were being drawn, and the language that we as humans are using to create enemies of people that we disagree with,” says Nieland, “but the profound nature is that we actually become more dependent on each other as we create enemies of each other. It was such a great metaphor for what’s going on right now.”

Nieland adds, “It tied into ‘Divisions’ well. The song is not based on the book, but it’s an example of how I would let the book spur a thought process or emotion, and plug it into something I was feeling right then, and allow myself to bounce off the book.”

Self-produced by Nieland with portions recorded at Saturation Point Studios in Brooklyn, Divisions is a book of different short stories retold with a new perspective. “The Land Of Accidents,” inspired by the Zadie Smith novel “White Teeth,” addresses detachment and the search for a freer state and acceptance. “Meta Incognito” was derived from tapping back into ’70s progressive rock and Peter Gabriel-era Genesis, while reading the book “Wayfinding” by M.R. O’Connor. The book explores cognition and how humans develop a sense of place in the world and identify how we can find our way back with mapping something in our brain to a place, and how that’s all connected to the development of language and of storytelling, which goes into the study of Inuit culture.

O’Connor’s story helped Nieland create the cinematic backdrop needed to describe the Inuit’s song and how an ability to tell stories creates a life.

“Our life becomes this thing,” says Nieland. “This past that we think of as a series of events, actually becomes what you look back on, and that’s the shape of your life.”

For Nieland, his 2016 debut Hopeful Monsters and Divisions were the first albums he made since the end of Her Vanished Grace and coincided with Nieland’s involvement with the book club in Brooklyn, writing his first song with collective in 2013, based on the 1974 civil war novel “Killer Angels.” After becoming co-producer and band member with club founder Susan Hwang in 2016, many of the songs written during this time helped form Hopeful Monsters with songs written later piecing together Divisions.

“My songwriting has gotten a little more divergent, and explores different emotions with a little more clarity,” says Nieland. “Songwriting is like a news report. When it works well for me, I catch on to what I’m feeling in the moment, or some ongoing concerns I want to try to address. If I can infuse a spontaneous feeling of that day, and that feeling of right now, that usually gives the song a certain energy that gets it out of the unconscious and into the world.”

Still, Nieland’s music isn’t solely linked to the subject matter within the books he’s reading. “My approach to writing for the book club isn’t to write something that you necessarily need to read the book to appreciate,” says Nieland. “I like to use the book as a foil to stimulate what I’m feeling right now. What’s great about the book club is that I do it every month, so it got me in touch with having a deadline around my songwriting.”

He adds, “The books give me a sort of license to explore some other imagery, or explore a different thought thread and see where that takes me in terms of where I have a song. It’s an extra dimension where I can bounce off of another piece of art.” 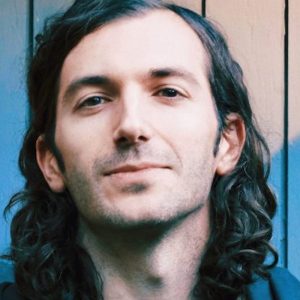