When David Olney died onstage exactly one year ago today, it sent a seismic ripple across the songwriting community, not just because of the nature of his death, but because of his lasting impact and legacy. He wasn’t just a revered songwriter. He was a revered storyteller whose tales resonated so strongly that other songwriters like Linda Ronstadt, Emmylou Harris and Laurie Lewis often bypassed their own compositions to cover his.

“One of the best songwriters working in the world today” he was called by Steve Earle. The Waterboys’ Mike Scott quipped, “Only wisdom and deep experience can make music like this.”

When Olney took the stage at 30A Songwriter Festival in Santa Rosa Beach, Florida on January 18, 2020, the reverent audience hushed to witness a master at work. Little did they know that partway through his third song when he stopped, apologized and closed his eyes, he’d never return from the pause he took and that, in fact, would not only be the end of his set, but his final bow. Olney quietly slipped away and never finished his song.

In fitting tribute exactly one year to that day, American Songwriter is premiering his final song, “My Favorite Goodbye,” whose production was completed on that very same day of his death.

A collaboration with Anana Kaye and her husband and musical partner Irakli Gabriel, “My Favorite Goodbye” is a lilting ballad featuring upright bass, piano, acoustic guitars, a stripped down drum kit and a mournful cello. This lush, acoustic instrumentation lays out a gorgeous musical bed that perfectly highlights Olney’s and Kaye’s vocals front and center. The album from which this track is taken, Whispers And Sighs, is the final studio album by Olney, and in collaboration with Kaye, he passes the torch to his younger duet partner, continuing the musical lineage he started decades before through the album’s 13 tracks. This poignant single remains as a fitting memento he leaves as a keepsake.

“’My Favorite Goodbye’ was the first song we recorded and the last one we finished mixing—on the evening that David passed,” remembers Gabriel, noting the sad irony of the timing. “It was playing on loudspeakers when I picked up my phone to call him and tell him it was finalized, but instead I found messages informing us about what had happened at 30A in Florida.”

Profoundly tragic but also rather appropriate, Olney passed away while doing what he loved most—performing. The fact that his coda—this track “My Favorite Goodbye”—is about closure and reflecting on a relationship’s end carries a wallop whose emotional bruise lingers and never fades away.

Looking back through sepia-toned nostalgia, Olney sings in a duet with Kaye, “I ran out of excuses on the twenty third of March / Had to look the truth straight in the eye. / She never said a word. She just walked away. / It’s always been my favorite goodbye,” the fading echo of loss still lingering in his voice.

Prior to his death, Olney explained of the song, “Someone you knew from the past appears to you in a dream and it all comes back—the longing and the loss. You are walking down a street and you think you see her, but then you realize it can’t be her, and it all comes back, the silence and the sorrow. Now, you are like a soldier condemned to die. Do you want a blindfold?” An artist through and through, even his spoken words ring like poetry.

“David wrote every song like it was his last,” agrees singer songwriter Mary Gauthier about Olney. “He put everything he had into all he did… 100% committed to the work. Losing David Olney in January 2020 kicked off one of the hardest years any of us can remember. He left us with this music, these stories, this beauty he brought forth from his magnificent imagination. I’m in awe and forever grateful.”

As Kaye and Gabriel continue on in Olney’s memory with the release of this album in March 2021, “My Favorite Goodbye” is an appropriate epitaph for Olney’s seminal and storied career. “David was particularly fond of this song and the recording,” concludes Gabriel. “It was one of the first songs off this record that he started playing live shortly after we wrote it.”

Fittingly, it’s the last song that Olney leaves us… hopefully fulfilling this to be, in fact, our favorite goodbye. 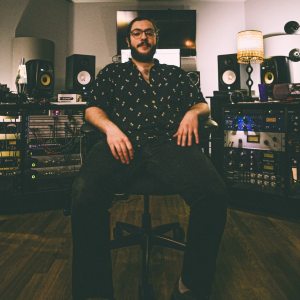