Just after Diet Cig released their debut LP, Swear I’m Good at This, in 2017, the pop punk duo decided it was time to re-relocate, having already swapped New Paltz for Brooklyn.

“We were touring a bunch and our sublet was ending and we were like, ‘Why are we paying New York City rent while we’re on the road so much?’ It felt kind of silly,” vocalist / guitarist Alex Luciano recently told American Songwriter of her and drummer Noah Bowman’s thinking at the time. “We really wanted somewhere we could hunker down and make music and have the space to create what we wanted to.”

Bowman puts it a little differently: “I feel like it was sometimes more stressful being at home than on tour. We were paying a stupid amount of money for, like, a storage unit.”

Diet Cig ended up moving to Richmond, Virginia, where they would go on to write their sophomore record over the course of 2019. That record, Do You Wonder About Me–out today–is just as feisty and raw as their previous releases, but Luciano considers it the band’s most confident and introspective release to date.

“I think that the new [record] is a little more self-assured—a little more confident and polished,” Luciano says. “It has a lot of driving, really strong instrumentals that are a little less frantic and jumping around than the last [record]. I think you can hear sonically that confidence that we have now. And I think thematically it looks inward a little more. That’s a pretty big difference–it’s a lot of introspective lyrics versus outwardly talking about other things around me.”

Tracks like “Priority Mail” and “Makeout (Interlude)” are tender and fleeting, while album singles “Night Terrors,” “Thriving,” and “Who Are You” feature Diet Cig’s signature guitar hooks and catchy vocals. “Broken Body” and “Stare into the Sun” both showcase the introspective writing and driving melodies that Luciano mentioned: “I’m saying cruel things every day to myself / Things I would never think to say to someone else / Why can’t I be on my own team? I wanna scream / I can’t remember the last time I felt good inside my head,” she sings in the second verse of the former. But the chorus of that track is even more cutting: “If my body’s broken / Does that mean that I’m broken too? / Call me, I’ll come over / But I know I won’t hear from you.” The album closes with a melancholy synth-driven reprise of “Night Terror”–the first song of this kind from a guitar-worshipping band that usually doesn’t veer too far from their power pop take on punk.

Luciano and Bowman also spoke to us about their dream Diet Cig bill and the evolution of their creative relationship with producer Chris Daly since their first release, 2015’s Over Easy (Daly is a longtime friend and collaborator of Bowman’s from his Earl Boykins days). Check out the full interview and listen to Do You Wonder About Me? below.

When did you write the songs on Do You Wonder About Me?

Alex Luciano: We really sat down and started at the beginning of 2019. I would say throughout the whole year of 2019 we had been working on the songwriting–not everyday, but sporadically throughout the year.

Was that in a studio or where you live or somewhere else??

Noah Bowman: A lot of it was at home. We have a practice space, so we can play in the house. We weren’t touring as much in 2019–by choice–‘cause we wanted to do another record. Even though we wrote a bunch outside of the studio, we tend to do a lot of writing when we’re in the studio as well, and we did a lot when we were at Headroom in September.

Alex: And at Salvation Recording Co., which is the other studio we recorded the album at with the help of our producer Chris Daly. He’s a great part of our team. He really helps a lot and is a good third ear to hear what we’re thinking and help bring it together into something cohesive.

Noah: We definitely trust and value his opinion. I feel like there’s a lot of times where we’ll have something and we’ll be like “This is dumb, right?” and he’ll either be like “Yes, it’s dumb” or “No, it works.”

I know that Chris has now been involved with each of your major releases. How’d you initially get connected to him? Has your relationship to him evolved as Diet Cig has evolved?

Noah: I’ve actually known Chris for a long time. I met him when I was 19 or so. I had done a record with him with another band of mine, Earl Boykins. We did an EP and we just kind of hit it off right at the get-go, then he became my go-to person. I ended up moving into the house where the studio was [located], and we became close. I’ve probably done–me, personally–like 10 records with him with different bands as well as Diet Cig.

Alex: I feel like our relationship with him really has evolved. When I first met him he was doing records for Noah’s old bands and he helped us create Over Easy, which is our first release. Even from that first release till this record we’ve kind of developed this language with him, and I feel like his and my friendship has really evolved. Noah has always been really close with him, but as we’ve worked on more records together I feel like him and I have really developed a really cool friendship and I trust him a lot with recording vocals. Recording vocals is so sensitive and can be very difficult. I just feel like every time we make a record together we understand each other’s ear and taste a little more. It’s been really fun to build a friendship that way.

What are some of those other bands you and Chris both worked with, Noah?

Noah: I did a couple with Earl Boykins, and I did a lot of session things that I played drums on. I don’t even really remember the bands. Because I lived upstairs, I would get a text from him the night before like “Hey I’ve got a band coming in, they need someone to play drums on it, can you come down?” So I’d be in my pajamas and come down and try to drum. Home Lives was one–that one was fun.

Where is that studio?

Noah: It’s in New Paltz, New York. That’s where we met–it’s a college town, so a lot of bands are coming in and out, doing records and EPs, which was exciting.

I wanted to ask about the makeout interlude on the album–literally called “Makeout (Interlude)”–which leads into “Flash Flood,” this loud, writhing number. How’d you shape the tracklist?

Alex: That was honestly one of the more difficult parts of putting this album together. We really agonized over the tracklisting for a couple weeks after we recorded, and I think in the end we realized our record has a lot of different dynamics. There are songs like “Flash Flood” that are really big and fast, and songs like “Makeout Interlude” that are really tender and slow and soft. We were like, ‘How do we make this work? How do we make this make sense?’ We really just wanted to lean into all those dynamics. We did them all intentionally and we love all these songs together, and we wanted to let the contrast of those two sounds really show with those transitions.

Alex you said in a 2017 interview that you “really look up to Alicia [Bognanno] from Bully,” calling her “one of those women in music who is doing everything on her own terms.” What are some other acts either of you look up to?

Alex: We look up to so many people–there are so many amazing musicians out there. One of my heroes is Lorde. I think she’s an incredible songwriter. Her songs are transcendent. I also really look up to Laetitia Tamko from Vagabond. She does a lot of the production on her new record. The sounds that she’s able to get are so beautiful and so amazing, and her arrangements are really incredible. She’s another one of those songwriters who really takes control of her sound and executes her recording so beautifully.

What’s your dream bill for a Diet Cig show?

Alex: I think we would love to tour for Lorde. She’s iconic. I feel like when Mitski toured with Lorde that opened the door for rock-sounding bands.

Noah: Paramore would be cool, or Hayley Williams who is now doing her own thing.

Alex: A lot of my favorite musicians right now are more pop-leaning, like King Princess and Sylvan Esso. I would love to see more shows that are mixing genres a little bit. We lean a little more punk rock but it would be such a dream to be able to tour with more pop-leaning acts, lending our pop sensibilities to the bill while still maintaining that punk rock sound.

Noah: Carly Rae! That would be cool.

Lastly, how does Do You Wonder About Me compare to Swear I’m Good at This?

Alex: I think that the new [record] is a little more self-assured—a little more confident and polished. It has a lot of driving, really strong instrumentals that are a little less frantic and jumping around than the last [record]. I think you can hear sonically that confidence that we have now. And I think thematically it looks inward a little more. That’s a pretty big difference–it’s a lot of introspective lyrics versus outwardly talking about other things around me.

Noah: The last record we wrote in between tours, so it was a little more frantic. We were just so go-go-go-go. While recording this new record we were like, “There’s not that many guitars on this record.” On the last record we had, like, so many guitars. We were like “Just keep throwing guitars on it! Make it big! Make it crazy!” but this time since we weren’t in such a frantic state we got to sit down and really think about guitar tones and what we wanted before we did it. There are songs with one guitar, whereas on the last record there would have been like four guitars doing the same thing.

Alex: We definitely spent a lot more time getting the specific, exact sound we wanted out of the guitar. On this record I knew a lot more specifically what I wanted the guitars to sound like, so it was a lot easier to communicate with Noah and Chris while we were recording how to get those sounds. And we didn’t need as much layering–we really honed in on each individual sound to be exactly what we wanted.

What’s an example of something you might say to Chris to get that guitar sound?

Alex: Oh my god–the vocabulary we use in the studio… Musical terms are really confusing for everyone unless you’re super educated, which we’re not. So we use a lot of adjectives that aren’t musical, like “I want this guitar to sound more slippery,” or like “I need it to be puffier or crunchier.” Or I’ll be like, “Can I get the top end to be shinier but the bottom end to be beefier?”

I feel like everyone knows what you mean when you say “I need this to be beefier” versus, like, “I need the 2k frequency to be bumped” or whatever. It’s a lot of descriptors that you would use for food.

Noah: Think about your favorite thing to make, then describe it. That’s guitar tone.

Do You Wonder About Me is out today via Frenchkiss Records. 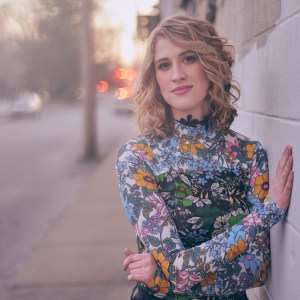 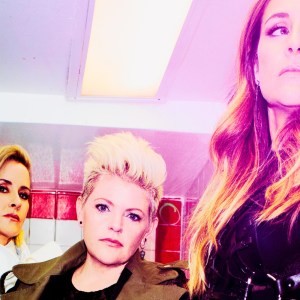