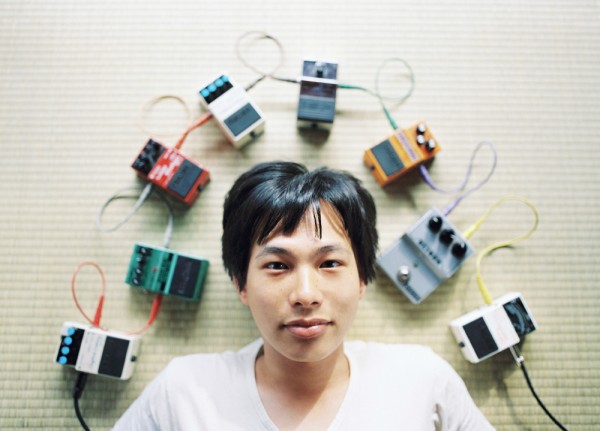 “My dad asked me what I wanted for my 15th birthday,” recalls Dustin Wong, smiling. “I said ‘a Telecaster’… and that’s the one I still use.”

It’s fitting, as Wong, now 30, is a master of getting ample mileage out of simple means. Armed with his standard Tele and a modest effects-pedal chain, the Hawaii-born, Baltimore-bred, Brooklyn-based musician creates cerebral, hypnotic soundscapes that often resemble the work of a bigger band.

Listening to Wong’s many-layered compositions calls for suspension of disbelief that something so cohesive and engaging could be made by one person with just a guitar. Then again, he’s been at it half his life, having first discovered loop-based music as a teenager growing up in Japan.

“A friend from high school downloaded this software… one of those freeware things for Windows 95,” Wong explains. “He pointed a mic at my guitar, I recorded a few phrases, he looped them, and I played on top of it. That was my introduction to multi-track recording, and I started writing music soon after.”

Composing and performing didn’t become serious pursuits until 2003, however, when Wong — after attending college in San Francisco — relocated to Baltimore, his home for the next several years.

“At the time,” he says, “I was searching for a place that really felt real. The Bay Area was too ‘nice,’ and I wanted something with a group of people who had a sense of rigor and competition. Baltimore was the grittiest, most authentic place I’d ever been. It had that aggression I was looking for.”

Wong’s arrival there dovetailed with the rise of a passionate do-it-yourself community centered around Wham City, a venue and art collective led by electro-pop rabble-rouser Dan Deacon.

It was there where he formed his first band, Ecstatic Sunshine; then, more notably, Ponytail, a co-ed foursome whose full-tilt art-punk merged the spastic energy of similarly-monikered San Franciscans Deerhoof with technical precision akin to math-rock outfits like Battles and Hella.

Ponytail “was a lot of fun,” Wong says. “I’d never been in a band that was so serious about playing shows and touring, but it worked well. We wrote really slowly, though, and towards the end, it got boring playing the same songs every night.”

Once the group ended its five-year run in 2010, Wong — having already started writing new material on the side — began anew as a solo artist. Before long, he’d acquired a small but dedicated following among like-minded musicians. In the fall of 2011, one such fan — Jon Davies, of Liverpool, U.K. — reached out with an unusual, exciting proposal.

“He emailed me asking if I’d come out there to play a whole concert of my songs with an orchestra of 12 guitarists,” Wong remembers. “I thought he was being grandiose and just brushed it off, like ‘yeah, yeah, that’d be great, let me know’… but then he did let me know. He actually made it happen. It was a bit crazy!” (Watch a video of the performance here.)

“Whenever I see a good band play live, I get that feeling of wanting to be in a band again… so I’m looking to collaborate more with a bunch of people. Besides, I simply can’t push this sequence of pedals any further. I feel I’m like that with any project… that it has a three-album limit.”

Wong lives in New York now, though at the moment he’s in Japan supporting Toropical Circle, a keyboard and drum machine-driven collaboration with musician, composer and friend Takako Minekawa. Come fall, he’ll return to the States to tour the new record and continue meditating on his next move.

Whatever that might be, Wong knows for sure that the D.I.Y. circuit is the right backdrop for his intimate music and low-key personality. Last year, he supported indie stars and fellow Charm City denizens Beach House on a U.S. tour of 1,000-plus capacity clubs, an experience he looks back on with some incredulity.

“It was insane to play to that many people, “ he says, eyes widening, “yet I realized I didn’t want that at all. You’re on a bus all night, then get to the venue, wake up, eat, soundcheck, wait, play, drink, and get back on the bus. You don’t get to see the cities much, except for maybe a couple-block radius around the venue. I had fun playing for such big crowds… but that life just didn’t really appeal to me.”