EMM has a vision, and she’s unafraid to see even the most ambitious projects through to the end. With a trilogy of new music videos, the first of which is out now, the electro-pop upstart mounts a 28-location filming spree to tell her story─all centered around her addictingly biting song “Adderall.”

“I made a few guidelines for myself starting the project. The most important one was that I was going to give it my all and not worry about the time it took to get it all done. This project wasn’t about speed or ‘quantity over quality,’ which is a pressure artists face a lot,” she tells American Songwriter. “It was about following my intuition and my vision, whatever that meant overcoming and however long that took. I stayed off social media for a year so I wouldn’t be pressured into rushing the project out. I wanted to make something that was the very best thing I could make with the resources I had. And I feel that I did that.

“I thought it would take me four or five months, but it took me a year. We shot all three acts of the story at the same time so it was a little bit of a mess. But all art is messy when you’re making it, right?” she adds, rhetorically.

One of her favorite days shooting occurred while trekking through the Henry Cowell Redwoods State Park, located snuggly across Santa Cruz Mountains. “I woke up at 2 a.m. at the hotel so we could get to the forest and be shooting by sunrise. No one was around for miles and miles, and it was a very quiet morning,” she recalls.

With permission to shoot before the park officially opened, EMM was only joined by co-director/director of photography Kevin Sarrico. “It was still pitch black when we arrived and out of nowhere, in the silence while we were getting our camera ready, a tree in the forest fell. It was so loud it sounded like lightning hit right next to us in the dark,” she continues. “Then, we walked through the redwoods in the dark to our location. When we left after shooting, people were arriving for their hikes, and I was in full costume with a bloody face coming out of the woods. They looked pretty freaked out. We had a lot of days like that. The big days with a large crew and cast are more stressful. My favorite days were when it was just Kevin and I in some precarious situation.”

Conceptually, the first video witnesses EMM transform into various video game-inspired characters, from Emerald to Ruby to Diamond, demonstrating heroic female figures “that are multi-faceted and vulnerable. Vulnerability is so central to courage. A lot of people show female hero characters as being strong all the time, when in reality what makes us strong is the daily overcoming of weaknesses and heartbreak and sorrow,” she describes. “I wanted to show that side, too, in the story.”

While drawing upon such real-life influences as Dolly Parton, Beyonce, Reese Witherspoon, and Mariah Carey, among countless others, EMM looks back to her early love of fiction, as well. Her favorites—including “Lord of the Rings,” “The Chronicles of Narnia,” “Wonder Woman,” “Black Widow,” “The Matrix,” and “Kill Bill”─melt together into her own sci-fi action/fantasy. Not a gamer herself, EMM does find great enjoyment “watching my fans’ video game music videos that they make to my songs,” she says. “They’re incredible and really inspire my fashion and visual ideas. My favorite book, ‘Hinds Feet in High Places,’ has a scene that was integral to my story. The concept of the visual project is very much based on one specific famous story but I’ll let the fans figure out what one.”

“Adderall,” co-written with Taylor Wilzbach and Zoe Fisher, taps into gaslighting and the constant struggle for women against a patriarchal system. The trio’s collaboration together was notably electric. “The three of us work so well together. Taylor and I have very similar taste in production. It’s so easy to work together because a lot of times one of us will have an idea and before we even say it the other person is trying it,” explains EMM. “Zeo thinks of some of the most interesting melodies that I would never think of. She listened to Gregorian chants regularly as a child, so her mind is open to certain ways of moving melodically that I would never think of.

“I get veto power on everything, but I generally try to follow Rick Rubin’s model of trying everything, even if it sounds like a weird idea. It’s hard, but we all have to set our egos aside and just test ideas because you never know what will actually be super cool. For example, I was terrified of doing the operatic falsetto verses at first,” she continues, “but that’s what came out in the scat, and it was really different from what we’ve heard other artists do. They encouraged me to go for it, and we all liked it. I don’t think I would have been so risky if they hadn’t been there encouraging me. We all try to bring the best out of each other.”

Lying in the song’s core, EMM’s emotional journey to and through healing is palpable. “The more I’ve healed and worked through my issues, the better I’ve gotten with seeing through the bulls***. I have some really solid friends on their own paths to healing,” she says, “with backgrounds similar to mine that can help me see clearly when I feel off-center. I call them sometimes. The more I start to love myself the more I stand up for myself. I set boundaries. I say no. I call people out. I cut people off. I protect myself like I would protect someone else I love.”

Speaking of which, EMM underwent a particularly difficult relationship, a moment in time that taught her plenty about addiction and how to safeguard her heart. “It’s a disease,” she remarks, outright, about addiction. “I still love people that happen to be addicts. But there has to be some serious boundaries set for my own protection and health, especially when that person doesn’t have a desire to heal or get help. Trusting my own intuition more than the voices of other people─especially abusive or sick people─is crucial. And it’s a lesson I learned then and am continuing to lean into now.”

As much growth as she’s seen, there are still times when she finds herself slipping back into her trauma. “When I am triggered, I go for walks. I pray a lot. I journal. I do therapy. I meditate. I take CBD drops. I write songs. I cry when I need to and acknowledge what I need to. And I speak to my inner child a lot and walk through feelings with her. That one is the biggest help for me.”

Another song, “No Gods,” swings for another vibe and mood entirely. You say God picks presidents / No conscience, no consequence, she spits, taking perfect aim at the last four years in the United States.

“I hate being boxed in by genre. That’s why I’m calling my projects ‘mixtapes’ and not ‘albums,’” she says. “The chorus of [this song] is so simple that it’s easy to miss how deep the song actually is. I wrote it about how people use ‘God’ to justify all the things politically that their ‘God’ doesn’t actually stand for: helping the poor, standing up for the people that the system has let down, loving and supporting people that don’t fit into traditional molds, standing against oppression, fighting for justice. These are the things that made me love my faith. I’m just sort of like, do you have any idea what the Jesus you claim to follow actually stood for?”

“No Gods” and “Adderall” sample a forthcoming mixtape, titled SAPPHIRE, expected later this year. “For [this mixtape] and the visuals, I learned so much. Mostly I freed myself to do whatever I wanted, instead of trying to follow any rules,” she says, noting one of her new favorites, a yet-unreleased track called “Catch Me If You Can.”

“I sat in a room alone, zoned out with a mic and a four-bar loop and just wrote whatever popped in my mind for six hours straight. The vocals are crazy on there because I didn’t box myself in. I just made as many musical vocal backgrounds and ad libs and effects as I wanted,” she says.

Originally from a very small town in Michigan, EMM is classically trained and mines perhaps “crazy ideas… only a musician will totally get and appreciate,” she says. The singer-songwriter began releasing music with 2016’s Burning in the Dark, setting the stage for an impressive output, mostly of singles, across the next five years. Emerald arrived in 2019, and Ruby one year later.

Through it all, she remains true to form, even daring to “invent a crazy visual story that you have to spend 14 minutes watching to understand in the age where the attention span is six seconds,” she quips. “But my creativity is my superpower. I’ve stopped dumbing my art down for others. I don’t have nearly as much fun when I do.” 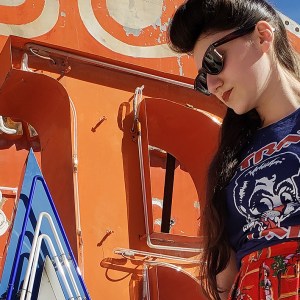 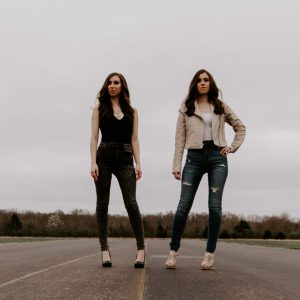