Almost everyone has a favorite song. Often they’re songs that give them strength and hope and help them endure hard times. Sometimes they’re ones attached to the most momentous chapters of their lives, joyful or tragic. People define themselves by favorite songs. It shows us how much power songs have in everyone’s lives. So we delved into the various sources that exists to discover the favorite songs by luminaries across the decades. What follows is an aggregate of these which we’ve discovered in the last month.

Most of these are easily verifiable, but there are a few of the older ones which have only one source, and might be faulty. If so, apologies. Feel free to inform us of any erronenousness.

Do you have a favorite song? If you would like to share with us for the follow-up piece to this, Favorite Songs of Readers, we invite you to send them. Also, let us know if we can use your name, and also, if you don’t mind, your profession and where you live.

Send them please to paul@americansongwriter.com.

Marilyn Monroe
“Who Cares?” By George and Ira Gershwin.

It was Judy Garland’s performance of this song by the Gershwin brothers that was reported to be Marilyn Monroe’s favorite. When going through tough times, especially, she’d play it very loud, over and over.

President Kennedy loved this song more than any other. It was Walter Huston’s 1938 record that he played often. Kennedy also sang the song at parties, as he did at the Kennedy mansion in Palm Beach on the Saturday before he took his last trip, to Dallas. His aide Dave Powers said that JFK sang it “better that usual” that night.

FDR
“Home On The Range.”

Al Pacino
“You’ve Got To Be Carefully Taught’ by Rodgers and Hammerstein.
“It was a crucial time in our country’s history,” said Pacino, “when the racial tension in the south was raging and the play (‘South Pacific’) was a direct reference to it. I thought it had a real passion in it and a relevance to the times we were living in.”

Johnny Carson
“Here Comes That Rainy Day,” by Jimmy Van Heusen and Johnny Burke. It was Sinatra’s version that Johnny loved best. On his final night of The Tonight Show, Bette Midler sang it for him.

Gerald Ford
“The Navy Hymn [“Eternal Father, Strong To Save”] by William Whiting.

David Letterman
“Everlong” by Foo Fighters. [For our full story of Dave, this song and Foo Fighters, see Everlong.]

Gene Wilder
“Somewhere Over The Rainbow” by Harold Arlen and Yip Harburg. Wilder died at his Stamford, Connecticut home on August 29, 2016 at 83 as this, his favorite song played, as performed by Ella Fitzgerald.

Paul McCartney
“God Only Knows” by Brian Wilson
“`God Only Knows’ is one of the few songs that reduces me to tears every time I hear it,” said McCartney. “It’s really just a love song, but it’s brilliantly done. It shows the genius of Brian. I’ve actually performed it with him and I’m afraid to say that during the sound check I broke down. It was just too much to stand there singing this song that does my head in and to stand there singing it with Brian.”

Stephen Hawking
“Have I Told You Lately” by Rod Stewart. In 2015, Hawking answered many questions on Reddit, including what his favorite song is.

Andy Warhol
“All Tomorrow’s Parties” by The Velvet Underground.

Bill Gates
“Under Pressure” by David Bowie and Queen

Taylor Swift
“You’re So Vain” by Carly Simon.
“After hearing that,” Taylor said, “it was like a key had just unlocked this forbidden area of storytelling for me. You can say exactly what you feel, even if it’s bitter and brazen!”

Barack Obama
“Ready or Not” by The Fugees.

Mark Ronson
“’Fools Gold” from The Stone Roses.
“I recall hearing it,” said Ronson, “and it changed my entire musical perspective because it was a combination of New York hip-hop and British pop melody. It had that amazing sampled breakbeat with this haunting, incredible melody delivered by Ian Brown.”

Roger Ebert
“I’m Your Man,” by Leonard Cohen. Roger said it was the song that saved his life, as he explains in the video below.

Dr. Sanjay Gupta
“Born To Run” by Bruce Springsteen
“I think about motivating music when I exercise,” said Sanjay, “and the song that’s been on my playlist since college is ‘Born to Run’ by Bruce Springsteen, Usually when I’m at the end of my run, and I feel like I can’t go anymore, that’s the song I’ll flip to on my phone. There’s no way I can stop running as long as that song is playing.”

Angelina Jolie
“Know Your Rights” by The Clash.

Norah Jones
“Everybody Knows This Is Nowhere,” by Neil Young

Ozzy Osbourne
“A Whiter Shade of Pale” by Procol Harum.
“When I hear that haunting melody on the Hammond organ,” Ozzy said, “I immediately become transfixed.”

Tony Blair
“Ave Maria,” by Renee Fleming.
“The song itself is extraordinary,” said Blair, “full of poignant emotion. At a time when a close friend was dying, I used to play it and the peace and serenity of it was a source of comfort.”

Megan Fox
“House of the Rising Sun,” by The Animals’

Jools Holland
“For Once In My Life” by Stevie Wonder.
“Every element of the song is amazing,” said Jools. “What the bass plays is fantastic. There’s the drums, the two guitars, then there’s the strings… the whole world musically is in that song. It inspired me as a musician and a songwriter.

Sean “Diddy” Combs
“It’s Like That’ by Run DMC.
“For me,” Diddy said, “it was young, it was strong, it was black, it was powerful. It was hip-hop and it made me feel like I could do anything.”

Bill Nighy
“Things Have Changed,” by Bob Dylan.
“The fact that I find this song inspiring,” Nighy said, “could indicate that I am not in very good shape, given that it contains some grim observations of how bad things can get. What is uplifting, apart from its general brilliance, is that it is thrilling to know that you are not alone in these matters.

Do you have a favorite song? If you would like to share with us for the follow-up piece to this, Favorite Songs of Readers, we invite you to send them. Let us know if we can use your name, and also, if you don’t mind, please indicate your profession and where you live. Send to paul@americansongwriter.com. 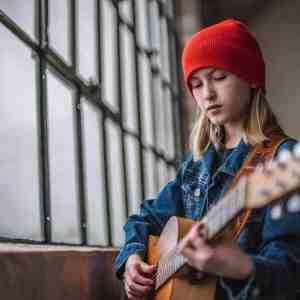 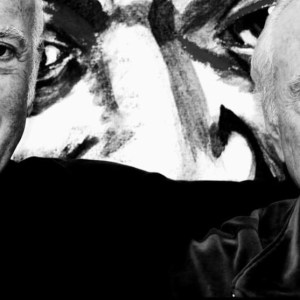