It can be a curious thing when an established artist opts to do an entire collection of covers. It can be interpreted in various ways, based on whether it’s intended as a stopgap effort that allows an artist to bide his or her time before coming up with the material needed for their next album, or perhaps, simply a show of respect for the voices that influenced the artist early on.

In the case of former Band Of Horses guitarist Tyler Ramsey, the idea of his new covers EP, Found A Picture Of You, offered an opportunity to follow up last year’s stirring Fantasy Records debut, For the Morning, while also offering an homage to some female artists that he’s respected for quite some time.  Among the highlights of the six song set — consisting of five remakes and one rerecorded original (an acoustic revisit to his lovely lament, “1000 Black Birds”) — are a touching take on Cyndi Lauper’s “All Through the Night,” an appropriately hushed version of Innocence Mission’s “Tomorrow on the Runway” and a relaxed yet reassuring rendition of the Pretenders’ “Back on the Chain Gang.”

“A lot of set lists that I write for my shows include one cover song,” Tyler explains. “I always pick these based on my personal connection with the song and whether or not I can fully relate to the lyric and the mood. Over the years I have found that a handful of these covers have stuck with me. and I became attached to them. They mark phases I’ve been through. This collection is made up of songs that have become a part of my shows and ones that I feel I’ve been able to really interpret in my own way.”

Indeed, his interpretations offer new opportunities to refocus and refresh these songs in ways that might at first appear unexpected, but even so, eventually allow for a newly nuanced perspective.

“I think the hardest part about playing a cover song is selecting the ones that apply to me —that I really feel,” Ramsey reflects. “The other main challenge then is always to make sure I am doing an interpretation of the song, and not recreating the original. I never understand it when musicians cover another artist and don’t try to make it their own. When I hear that, I usually go immediately to listen to the original version.”

Ramsey’s succeeded at his mission. These lithe and lilting readings are mostly unblemished, and though Ramsey secured the assistance of special guests Carl Broemel, Avi Kaplan, Thad Cockrell, Billy Alletzhauser, and Jeremy and Jonathan Lister, and Ramsey’s daughter Sylvie Opal Ramsey, it’s his supple sound and quiet, contemplative mindset that fully comes to the fore.

“This EP project was purely for fun.,” Ramsey suggests. “I really wanted to do something that wasn’t overdone. I have also wanted to capture these songs for quite some time, and when the opportunity came, I jumped at it. Momentum has never been a goal for me. I try and put a record out when it is ready to be put out.”

Ramsey demurred when asked his reasons for leaving Band of Horses, but suggests instead that his path forward as a musician and songwriter remains his main focus. “I always try to better myself as a writer and as a performer,” he says. “This is a lifelong path and I’ve always had patience for where I am, and where I am headed…The goal is to just keep moving forward, trying to get better at writing and improving my guitar playing. I never cared about rock and roll dreams or anything. There was a moment I remember years ago that stuck with me —I was waiting outside an old Asheville venue called Be Here Now for a performance by one of my musical heroes, Leo Kottke. Up drives Leo alone in a rental car, and he parks in front of the club. He got out and said hello to the handful of folks that were out there, walked around and popped the trunk, got out two guitars, went into the venue and blew everyone’s minds. After the show he drove off to whatever was next. I wanted to be able to do that.”

It’s little wonder then that Kottke and guitarist Michael Hedges figure quite high in Ramsey’s list of instrumental influences. “I love composition for solo guitar,” he insists. “Country blues was also massive for me and made me want to learn more about the history of guitar music. And then there’s the songwriters —  Joni Mitchell, Neil Young, Townes Van Zandt. This could be an endless list; there’s always a song to listen to and feel and study.  Always something to aim towards and always something to push you to be better.” 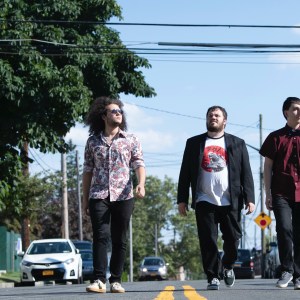