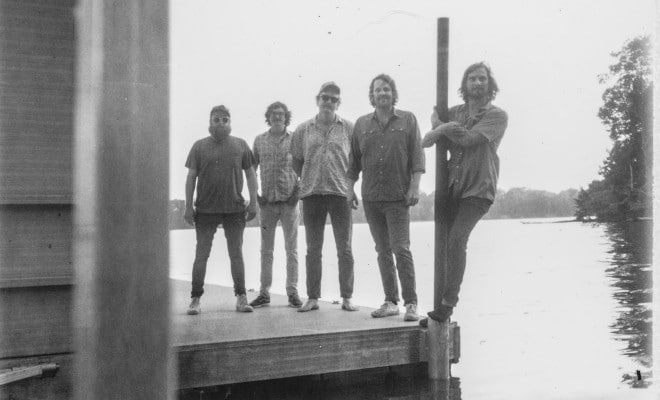 On a recent tribute show to the music of 1969/1970’s Atlanta Pop Festivals, Athens-based band Futurebirds chose to cover “Lodi,” the Creedence Clearwater Revival’s hit about musicians slogging it out on the endless highway. It’s a topic they know all too well.

The quintet celebrates its 10th anniversary (their Hampton’s Lullaby debut was released in 2010) and you can be sure they played a lot of shows where “people sat there drunk,” as the song goes. Call their music “cosmic country” or “psych-country” as their press releases do, or just the catchall of “Americana,” but Futurebirds have maintained a vision of their guitar-based, alternately dreamy and freaky sound for the past decade. It has been five years since the band’s previous full-length (four since 2016’s Portico EP), and the time spent crafting these dozen tracks shows.

Sure there is plenty of obvious influence mixing My Morning Jacket, Poco, Eagles, Buffalo Springfield and — name your favorite country rock act here — to Futurebirds’ often ethereal yet always rootsy approach. But it’s the sheer quality of the sweet and salty songcraft that raises the bar for these guys, like how they ramp up a darker edge such as in the twisted electric guitars that close out the honeyed “Crazy Boys.” Even when rocking out on the mid-tempo “All Damn Night” they reign in the galloping sound, keeping the reverb high, and the vibe low key as the melodies sneak up on you and pensive harmonies push the song into psychedelic areas. “Picking up Strangers,” a song musically indebted to “Lodi,” enhanced by horns and vocals both lived in and melancholy dips into swampy waters. Subtle yet taut brass also augments “Wear It Out,” the disc’s most soulful track helped by a soaring sax solo. It, along with the hooky chorus and scampering country shuffle of “My Broken Arm” with its “The money’s no good” refrain, jumps out as an obvious single. The tempo of the latter gallops along like a horse trotting around a track as a pedal steel cries, infusing a melancholy vibe.

But it’s the closing “Waiting on a Call,” with an unexpected almost metal guitar clang, that shows how Futurebirds’ brings a diverse musicality. They effortlessly shift from laconic to propulsive and back again, enhancing their earthy, organic attack. The group isn’t aiming for big ideas as they state in “Trippin’” (“We don’t want to change the world/We can barely change the sheets on our bed”), but they capture the smaller, more intimate moments of life with artful perfection.

The disc’s title implies the camaraderie these guys display. And after a decade cranking out their music across the country, Teamwork feels like well, a team effort. It’s a culmination of nonstop roadwork and the band’s finest effort yet.