When the new JBL IRX-112BT was announced, I was a little perplexed as to the type of user they were trying to reach, given that their brand has a variety of speakers across several categories, including the acclaimed EON series. But after taking it for a spin on a few real-life gigs (live shows!), I understand a little better- it’s designed for you, the solo singer/songwriter, who just needs an affordable, one-trip plug and play setup and doesn’t want to have to be a sound engineer on a gig.

Of course, there are other real-life scenarios where the IRX will work splendidly. Public speakers, gym instructors, DJ’s and house parties would do well with all this unit offers, particularly the music ducking and Bluetooth 5.0 functionality, which we will discuss in a bit.

Here’s a quick run-through of the speaker’s specs: The IRX-112BT features a 12” speaker housed in a molded enclosure with two independent channels each controlled by gain knobs, one main master volume and a thru output to run either another speaker or a subwoofer. The two gain knobs work independently for each channel and are Neutrik ¼”/XLR combo inputs. There are two handles, one on the side and one on top, for easy carrying options. And, at 27.5 pounds, it was a light enough, easy on the back speaker compared to others I’ve lugged to gigs. There’s also an 8″ version with essentially the same features and weighing 17.4 pounds. 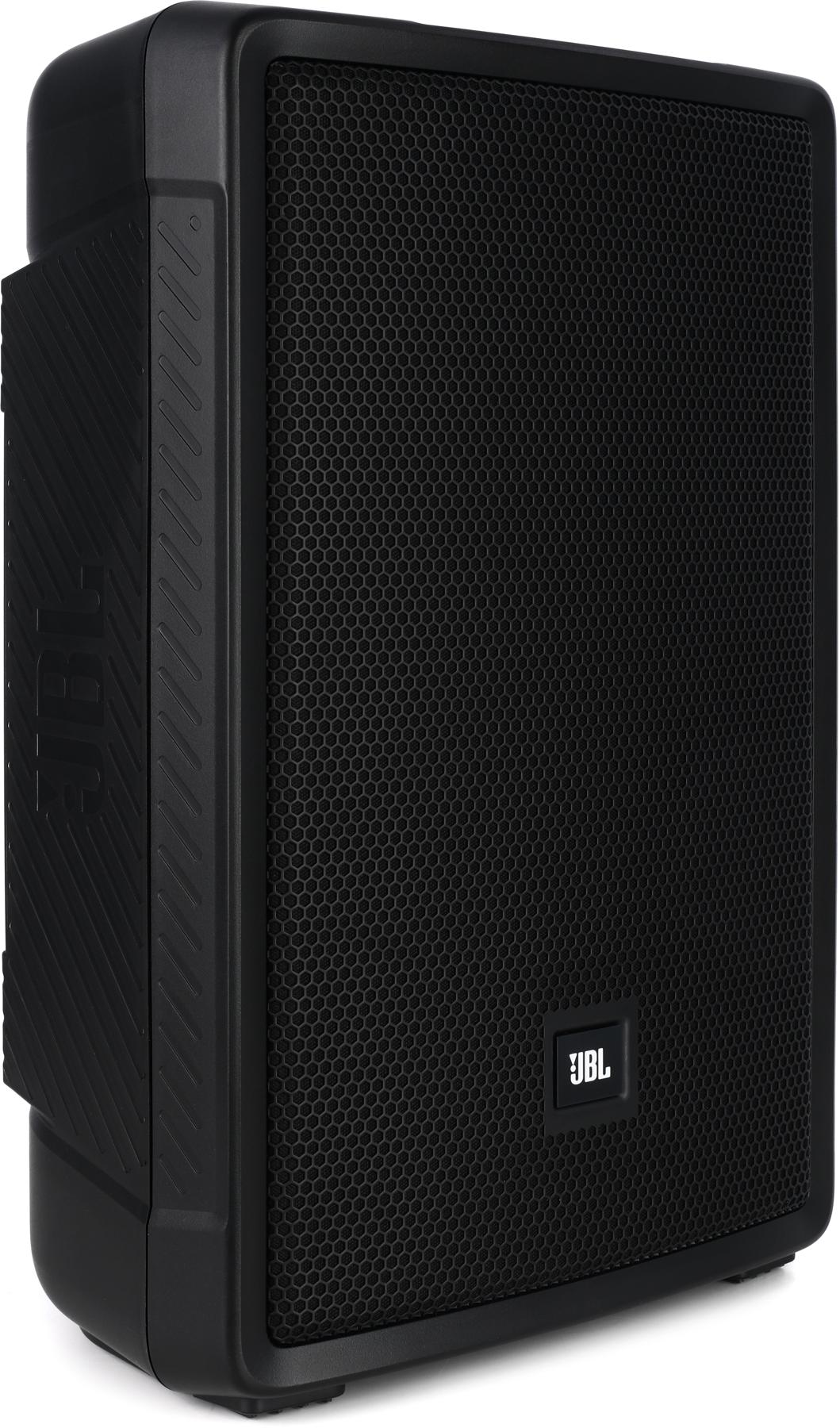 In place of a mic/line switch, each channel’s sound level works within the knob itself, with the line source (an instrument, for example) starting at the bottom (6 o’clock setting) and turning all the way to the top 12 o’clock position. The mic section runs from the top to the bottom on the right-hand side down (12-6 o’clock). A visual guide around the knob lays out how the channel’s gain structure increases/decreases with the mic/line source.

This setup confused me at first and got the better of me out of the box. Setting up quickly at the first gig I cranked the guitar channel to around 3 o’clock, turned the guitar volume up, and the sound was distorted. Operator error! Since it is a line source, the preferred setting is on the right side below the 12 o’clock level, which quickly produced a pleasing tone when dialed back. The vocal microphone works from the 12 o’clock setting down the left side.

The master volume controls the overall sound of the two channels plus any Bluetooth signal that it receives. Volume for the Bluetooth signal is controlled from that source, i.e. phone/tablet.

The Bluetooth 5.0 is for streaming music and connecting two speakers together. Note that there is no 1/8” input on the unit so any pre-recorded music from a phone or tablet has to be via Bluetooth, or by using a 1/8″ to ¼”/XLR adapter into Channel 1 or 2.

There are four tonal presets: Music, Vocal, Speech and Flat settings. Each have different pre-programmed contours for dialing in a sound at the push of a button. There’s a bass boost – good for parties and adding the extra thump, AFS feedback suppression (on and off) and music ducking which allows you to talk over any music that’s playing.

We only ran acoustic guitars and vocals through the system for our gigs so we can’t comment on how a fully mic’d band with drums and electric guitar, using a separate external mixer, would sound through it. But it does have enough air and depth that it shouldn’t be a problem, especially since it handles pre-recorded music well.

The dual-channel setup of the IRX proved a lifesaver at one duo gig, as our mixer for a four-input band was accidentally left at the studio. We were able to have one person use the IRX’s two channels and start the show while the other ran back to the studio to get the mixer, head hung in shame at his forgetfulness!

I found this setting to offer the best balance and fullest sound for a simple guitar/vocal performance (with a little room available for adjustments to different room sizes):

Once I realized how each channel worked, it was smooth sailing and setup time was cut down to just a few minutes. And the sound? Full and clear. The IRX projects nice definition, bottom end and separation of instruments. In fact, it sounds more like what a 15” speaker would sound like.

On the downside, there are no effects within the speaker, though if you use an external mixer with built-in effects you’re covered. And our outside gig proved to have enough natural reverb that it wasn’t needed.

There’s no app either but honestly, there’s not much for it to do anyway that you couldn’t do with a quick manual adjustment. And, as noted, there’s no 1/8” input if that is something you absolutely need and have no adapters or Bluetooth.

For live performers in a solo setting, the JBL-IRX112BT is worth a listen.