Currently on tour with Killers frontman Brandon Flowers, amiable Scotsman Travis Healy, of the multi-platinum rock band Travis, took some time out to discuss with us his debut solo album, Wreckorder, a short while back. Wreckorder boasts great songs and atmosphere, as well as guest appearances from Canadian siren Neko Case and a little known, bad ass bassist named Paul McCartney.

Did you subscribe to the philosophy that the solo album should sound radically different than your band?

Whenever I sit down to write, I don’t ever sit down with any agenda, because I think having an agenda when you’re writing a song is… I think there’s two schools of songwriting. There’s songwriting by design, and there’s songwriting by accident. And I subscribe to the songwriting by accident; you’ve got to sit down and not have any sort of rules, or any idea of how the song’s going to be before it actually is written or completed. This has always been the way with me, so with this album, it’s no different. For the solo record, I think the only difference would be the motivation of having something new to write for. It made it a little bit easier to get started. First gear was a lot easier.

The Beatles are important for everyone. They were the frontiersmen of modern pop music songwriting, that wasn’t just… they have their fair share of “I love you, you love me” type songs. And even those songs, for the Beatles, were much more cool and complex than the run of the mill stuff of the time. You can’t be a songwriter and not feel that you’re standing under their shadow. To work with Paul was great. He’s a gentleman, just for agreeing to do this in the first place, it’s a huge deal. He gets up every morning, he knows who he is, he knows he’s Paul McCartney, and he knows what a big deal it is for him to be on someone’s record. But I think I was a little bit more normal for him, because I wasn’t asking for him to sing on it, I wasn’t asking for his face, I was asking for his bass. Personally, I think he’s one of the greatest living bass players in the world at the moment. You have John Entwhistle who passed away, and James Jamerson, he’s dead, and McCartney. Because he’s such a great songwriter, his bass playing is something that’s overlooked. He’s amazing. And the bass playing he does on this song is really great, I was so happy with that. And he used the Hofner that he used on all of the Beatles’ songs. His guitar tech confirmed that one.

Nice. What was working with Neko Case like on the album?

Cool. She’s a great singer. I met her at a gig in Berlin, which is where I live, and after the show I went and said “thanks for the show, you’re brilliant,” I found myself asking her if she would be interested in a duet with me. While Im’ in the midst of saying this, my brain is going, “Why’d you say that?!? Don’t ask her that!!”

And I found myself speaking before my brain would allow me. But she was really sweet. She said, “What a great idea, I’d love to do that.” And then I realized I didn’t have a song, so I had to go and write a song. So I went home and wrote this song, “Sing Me To Sleep,” and then we went to Vermont, which is where she’s based, and we set up a little portable studio, just a microphone and a laptop, and we opened Pro Tools. She sang like a bird. She’s amazing. She’s so gracious and she looked after us. We were very well lookedafter.

Can you crank a new song out pretty fast, or do you spend a lot of time working on them?

It depends. If it takes you ages to write it, then it’s probably going to be shit. If you write it and it writes itself in ten, twenty minutes, then it’s going to be fine and it’s going to last long; it’s going to have a slow burn. And that’s generally what I’m looking for. I’m very much about trying to find melody that I’ve not heard before. The lyrics are a secondary thing for me. Not secondary as in it’s not important, but it’s the melody that comes first. If you write a good enough melody, then it’s almost like a magnet that attracts certain phrases or certain words towards it. And then the next stage is the easy part, which is like doing a medium-difficulty crossword from The Guardian. You’ve just got to fill in blanks and it writes itself. So finishing it, the key words can only come when you’ve got enough melody. And then it happens very fast.

You recently shot a video for “Buttercup.” Is it true that you got a bunch of ex-girlfriends to be in it?

No, not literally my ex-girlfriends. Basically, I’m confronted by all my ex-girlfriends, but they’re not actual ex-girlfriends (laughs). It’s almost like a ghost of Christmas past thing. There are a couple little kids in there that are supposed to be like my first hug, my first crush, my first kiss, and it’s really cool, a really great idea.

That sounds awesome. I thought you went really high-concept there and got everybody together.

All my exes, no. It’s good, though, because I kind of got a nice selection of people to come. None of them were actors, just people that we knew, all different ages, all different types of girls. I think it’s going to be great.

Do you enjoy playing solo acoustic on tour?

Yeah. The songs that I can play acoustically, they stand up really, really well just by themselves, and I haven’t really had that opportunity before. So I’m bringing some of the old songs I’ve written for Travis and mixing them with new songs. I’ve already played about six shows, the best one of which was in Vancouver, when we played in the Vogue Theatre. Everyone was very quiet. I opened the show and thought, I’ll just stand at the end of the stage and just sing the song without any amplification. And then, during the opening song, in my brain, I was thinking, “I could do this whole show off mic.” And I’m thinking, “Oh, should I do this? It’s quite a commitment, cause it’s like a 90 or a 110 minute-long show, and would people be able to take that for such a long time?” And in the end I thought, I’ll do the second song stripped as well, and I thought, I can do the whole gig like this. It was one of the best gigs I’ve ever done, cause people, for the first time, can actually hear the lyrics, you can hear the fades.

I think amplification can sometimes get in the way of you actually hearing someone on stage, because it’s too loud. The sound’s coming out of the speakers, and the sound of that person onstage is not equal. It’s a thick, giant sound coming out of the speakers, and there’s a tiny little person standing there. The old theatres are built for unamplified performance, so I went for it, and people just loved it. So I’m going to try to do that again a few times in the next couple of months. I’m enjoying not having a band at the moment. It’s nice to be by myself, because I’ve been in a band for fourteen years, and it’s so nice to have a change of pace.

One of your most famous songs is “Why Does It Always Rain On Me.” When it actually rains on you, do you sing that song in your head?

Yes (laughs). With expletives in there. 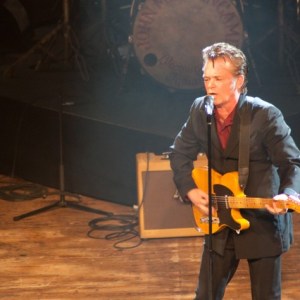 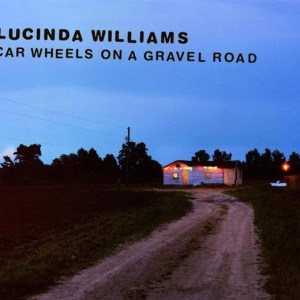