Most publicists would agree that there is never a great time for a name change, and Emily Frantz (vocals, fiddle) and Andrew Marlin (vocals, mandolin, guitar, banjo) of Mandolin Orange concurred. But, over a decade into their marriage and career as a folk duo, the acclaimed musicians felt restricted by their chosen name —suggesting it was due time to shed their skin.

Molting their previous moniker is not a disassociation from their imprint as beloved roots duo, Mandolin Orange. Rather, the transition left them bare and vulnerable, allowing for regeneration into their expanded exoskeleton, properly fitted to accommodate growth.

“Traveling is an amazing informer. And we’ve done a lot of that over the past 12 years,” Marlin tells American Songwriter. As a representative for the duo, the artist explains, “We’ve met a lot of people and seen a lot of sights. Over time, we’ve just solidified what we’re doing artistically —but also as people —that we never could have imagined we would do when we were 21 years old when we were just starting out and came up with the band name.”

Their re-introduction as Watchhouse began on August 13 with the release of their self-titled record via Tiptoe Tiger Music/Thirty Tigers. Since 2009, the pair of kindred spirits have expanded their artistry from front porch pickin’ in their home of Carrboro, North Carolina, to selling out iconic venues across the world. Their debut album, 2010’s Quiet Little Room, introduced Mandolin Orange as staunch traditionalists and began their enduring campaign of distilling roots music for an emerging generation of listeners.

Following Mandolin Orange’s last album, 2019’s Tides of A Teardrop, they continued down the creative path toward their new LP, Watchhouse. Some of the songs from the nine-track collection date back to 2018, coalescing in a sonic cohesion completed in February 2020, right before the world shut down. “It’s kind of wild to think about,” Marlin laughs. “We were so hopeful then.”

It wasn’t until March of 2021 when the pandemic stopped them in their tracks that they decided to change their name. Marlin says, “We’ve been pushing this thing, going around singing as much as we can for people, and always felt we were working towards something.” In the pause, Frantz and Marlin found that there was no end.

“We’re not working towards something, we’re just working, and we either enjoy it or we don’t,” he adds. “And so we finally realized if we were ever going to change our name, then we just have to do it. There’s never going to be a time where it’s like, ‘Yeah, this makes total sense to change your identity.'”

Reflecting on this pivotal moment in their career, Marlin continues, “When people asked us why we wanted to change the band name, the answer we give is ‘because we wanted to.’ We do what we do because we enjoy it. We thrive on it, especially getting to share our own experiences and views with people who are willing to listen to our records. And so if we feel like we’re not being honest with ourselves, how can people derive any honesty from what we’re doing?”

Marlin insists the decision is not an effort to reinvent themselves. Instead, he says, “It’s more just trying to fix the foundation so we can continue to build upon what we’ve already been building.”

Under their new moniker, Watchhouse spares the palpable intimacy of their sonic chemistry exhibited for over a decade as Mandolin Orange. Opening this new chapter meant Marlin —who has produced each of their six previous records —must relinquish some of the sonic responsibility on their new album. When the duo brought on acclaimed producer Josh Kaufman (whose previous work includes Taylor Swift, The National, Bonny Light Horseman), they knew their musical child was in good hands.

One pride-point from this project, he feels, was opening a song up for his bandmates to feel “a little more free within the confines of a tune.” Without having to stick within certain parameters, the live recordings of each song capture improvisational moments that exalt this collection from their previous work.

“Everyone’s got an ego that they’re bringing to a project,” says Marlin. “And Josh has a way of setting your ego at ease —just being like, ‘Hey, man, you’re valid, you’re crushing it right now. And yeah, you’re gonna play this simple part, but it’s the glue to this tune, and it wouldn’t exist without you.’ I think that’s a really strong attribute to have, and he’s got it in droves. I appreciated that because when you go to make a record, it’s hard to set aside any past success you’ve had or, or past doubts you’ve had. He set that at ease, being like, ‘Dude, it doesn’t matter —we’re here right now to make this record. So let’s just do it and pretend like you’ve never done anything else in your life.’”

On their new collection, Watchhouse permeates preconceived limits of their artistry, exchanging some of the old-time fiddle traditions for percussive pop textures brought about by drummer Joe Westerlund, guitarist Josh Oliver, and bassist Clint Mullican. With intermittent contributions from Kaufman and Dave Nelson, the record chronicles their new chapter as parents to a nearly two-year-old daughter, Ruby, and their perspectives of a rapidly evolving world through this lens.

The opening track, “Wondrous Love” eases the listener into the album with Marlin’s warm vocal introduction. As listeners hoped, Frantz once again joins him in hypnotic harmony for the chorus. Watchhouse wades deeper into their new project with the ethereal psychedelia of “Better Way.” A lush soundscape sets the tone for expanded instrumentation heard throughout the album. Still rooted in their bewitching bluegrass marriage of mandolin and fiddle, the song veers further from their traditional form.

“Belly of The Beast” sees a return of the stripped-back acoustic sound, before “New Star” steps in, elevated by a touch of percussion to portray the sacrifices made in creating the connectivity of a family. Frantz’s vocals shine on “Upside Down” —a midway point and thematic centerpiece of the project. Driven by an electric guitar groove, the track continues to escalate to new sonic levels, capturing the life-altering experience of meeting your newborn child —referenced as Miss Blue Eyes. The experience surmounts with a poignant line: You’ve known me all your life / swear I’ve missed you all of mine / now you’re here I’ll always be right by your side.

The songs fall central to the parental perspective, and their hopes for a better world for their child. Watchhouse arrives here from various entrance points. “Coming Down From Green Mountain” is an intrinsically Appalachian instrumental reprise, leaving ample space for the listener. “Beautiful Flowers” is an existential exploration of the ‘butterfly effect’ — exhibiting the unintended consequences of industrialization.

“Nightbird” closes the album with a song about writer’s block. The song was born from a moment of thinking himself further and further into a black hole, after not writing a song for “a long time” —two months to be exact. He wrote the song to personify the creative block he was battling. The result, he says, is “a very open tune.”

“The meaning behind each line in the song changes for me with each listen,” says Marlin. “That’s what I like most about songwriting. For me, anyway, I don’t try to spell things out. I like to leave a lot of gaps. It’s not up to me to inform who’s listening what they should feel. I’m laying out some loose parameters for you to take and decide how you feel.”

The song, he feels, accomplishes that. “It totally described how I felt in that moment, feeling lost. But also like there is so much music around me, and wanting to tap into that magic and not lose it,” Marlin explains. “But in the process, I kind of found it. And I think that’s the beauty of a song.”

Marlin compares songwriting to “The Questing Beast” —a character from T.H. White’s The Once and Future King. He says, “It’s basically this mythical creature that you can’t catch, but you chase it in hopes of going on an adventure. To me, that’s what songwriting is. You never catch the thing you had your eye on, but you end up with a song. You have to start the journey first.” 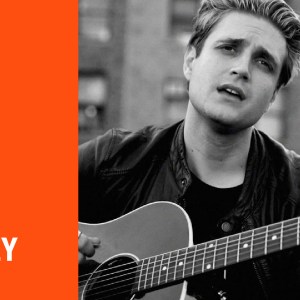