The title of the first album featuring Elvin Bishop and Charlie Musselwhite as co-leaders is called 100 Years of Blues. That’s a reference to the two musicians’ combined experience in the field—careers that have included collaborations with Tom Waits, Bonnie Raitt, the Paul Butterfield Blues Band, Mickey Thomas and B.B. King as well as a #3 pop single, Bishop’s “Fooled Around and Fell in Love.”

“We’ve been around since the Dead Sea was sick,” Bishop sings on the track, “so I guess we better keep on just doing what we do. Lord have mercy, it’s been a hundred years of blues.”

A more accurate title for the album might be 125 Years of Blues. Both men have been immersed in the genre since they were teenagers in the late ‘50s. They grew up in medium-sized cities far from the cultural centers of New York, Los Angeles and Chicago: Bishop in Tulsa and Musselwhite in Memphis. Both of them were fans of the early rockabilly artists like Elvis Presley and Jerry Lee Lewis, but when they heard the blues, they knew they had found the source of the river. And they made that discovery in the same place: WLAC-AM, blasting 50,000 watts out of Nashville.

“In those days, all the local stations would stop broadcasting at midnight,” Bishop remembers, “and the 50,000-watt stations would come in nice and clear. Back in those days there wasn’t much mixing of the races, but disc jockeys like John R. and Hoss Allen would play black music after midnight. And once we heard that, the cat was out of the bag.”

“I had heard street singers in Memphis,” Musselwhite adds, “but I didn’t know what to make of them. I had saved up my money from mowing lawns and had bought a clock radio I could play in my own room. When I heard John Lee Hooker sing ‘Hobo Blues’ and ‘Crawling Kingsnake’ on WLAC, it all made sense; it seemed so logical. The subject matter of women and drinking appealed to me, because that’s what I wanted to do.”

“I wasn’t supposed to be listening,” Bishop continued, “because I was just a kid. I had a set that was as much a piece of furniture as a radio. When I turned it on, all that static was crackling, the tubes were glowing orange, and Jimmy Reed’s harmonica came on and cut right through the static. I loved Elvis’s early stuff, but when I heard John Lee Hooker, I said, ‘Oh, this is where the good stuff in Elvis, Chuck Berry and Fats Domino comes from.’”

Bishop came north to attend the University of Chicago, and Musselwhite moved in search of better paying jobs. The latter got hired as a driver for a pest exterminator and soon explored every street in town. When he saw a poster outside Pepper’s on the South Side advertising a show by Muddy Waters, Musselwhite was thunderstruck. You mean you could hear that mythic voice from WLAC in person for two dollars?

Bishop made a similar discovery when the African-Americans working at the college cafeteria agreed to take the freshman college student to Pepper’s to see Waters fronting his great band with James Cotton and Otis Spann. Both Musselwhite and Bishop, much to their surprise, found themselves accepted by these black musicians a generation older.

“Because we weren’t Yankees,” Musselwhite explains, “we were different. We all talked like Southerners and ate the same food. The musicians would introduce us by saying, ‘They’re from down home.’ When I went to the North Side of Chicago, I couldn’t understand what the people there were saying.”

“You had to have common sense,” Bishop says. “You didn’t walk around the ghetto with a hundred-dollar bill hanging out of your pocket. But it wasn’t like it is today with all the hard drugs. It was more like a Southern city with a lot of black-owned businesses. The guys in the bands would tell us, ‘Things aren’t too cool among the races, but with musicians it’s different.’ And it was.”

It wasn’t just that they were Southerners; it was also that they were young and enthusiastic. The dozens of blues clubs all over the South Side and West Side of Chicago were full of black adults but very few young people were interested.

“All those guys were real flattered that we would seek them out, go to a rough club and hear them,” Musselwhite recalls. “I was a teenager and there was no one else my age there, black or white. I’d tell the black guys at the factory, ‘I’m going to hear Muddy Waters tonight,’ and they’d say, ‘Are you crazy? That’s old people’s music. You should listen to  the Supremes.’ I’d say, ‘Motown’s alright, but what I really like is the blues.’”

Bishop was impressed by a local guitarist named Little Smokey Smothers, who held court at the Blue Flame. The young Oklahoman asked if he could get some lessons, and Smothers invited him over to the house.

“He’d play a record,” Bishop remembers, “and I’d try to play the rhythm part. But I couldn’t get it. It was like that Bob Seger song: ‘working on mysteries without any clue.’ Smokey took me into the kitchen and lifted the lid on a pot of beans and ham hocks. I said, ‘That smells good; can I have some?’ He slammed down the lid and said, ‘You can have some when you learn that part.’

“But hanging out at his house was as much an education as learning those chords. The music was invented by these people, and to get in there and smell the food cooking and the black cosmetics, to learn the jokes, was as important as the rest of it.”

Musselwhite had been playing the harmonica since he was a kid (“Everyone had one,” he says. “They cost a buck, so they were a favorite Christmas stocking stuffer.”), but he didn’t know its potential until he got to Chicago and heard Junior Wells and James Cotton. A waitress at Pepper’s told Muddy Waters, “You should hear Charlie play harmonica.” Waters insisted the youngster get up on stage and show what he could do. He did well enough that some of the musicians hanging out at the club asked Musselwhite to play with them. Soon he was making money playing music and his life changed forever.

“When I got to town in 1960,” Bishop says, “the first guy I met was Paul Butterfield. He’d grown up in Hyde Park, the most integrated neighborhood in the city, near the University of Chicago. He was on the stoop, playing the blues on guitar and drinking a quart of beer. We fell right together. We’d go play acoustic guitars at parties, because we didn’t have amplifiers in those days.”

Once Butterfield switched to harmonica and hired Howlin’ Wolf’s rhythm section (bassist Jerome Arnold and drummer Sam Lay), the group attracted the attention of Elektra Records. Producer Paul Rothchild added guitarist Mike Bloomfield and keyboardist Mark Naftalin in the studio, and the quartet became a sextet. The debut album, 1965’s The Paul Butterfield Blues Band, got young white audiences interested in electrified blues and kicked off the blues explosion of the mid-‘60s. Call it “cultural appropriation,” if you will, but mentors like John Lee Hooker and Muddy Waters enjoyed the new attention and the fatter paychecks that resulted.

A year and a half later Musselwhite released his debut album, Stand Back, following the Butterfield formula: a harmonica-playing lead singer, an older black rhythm section (drummer Fred Below and bassist Bob Anderson) and a young, hot-shot, Jewish guitarist (Harvey Mandel). The record didn’t get much airplay in Chicago, but the underground radio stations in California played it a lot, and when someone offered Musselwhite a month of paid work on the West Coast, he decided to try it. He never came back.

“I looked around at all that blue sky, green trees and ocean,” he recalls, “and I decided to stay. They had these ballrooms and they paid. My first gig was at the Fillmore with Cream and Butterfield, August of ’67. Elvin was in Butter’s band.”

“I moved out there around the same time,” adds Bishop. “There was nothing to not like about California. The weather was beautiful; you didn’t have to worry about that ‘hawk,’ that Chicago wind that cuts right through you. I remember walking down Haight Street and seeing all these amazing people, like I was visiting the zoo. On the other hand, we were used to trying to keep up with really good musicians, but there wasn’t a high level of musicianship out there.”

Their education in the blues involved more than just singing and playing an instrument. It also included songwriting, and the grandmaster of Chicago blues songwriting was Willie Dixon. There was a Dixon song on 1965’s The Paul Butterfield Blues Band, and there’s another on 100 Years of Blues. Dixon had a knack for plucking phrases and musical motifs floating around in black culture and distilling them to their most concentrated form on songs such as “Spoonful,” “Wang Dang Doodle,” “Hoochie Coochie Man” and “I Just Want To Make Love to You.”

Bishop and Musselwhite follow that example in the songs they wrote for the new album. Whether they write about Donald Trump (“What the Hell?”), the loneliness of a traveler (“If I Should Have Bad Luck”) or the camaraderie of musicians (“Birds of a Feather”), they both turn the Dixon trick of boiling the message down to a short, memorable phrase—always back by a similarly unforgettable rhythmic riff. And they also echo Dixon in the way humor abounds in their songs—disproving the notion that the blues have to be dour.

“I think of ideas and jot them down,” says Musselwhite, explaining his songwriting technique, “and eventually I put the pieces together and see how they fit.”

“I wish I could do that,” counters Bishop, “but I’m not one of these guys who can put in a couple hours of day on songwriting and come up with something. I like to do something else, like putting manure in the garden, to distract myself and then something will hit me. If it’s a real good idea, you’ll remember it.

“I used to think that,” Musselwhite replies, “but I was wrong. I’d remember the feel of the song but not the notes.”

“Well, maybe,” Bishop says. “One thing about waiting for inspiration, though, is you get songs that fit you, instead of what the record company wants right away.”

“But sometimes that’s when you come up the best stuff,” Musselwhite responds, “when the heat is on.” 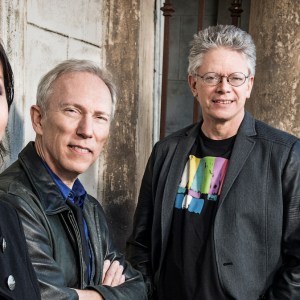