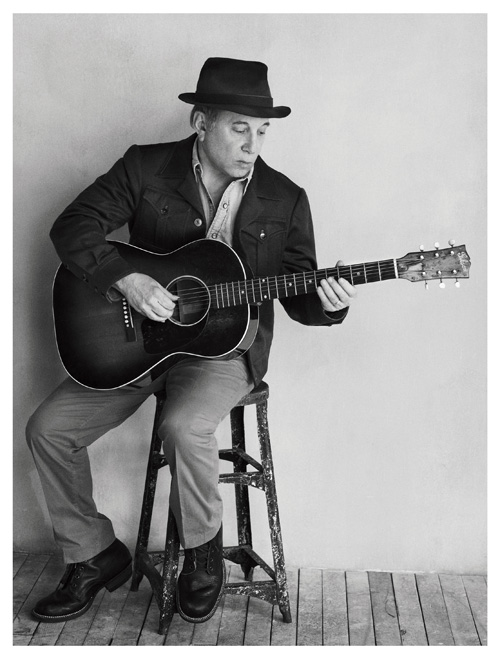 Paul Simon hears voices. Or, more specifically, one voice. It’s the voice that gave him the phrase “so beautiful or so what” a few years before it became the title song of his most recent album. It’s the voice that gave him other phrases now deeply woven into the fabric of our culture, such as “Sound Of Silence,” “Still Crazy After All These Years,” “Fifty Ways To Leave Your Lover,” and “Bridge Over Troubled Water.” None of these were contrived; all were ideas that simply arrived, sometimes when he was at his guitar, other times when he wasn’t. But, like any savvy songwriter, he knows it’s a good idea to listen when that voice speaks. And maybe jot it down.

Years ago, when I first interviewed him, Simon attempted to explain this mysterious process of listening. These days, he’s quicker to embrace the mystery, and leave the question of how his songs get written unanswered. (Will we all be received in Graceland? And just what was it that the mama saw?)

“Much of songwriting is simply a mystery,” he says from a Beverly Hills hotel room the morning after three sold-out shows in Hollywood. But what isn’t a mystery is that Paul Simon is an ongoing creative phenomenon, an American treasure as significant to the art of songwriting as Cole Porter or Irving Berlin was in their day, a songwriter who continues to break new ground in an art form that has been profoundly impacted by his work. Unlike many of his peers who seem creatively disengaged, Simon has entered his 70th year as exultant about songwriting and record-making as ever.

Rather than traveling around the globe to stir exotic sounds into the mix, this time around, on So Beautiful Or So What, he’s traveled into the past.  “Love Is Eternal Sacred Light” boasts a great locomotive-charged harmonica exhortation by none other than Sonny Terry, sampled from his 1938 “Train Whistle Blues,” while “Getting Ready For Christmas Day” is woven lovingly around samples of a 1941 sermon delivered with fire and brimstone by the Reverend J.M. Gates and congregation. Rather than ignore the potential of digital innovations such as loops and sample, he embraces them.

Today, he’s concerned about a sore throat, and drinking lots of water and herbal tea so as to be in good voice for tonight’s show near San Diego. “I had some coffee yesterday,” he says, “and that might be the problem.” A friend worries aloud that Donald Trump is making waves, which Simon dismisses like a bad joke: “Nobody’s listening.”

He seems happy, relaxed, and very much in love with his wife of many years, Edie Brickell, and their children. It’s a sense of spiritual harmony that permeates all of So Beautiful Or So What, and is crystallized in the album’s stirring centerpiece, “Love And Hard Times”: “Thank God I found you in time. Thank God I found you …”

In 1992 you told me you were more interested in what you discover than what you invent. Is that still the case?

Yeah. It’s like you’re wandering down a path and you don’t know what the destination is. Somewhere, toward the end, you can sort of see what the destination is and you can understand what the journey is about. At which point, if I want, I can go alter some of the things that occurred to set it up. But usually I don’t. It usually just goes along as a story that I’m telling, and I’m a listener, and at a certain point I say, “Oh! That’s what it’s about.”

But that part of the process, I really can’t explain it. I don’t really know why an idea comes to me. But all of a sudden, an idea comes and from experience I can intuit what something means when an interesting line pops up. Or I can intuit what an interesting choice might be. And I can try a couple of different choices, and see which one feels right, and then continue the song to see where it goes.

Do you give a lot of thought to the meaning?

No. The only thought that I give to it is: “Is that something that I really believe?” It doesn’t have to be insightful or anything. It just has to be not a lie. I can’t say, “I’m setting out to write a really deep, philosophical song.” I would never say that. I have no idea.