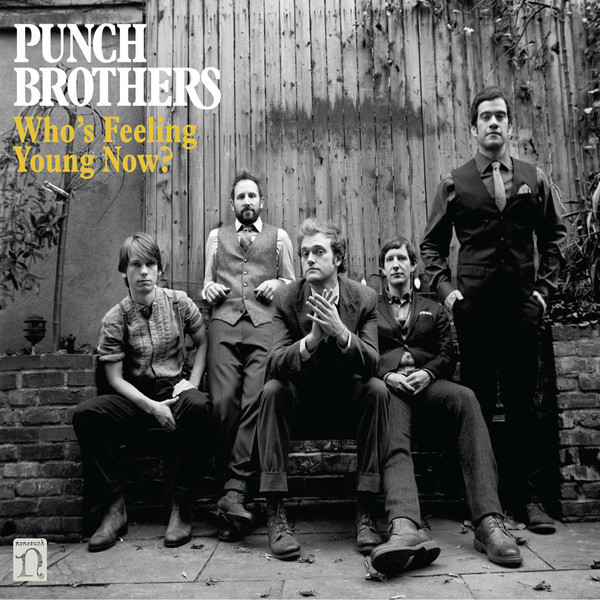 Chris Thile’s virtuosity as a singer and a mandolin player should surprise no one by now. Nor should his ambition and adventurous spirit. Since leaving the smoother, poppier confines of Nickel Creek in 2007, he has been prolific, almost restless, releasing solo albums and collaborations that stretched his limits as a singer, songwriter, and picker. In 2011, Thile collaborated with bluegrass fiddler Stuart Duncan, bassist Edgar Meyer, and classical legend Yo-Yo Ma on The Goat Rodeo Sessions and with guitarist Michael Daves on the traditional bluegrass album Sleep With One Eye Open.

In Punch Brothers, Thile has the perfect musical unit for exploration, dexterous musically and stylistically. What it established on 2010’s Antifogmatic the band takes even further on Who’s Feeling Young Now? The musical leaps Punch Brothers takes are invigorating, sometimes breathtaking.

One could imagine a bluegrass rendition of Radiohead’s more popular tunes like “Fake Plastic Trees” or even “Karma Police.” On Young, we get an ornate instrumental “Kid A” with all acoustic instruments. No drums, but the song loses none of the original’s pulse thanks to some muted picking. The other cover on the album sounds most like traditional, Celtic-influenced bluegrass. It’s a hot instrumental called “Flippen,” courtesy of the Swedish folk outfit Vasen.

It’s not that Punch Brothers leaves that bluegrass sound behind. Often the rhythms and melodies start with familiar bluegrass structures. And the instrumentation is still fairly standard – mandolin, banjo, guitar, bass, and fiddle. But the execution is anything but standard, and the arrangements and Thile’s vocals twist and turn in unexpected directions. It’s disorienting and thrilling.

The album opener, “Movement And Location,” sounds like it could be a Coldplay cover with its static mando, guitar, and banjo providing the rhythm and Paul Kowert’s bass chords providing a counterpoint to the melody. At times, you get the mando with a delay/echo effect just off the beat. Thile’s vocals and Gabe Witcher’s fiddle swoop and soar over the whole thing, Thile reaching high into falsetto. As far from a bluegrass sound as this might be, there are still some traditional roles being played here, with the mando, guitar, and banjo as rhythm instruments and fiddle and voice providing the melody.

That’s followed by “This Girl,” a cute, happy-go-lucky tune where the narrator prays for the object of his affection to notice him. The bubbly nature of the lyrics is reinforced by the mando and Noam Pikelny’s banjo playing octaves, mimicking steel drums. And if you’ve seen the band live, or caught them on one of T. Bone Burnett’s Speaking Clock Revue shows, you know everyone can sing, and the harmonies sound beautiful here. Everyone is also in fine voice on the next track, “No Concern Of Yours,” which vacillates between a harder-edged bluegrass sound (think “Rye Whiskey” from Antifogmatic) and a more lilting, legato melody. This might be the Punch Brothers version of loudquietloud.

The title track is yet another stylistic shift, this time a permutation of reggae and rock, not unlike Speaking Clock host Elvis Costello, especially at the bridge/chorus section with the lyrics, “They try to tell us and at times we try to listen/But we can’t hear a thing when all we think about are all the things we think we might be missing.” Guitarist Chris Eldridge doesn’t get to step out much, but he’s often the sonic center of the music, as he is here.

The most lyrically clever song is the glissed-out Tin Pan Alley “Patchwork Girlfriend.” “I run my fingers through her blackish, blondish hair/I look into her brown-blue eyes and touch her skin, so dark and pale,” sings Thile. Later, he promises her, “I won’t mess around with other girls unless they’re her.” And Josh Ritter fans take note, he collaborated on the lyrics on the bluesy “Hundred Dollars” and the dramatic “New York City.”

Perhaps the best part of Young is that it pulls off all of these twists and turns while remaining tuneful and entertaining. What more can you ask of an album?