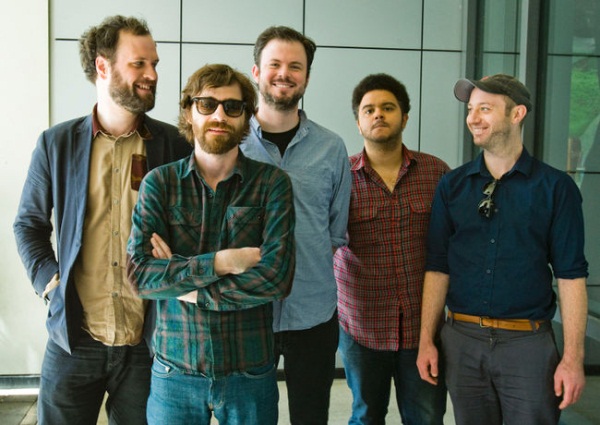 A rural Nova Scotia atmosphere and cold, winter evenings proved to be the perfect instigation for Tim d’Eon, Loel Campbell, Paul Murphy, Jon Samuel and Mike Bigelow to pick up instruments and find out that music was their lifeblood. The five make up the alternative rock group, Wintersleep, which, while known in Canada and Europe, is just beginning to gain momentum in the United States. Wintersleep appeared on David Letterman last year and has just recently released their fifth album, Hello Hum.

The Wall Street Journal declared that their music “broods, bellows and stalks the listener with soaring vocals, punching drums and waves of guitars.” An apt description. Their music resonates and seems to flow right into your spirit, evokes images that take you to another place altogether, with a style that seeps into your memory. Once you hear this band’s songs, you won’t forget them. Promise.

Currently on tour, singer/guitarist Paul Murphy and drummer Loel Campbell took a moment  to talk about their music, what inspires them and what they’ve learned from their creative journey.

Where are you each from? How and why did you become a musician?

Loel: I’m from Nova Scotia. I grew up in a small fishing town called Stellarton, and by the water in Black Point in the summers. I started playing guitar when I was 11 or so and picked up the drums at 14. The real reason I started drumming in bands was out of necessity. In one of the first bands I played guitar in, we had a pretty awful drummer so I had to re-do his parts on our demo. I didn’t really know how to play, but it was at least in the ball park of drumming, unlike the drummer we had at the time.

Paul: I sing and play guitar. I grew up in the same small fishing town as Tim, in Yarmouth, Nova Scotia. It’s home of hockey bruiser Jody Shelley and I think the man who invented the propeller. That is the lore around town at least. One thing that is for sure is that it is a coastal, seaside town. Really scenic and beautiful, but not a whole heck of a lot to do. My brother Jon brought a guitar home one day and I fell in love with how it sounded, and the idea that you can create your own fun, and in some way externalize whatever energy is in you, then bring that to friends in a jam space to work on it further. It was amazing.

Loel: Well, guitar-based, with some interesting drumming, hopefully, and some additional fun stuff. Whatever the mood calls for. Things usually start on guitar, or something extremely simple on piano.

Paul: “Awesome.” That’s a joke. I don’t really know how to describe it. Feels like a body part.

You have a unique energy to your music. Where does this come from?

Loel: Our genuine approach to it. Most of us are self-taught musicians so it all came from muscle originally, and it’s been kind of refined from that. The basis is really the energy. I think it’s from the ear-playing and not reading or having too much theory behind writing. If someone has a cool part and runup along side of it in a way that is perhaps a bit unconventional, but still musical, it’s a bit more human that way. Hard to break it down. Let’s leave it to wonder as well.

Paul: We all try to bring good vibes into the rehearsal space and sort of feel out together where a song should go energy-wise. A lot of different types of energy though, song to song.

How has your environment in Canada and family heritage shaped your music?

Loel: Hugely. I started playing basically out of not fitting into, or being uninterested in, sporting clicks in school. My group of friends bonded over bands and learning to play guitar in our small town. It kept us focused on doing something productive and creative. All of my friends mostly played instruments and we were all supportive towards each other. I was a pretty chubby kid, too. I actually convinced my parents into letting me bring a drum kit into the house by explaining that it would be good exercise. Turns out it is!

Paul: Growing up in a small community like Yarmouth, we realized pretty quickly that if we wanted to play music we needed to work really hard, and that we’d have to do it ourselves. Not a lot of avenues there for someone playing music or trying to set up shows. Also, being from a smaller rural area, it was sort of easy to focus on writing music or jamming with people. It was basically what you looked forward to after school and on the weekends as something to do, and a way to hang out with friends.

What music and musicians inspired you growing up?

Loel: I was really into Nirvana and any metal that I got my hands on: Sepultura, Slayer, Pantera. That kind of energy was inspiring at the time. Brian Borcherdt from Holy Fuck had a band very early on that would play in my town and I became friends with him. That’s actually how I met Paul and Tim.

Tell me about your creative process. Who does what? How do you shape a new song, a new album?

Loel: Depends on the song. Everyone writes a lot of ideas on guitar, some things are more fleshed out than others. We just kind of bring up ideas in the jam space or send them around through email to each other and see what people are digging on.

Paul: We all jam it in hopes of happy accidents, or other things that can come up. Usually the best ones are the ones that surprise you mid-way through and turn in a slightly different direction than you might expect . We had a bunch of material for Hello Hum, so we basically demoed 18 tunes, and then picked the 12 that fit together the best to our ears and minds.

What do you try to evoke in a listener when you write a song?

Loel: I don’t know if there is an intention behind what we’re doing. We just do it for the joy of the act itself, most of all. Themes and motifs sort of pop up along the way and you can at some point sort of connect the dots and make informed decisions about the types of songs you will pursue to make the album rounder and fuller. But initially and most importantly, it is just about creating something together because we love writing songs together.

What myth do aspiring bands and singer-songwriters have that you would bust?

Paul: “It just takes writing a good song.” There are a lot of things that go into getting a song into the world. It requires a lot of touring and a lot of hard work, not sitting on your bed playing songs.

Loel: I think fear can inhibit a creative experience. Not being confident enough to push through with something. You can’t let it get in your way. You have to have faith in yourself.

Paul: The most challenging aspect for us after five albums is keeping it new, but still creating something that speaks to you. Challenging in a good way. Touring is also challenging, though it’s fun, too. You have to tour quite a lot and be able to keep writing, while finding the balance and the space to keep ideas flowing. Taking the necessary time off so you don’t get drained can be challenging, too.

What is the most frightening aspect of having reached the level of success that you currently have?

Loel: Maintaining it. Getting better. Realizing you’re only as good as the last thing you’ve done. It’s turned into being able to make records consistently so that means working on new stuff all of the time, which is still the most fun thing to do, ever. It’s not like a mountain you can climb to the top of, though, you’re always walking up the hill.

Do you think singers, songwriters and bands should take more risks than they do in being unique and authentic to their own voices?

Loel: I think you should just be true to yourself and how you comfortably achieve your process. That’s when some magic will happen. It sounds cheesy, but you should just be yourself. You might not find that out for a real long time musically, who you are, that is. You likely will, though. You’ll be through enough and have things to share.

Paul: Generally, yes. I think people can sense inauthentic things. But lots of people make a lot of money singing pretty crappy inauthentic songs, so it depends on what you want to do with your music, and what it represents for you, and maybe what you’d like it to do. My favorite music is stuff that is unique in some way. It could be a interesting vocal style, or a cool way of writing lyrics, or the unique “sound” that a group of players make together.

What is the key to a successful collaboration?

Loel: That you want to collaborate in the first place.

Paul: Keeping your mind open to different ideas and to keep excited about everything that comes to the table, and really try your best all the time. Moving on from certain things and starting anew, knowing the right time to do that, is important, too. And, of course, communication between everyone, and really taking time off for a bit is good, too.

Are you involved in any other creative ambitions?

Loel: Lots and lots of ideas. No plans on halting anytime soon.

Paul: Not at this time. Touring this record will take up the next year or so at least. The creativity will go into sequencing sets and performing to as many people as possible. It’s gonna be fun. 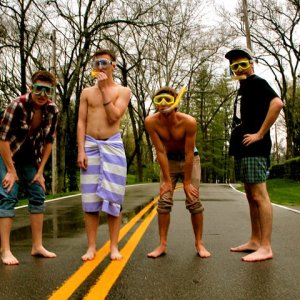