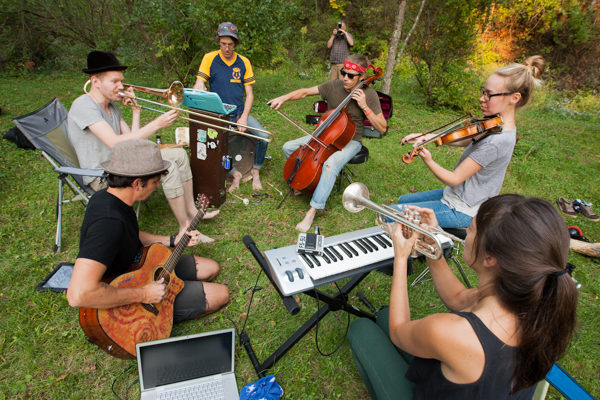 Cloud Cult’s ringleader Craig Minowa opens the gaping door of his three-car garage in rural Wisconsin. High bluffs of an inactive rock quarry rise in the distance. Trees sprout from the clifftops. Hawks and eagles swoop from the sky. The night before, a wolf standing on the ridgeline watched Cloud Cult’s six members rehearse around a campfire for the recording of their latest album, Love. Even with its scent of gasoline and shelves lined with paint cans, Minowa’s garage serves as the recording studio for the band’s own label, Earthology Records. But the quarry that Minowa’s home rests in provides more than a unique studio view.

PHOTO GALLERY: A DAY IN THE LIFE OF CLOUD CULT

As the sun sets over the bluffs, Cloud Cult crowd around microphones to belt out lyrics to new songs like “Complicated Creation”: “I called up the moon for a little consultation,” the band yowls into the distance, letting their vocals bounce back off of the quarry walls, creating a “deep reverb,” Minowa says. “The birds were pretty wild that day, too, so you can hear them on some of the tracks.” Considering the studio’s idyllic setting, the band’s keyboardist and trumpet player, Sarah Elhardt Perbix, says, “It really puts things in perspective rather than a shitty box of a room with no windows in the city.”

Love, set for release on March 5, is a milestone for Minowa and Cloud Cult: including 1995’s The Shade Project, it’s Minowa’s tenth album. “The biggest reason that I’m in music is for self-exploration,” he says. “The writing process is really meditative for me, so before this record, I went back to all of the other albums and looked at their outcomes to see the answers I’d found in that exploration. With each record, there was this wake-up call to be present right here now and put out as much love as I can. So on Love, every song is trying to cut through my personal crap.”

Cloud Cult’s ragtag aesthetic and purposeful drive have been apparent throughout their long career: they incorporate live painters onstage at their concerts; they’ve cultivated the sun’s energy with solar panels on tour vans; and now they use the earth itself to create studio effects. But since their last album, 2010’s Light Chasers, recent developments have led Minowa to also explore different ways to make sharper-sounding records without losing the band’s original energy. “I’m less patient with having buzz from pick-ups or a click-clacking sound,” Minowa says by phone from Earthology’s home in Viroqua, WI. “So I’ve been switching some of my equipment over the last couple of years.” He traces this evolution back to his recent stint scoring music for shows on the National Geographic Channel—“Old elements from Cloud Cult albums don’t necessarily work for scoring music,” he says—and an important band decision made around the bonfire.

As Cloud Cult entered the final stages of recording Love, their tour manager and audio engineer Jeff Johnson pushed the importance of audio clarity in today’s digital soundscape. “I’ve been against that for a long time and preferred to have an authentic energy,” Minowa says. “But Jeff played a big part in convincing us that we could record in a clean way without losing all of that energy.” Debating around the bonfire whether to take a huge leap and abandon the Earthology Records sanctuary for a more professional studio, the band opted to stay put. “But we’d upgrade equipment on a modest level,” Minowa says.

The bandleader still records and plays live with what he calls a “Gretsch rip-off,” a hollow-body Yamaha, but Cloud Cult has switched its recording software from ProTools to Ableton Live. It’s an all-in-one tool that can be used for arranging, composing, mastering, mixing, and recording music. The band also takes it onstage to play samples, but Minowa says he uses another software package to emulate the instruments during his writing sessions.

“Our writing process is very different from most other bands in that we don’t get together and jam,” Minowa says. Cloud Cult’s members are spread throughout the Midwest (Minowa and his wife Connie are in Wisconsin while the other band members live in Minneapolis and Chicago), so Minowa writes most of the band’s material at home alone and then uses EastWest software to emulate everything from guitars, drums and strings to hear his full compositions before bringing the full band to Wisconsin. “In the past, I’ve written and recorded everything and exported parts as sheet music to send to the band,” Minowa says. “But for this album, it worked better to send them recordings so that they could learn them by ear.” 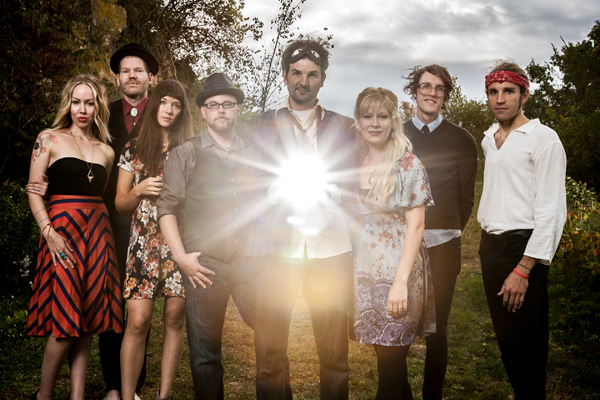 Minowa continues to experiment with artificial sounds on record as well. The track “It’s Your Decision” includes a riff that sounds like a metallic didgeridoo wired through a wah-wah pedal. Minowa says, “It’s a sculptural sound,” that he spent a day creating with Reaktor, a software package that allows musicians to build instruments when nobody is available to play them. “I got tuned into it a few years back when reading about how Trent Reznor would build sounds.”

He’s also experimenting with new ways to power the Earthology Records studio. At Minowa’s previous home studio in Hinckley, MN, he used geothermal energy to power the band’s equipment. He says that he’s unable to go that route today with his home nestled in a defunct rock quarry, so this spring he and Connie (one of the band’s onstage painters) plan to experiment with hydroelectric power from a nearby spring. “You can set up little water turbines that feed off of the springs,” he says, adding that they already use solar panels to heat the water that runs through the studio’s heated floors.

Serious recording at Earthology happens somewhat rarely, however, so Minowa has decided against building a permanent room to record drums for the moment. For Love, the band’s drummer Arlen Peiffer recorded at the Hideaway Studio in Minneapolis. It may have been more professional than Earthology, but Peiffer still brought along the band’s scruffy aesthetic by utilizing nearly anything he could bang on in the Hideaway: he used one of the studio’s snares (a C&C Custom) and covered it in tape “so it sounded super dead”; he also found some broken 17” crash cymbals that he used for hi-hats on the song “Sleepwalker.” “They sounded super trashy and perfect for that track,” he says.

Minowa says that the songwriting process has also changed since moving to Wisconsin. Earthology’s Minnesota studio was in the basement of the Minowas’ home. “It was pretty dank and uninspiring,” he says. “Back then, I’d do most of my writing on the deck. It was peaceful. I’d be inspired by the stars and the aurora borealis. Now the inspiration is coming from the land.” He also says that he paid more attention to his fanbase on this album. “We get lots of emails from fans about the crap they’ve been forced to go through in life,” he says. “Whether it’s overcoming cancer or feeling suicidal, there are lots of emotional stories.”

As the album’s title implies, “love” is the record’s biggest theme, and Minowa carefully considered the greater implications of using that word. “Even something as simple as naming it Love,” he says, the word is “going to be printed in newspaper reviews and on posters in venues. It’s going to have a psychological effect on people seeing it. I want people to walk away and be reminded of love.”

Minowa is well aware that this may come off as too melodramatic for certain critics. Some of whom haven’t been so kind to Cloud Cult since the band garnered rave reviews for 2005’s Advice From the Happy Hippopotamus. The lack of blog-buzz adulation rankles Minowa, to the point that he had a song ready to include on Love called “Song to the Music Critics” where he unleashed “some personal venting.” But he scrapped the track after realizing it didn’t fit in with the album’s theme or with who he is today.

“I don’t want to play to any of the critics,” he says. “I expect to be ripped apart by Pitchfork on this one. I used to care more about that in the past. But I’m coming up on 40 and now I want the product to be as positively intentioned as possible. I want it to be useful for fans and ourselves.” 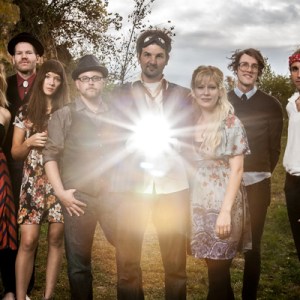 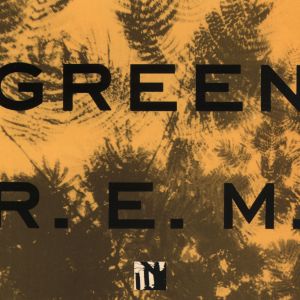