There has never been any doubt about Eric Clapton’s genuine love of the blues. As far back as his short stint in the Yardbirds, a group he left because they were skewing too pop, he has flown his blues colors proudly. They informed, if not quite defined, his work with John Mayall, Cream, Blind Faith, Derek and the Dominos, and even on solo projects where he often veered into far more commercial territory.

So it came as little surprise when he finally jumped into those rootsy waters with both feet on From the Cradle (1994). The subsequent tour remains the lone trek where he stuck strictly to songs written and played by the bluesmen he admired, dismissing any originals.

Thankfully, two of those dates were recorded (audio and video) for a documentary executive produced by Martin Scorsese (who also conducted the Clapton interview segments that appear intermittently throughout the film) and shown on PBS only once in 1995. Why it has languished unseen or heard for the subsequent 28 years is not explained in the skimpy liner notes to either the DVD or CD editions. But since the music, which was already old when Clapton recorded his versions of these classics, never ages, the belated appearance of this release is a long-awaited delight.

You don’t have to be a blues lover to appreciate Clapton’s palpable dedication to the genre on the hour and 45-minute video or the accompanying 75-minute single CD (available separately). He’s backed by a sturdy five-piece (a trio of horns also appears sporadically) keeping the sound raw and real. But Clapton is clearly fired up as he digs into the tunes of all three Kings (Freddie, Albert, and BB), plus Howlin’ Wolf, Little Walter, T-Bone Walker, and other legends. Some like BB, Buddy Guy, and Jimmy Rodgers appear on screen in short segments to provide historical perspective and commentary. Clapton also discusses what he loves about each blues legend and goes into detail with specifics about their playing, which provides fascinating perspective, even if it chops up the show’s footage.

The video eschews the fast-cut “MTV styled” caffeinated approach to linger on Clapton’s fretboard and fingers. There are mercifully few reaction shots of the audience at the relatively intimate Fillmore West. The camera instead takes us on stage as Clapton growls and howls both vocally and through his guitar.

The track list replicates many selections on From the Cradle, adds items from Clapton’s existing catalog like “Have You Ever Loved a Woman” and “Crossroads” and swaps out others, specifically removing the over-recorded “Hoochie Coochie Man” for Wolf’s tougher “Forty Four.” While most of the set is plugged in and loud, a middle acoustic section displays the guitarist in a more stripped-down format, specifically on Robert Johnson’s “Malted Milk Blues” and the traditional “Motherless Child.”

Clapton, dressed informally in a t-shirt and baggy pants, both looking like he picked them up earlier that day from the local Goodwill, tears into this material with searing intensity. His playing exhibits a determination to present the music with the seriousness that only someone who has bottled up his enthusiasm for years until finally unleashing it on stage with this fine band can provide.

Since the video was shot for television, it’s not in widescreen format, yet that’s of little concern with a performance this fiery and energized. Clapton has quite a history of memorable moments; still, this collection of highlights from two shows certainly rates as one of his most unforgettable and impressive.

Combined with the interviews, it’s a mini class in the history of the blues and its most important players with Clapton as one of the genre’s most talented, highest-profile, and vocal proponents. 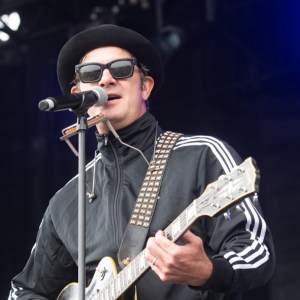