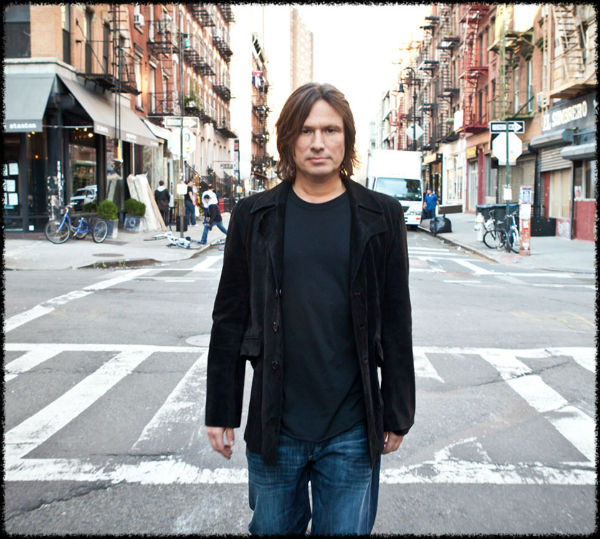 Who’s the MVP of Aerosmith? It might just be Russ Irwin, the band’s keyboardist of 15 years, who, as their go-to harmony vocalist, has to sing higher than Steven Tyler on a nightly basis — no easy feat — while pumping out a steady dose of tasty fills.

Some of that Aerosmith magic wore off on his solo album, Get Me Home, which alternates Billy Joel-style piano ballads with high energy, funk-infused rockers Stevie Wonder would approve of. Tyler’s a big fan, and lends his trademark vocals to two tracks. We spoke with Irwin on the eve of the Boston Band’s tour-ending show in Nashville about Get Me Home, landing his day job and more.

Check out the live video of Irwin’s “Manhattan” below, and read his recent guest blog here.

Do you remember your audition for Aerosmith?

It was in Boston at Joey Kramer’s house. I auditioned with three or four other guys; I was the first one to audition and Steven and I just started singing together and it was like instant magic. It was really cool. We sang great together. I’d never had that kind of experience with anyone before – to sing so well with them – we were really in tune with each other. He called me the next day and was like ‘dude, you got the gig. Can you come to London next week?’

You were a solo artist before that. Did you back up other people during that time?

I started doing that as soon as I moved to New York. I played in a lot of different bands, going from gig to gig and rehearsal to rehearsal. Mainly I played keyboards, I sang some, and eventually I played guitar too. So yeah, multi-instrumentalist, that was my thing.

Steven Tyler’s voice still sounds great. Do you think it’s changed at all? Does he still have all of his range?

Yeah he does, totally. He’s an incredible singer. I didn’t fully know how great of a singer he was until I was in the room with him. I mean I liked Aerosmith a lot, but it wasn’t until I experienced them one on one that I saw how really talented he was and how great they were as well. They’re really unique. It’s such a great live show, the energy is really off the charts.

Do you have a favorite Aerosmith song?

I don’t know if I have a favorite, but I guess, for me, I would say “Dream On.” It’s one of the first songs I ever learned, when I was like 9. That kind of has a special place for me.

How does that work? Does Tyler play piano and you play keyboards on that one?

We switch. He’ll start it and I’ll finish it; halfway through I’ll pick it up. That’s how we do it right now. But over the years I usually play it. I think this is the first tour where he’s actually playing it consistently. There’s been a couple where he’s wanted to play it, but usually he doesn’t.

That must be some wish fulfillment. That must feel good.

It’s a great moment. That song is such a part of rock history, for me at least, and I think for a lot of people.

What about the other songs? Are you actively playing on each song during the set?

I think there’s probably only one or two songs I don’t play on during the set. Steven really likes me to stretch out on the piano. He really likes me to play blues piano stuff. He’s always wanting me to play more, more, more. He’s like a big Leon Russell fan. He got me to listen to Leon Russell and got me to pick up on what he did and try and bring that to the table.

When I started playing I was listen to Billy Joel and Elton John; and then later Stevie Wonder and stuff. It wasn’t until I was in Aerosmith that I started really going further back and started listening to Memphis Slim and those kind of guys, the really rootsy blues players. Cause that’s really where I think Aerosmith comes from, they really think of themselves as a blues band.

Tell us about your solo album. What was the impetus for putting that out?

It was sort of a happy accident. I’d just finished a long Aerosmith tour. I was hanging out with this guy Kenny Seigal – he’s a producer and a friend of mine – and he was like, “Dude, when are you gonna make a new record? Why don’t you come up to my studio and lets do it.” And I thought y’know what? Maybe I will. I just wanted to record some stuff and have a good time that was what I really wanted to do; just go up there with some musicians that I really liked and just… I wasn’t even planning on making a record, I figured I’d just go to the studio in upstate New York and just see what happens. Next thing I knew it was coming out great so I kept going and I kept writing and the next thing we knew I had a record.

So all those songs were written pretty recently?

Everything was written during that time. We recorded a couple of songs that I’d written years before but I ended up not using them because they didn’t seem as fresh; there was something about that energy that was happening while we were there. I was writing on the spot and doing different takes. It just had an energy.

Let’s talk about “Manhattan.” Did you have the melody first?

Actually the lyric came first. I was flying to the first recording sessions to make the album – which I didn’t know was going to be an album yet –and I was pulling onto the tarmac and trying to think of some songs for the sessions, because we didn’t really have that many, so I thought, “Wow, it’d be cool to write a song about coming home.” Then I realized that there was never a song written about Manhattan really that I knew of, and then I started writing “Take the Red Eye from LA to JFK” so I had that framework. And this bluesy, rag timey riff… I was thinking Woody Allen for some reason, something really old school. I just thought that would be really interesting, cause it has that old school New York vibe, smoky, that sort of thing. And I thought the two [melody and lryics] worked really well together.

Did Steven Tyler work on the album with you towards the end or the beginning?

Towards the end, yeah. I went to his house – he has a house right near me actually in L.A. – and I was in his car, and he wanted to play me the mixes for the new Aerosmith record. He was playing me the roughs and the mixes and stuff, and I was like “Cool, man, I’ll play you the roughs from my record.” He heard a couple of tunes and he was like, “I wanna sing on that one.” So he wanted to be a part of it, and I thought ‘wow, that’s pretty cool’.

And you wrote on the new Aerosmith record, Music From Another Dimension. Is that a first for you?

Yeah, I wrote “What Could Have Been Love” the song that was just the last single. That was a new experience too. Steven and I had tried writing a couple of things before, but they hadn’t made a record in a really long time so they weren’t in that frame of mind of writing and stuff. So when this record came along we finally got around to it. There it is, it became a single. It was really cool.

I wrote it originally with their producer, Marti Frederiksen, who lives here actually now. And then we brought it to Steven who really fell in love with what we had and then he finished it. It was a long process, we started writing it like eight years ago.

Oh yeah. I hear it’s like top 5 or something.