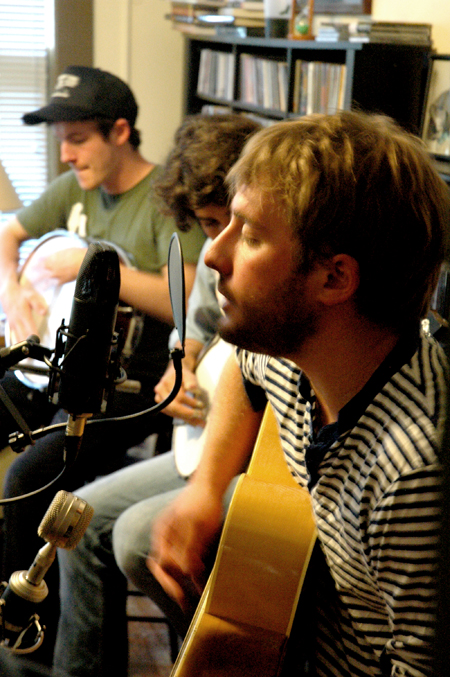 We were psyched to have Michigan indie upstarts Frontier Ruckus join us for a session here at the American Songwriter office. The songs they played for us, off their brilliant, haunting new album, Deadmalls and Nightfalls, sound more like the product of several long days in the studio, rather than an off-the-cuff live performance. Take a listen and see what we mean.

Frontier Ruckus were recorded by Kyle Byrd for American Songwriter.

You just played Bonnaroo for the first time. How did it feel to be up there on stage?

Matthew Millia (lead singer): Hot and sweaty. That was out first experience with a festival of that magnitude, so it was very overwhelming and very over-stimulating but in the best way. It was really hot and muggy, but it was a great time.

How did you guys form? I know you were in high school together and the band lasted through college.

David W. Jones (banjo and dobro): We actually met at the all-girls Catholic school that was right next door to the boys Catholic school. They were separated by a moat, of course, to prevent those boys from getting over to the girls school. We took drama class together, which is kind of dorky to admit. It was one of two classes you could take that were offered at the girl’s school. And that’s where we met. Matt went to Michigan State University, and I went to the University of Michigan, and we met the rest of the guys at MSU.

How did you get signed to Ramseur Records?

Matthew: Another kind of accidental thing; Samantha Crain, who is on Ramseur Records, is a great friend of ours now, and a great musician, just happened upon us in Grand Rapids, Michigan. We were playing on the radio there and she happened to be living there briefly between tours. She was accidentally at the radio station and heard us play. She didn’t introduce herself to me, but really liked it and came to our show that night and I didn’t even meet her then, but she was just kind of lurking in the shadows, discovering us or something. She told Dolph [Ramseur] about us and he called me, like two days later and it just happened like that. It was very coincidental, but we were very grateful for such coincidence.

Zach, how long have you been playing the saw?

Zach Nichols (saw, horns, melodica): About four years. I started the week before I met these guys. Matt had an ad somewhere for a saw player and a melodica player and I was like, “Hey, I just bought those two instruments,” so I practiced, maybe for half an hour, met these guys.

And you guys actually had the concept in mind that you wanted a saw player?

Matthew: Yeah. One of our favorite bands, Neutral Milk Hotel, had it, and we’ve heard it here and there. The same with melodica, it was just that eerie sound in the back of The Band song “The Night They Drove Old Dixie Down,” and I was like “what is that sound?” It was this little texture you hear, that you don’t hear all the time so it really strikes you, and then you look at the liner notes and figure it out, and you’re like, “now I need a melodica player.”

Is the latest record a concept record?

Matthew: Not deliberately, but whenever I have a catalogue of songs that have come in a kind of bundle, they’re conceptually bound just by a time and a place. So anything I write in a certain time — and the more we tour, the more that writing is contingent upon a certain time spent at home, so I can kind of pin exactly what was written in what period, and those things are going to be very disparate from other periods, so it wasn’t a lofty ambition to tie everything together, just works that way, I guess, for me, at least.

This is a very difficult question to answer, I’m not sure how to phrase it, but how do you feel music works on your subconscious?

Matthew: In a very therapeutic way, especially the writing and creation of music is the most powerful tool I have to be a sane human being.

Ryan Etzcorn (drums): I think the only thing that keeps us sane while we’re on the road is playing the actual show.

Matthew: Playing the show, we’re thinking about new songs, and just the joyous activity of creation, just the potential of what you could do. I’ll just have thoughts for a song, then I’ll play a riff for the band and the whole rest of the day will just be talking about the potentiality of what we could do with it, so that’s a very healthy place to live, considering the alternatives.

How do you write the lyrics? Do you spend a lot of time with them or do they come out more stream-of-consciousness?

Matthew: I’m always writing lyrics separately. It’s not just stream of consciousness, I’m not just sitting there and writing page after page. I’m always open to collecting images and rhymes, scenes or situations. There are just certain aspects in my life or certain little things that have happened that I’m always trying to think about how I can capture. I have a To Do list, like a back order of priorities, of things I would like to write about, but have never really been able to pin down. I guess my writing is just slowly checking those things off my list, feeling at ease with that thing that happened, so it doesn’t subconsciously or psychologically haunt me for the rest of my life.

You were a lit major in school. Who are some of your favorite authors?

Matthew: For poetry, Walt Whitman, and that’s where I get a lot of tendencies toward the bodily, lustful expression of life. A lot of imagists, that really just obsessed by the image and using physicality to express the internal emotions of life and memory, and the same with Walt Whitman, so I’m really obsessed with the physical world and how that can serve as a metaphor for everything else, internally. That’s why I write about place and buildings, bodies a lot, and fixtures of the locality I’ve come from.

How did you guys come up with the name?

Matthew: That was a long time ago. We don’t know how it happened, but we know why it happened. There’s a prophetic kind of thing, another song by The Band, “The Shape I’m In,” there’s the lyric “now two young kids, might start a ruckus,” and that was Dave and I, we didn’t know it at the time, but we named it that.

David: Maybe that story we made up.

Matthew: Yeah, maybe it was really nonsensical, we can’t really remember why, I think we were in a basement somewhere and we were just going around in circles, like screaming out non-sequiturs, and that’s one that stuck. 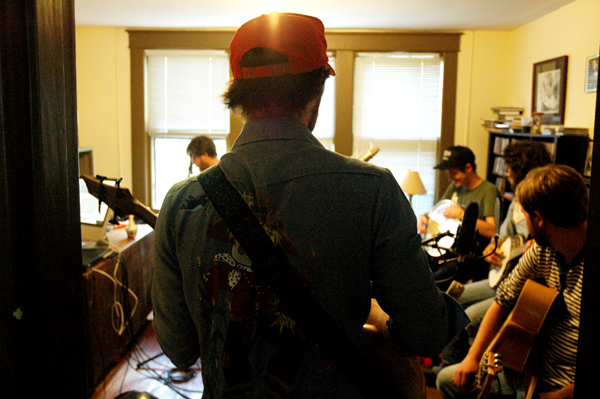 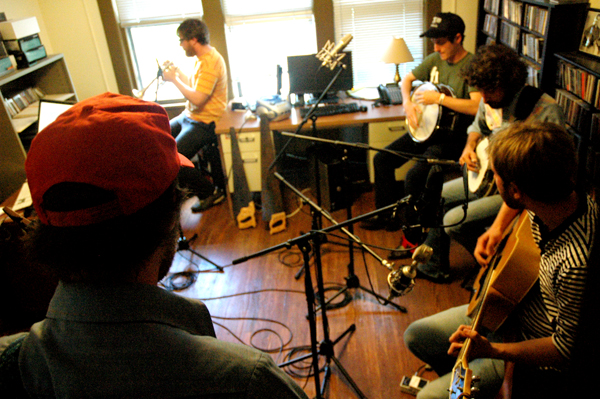 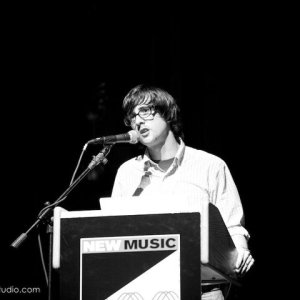