In this work I am pushing against an entrenched structure in American popular music. This album begs engagement from listeners. In this time of great struggle, I see this challenge to the traditions in music as parallel to the confrontations we are having as a nation. I recognize with gratitude that I am building upon a foundation laid by Black innovators, as well as Western “classical” traditions.

Sororicide is a fantasy in which process prevails and kills the desirable art object. I created this piece as a song cycle, a digital and physical album, and multimedia performance piece with the intention of laying bare my process – which I often regard with great shame. The performance of this piece incorporates projections by the artist Good Ribs (Ann Kraus) who also made the album art. My musical collaborators are Chris Maclachlan (bass and co-arranger), Malcolm Travis (drums and percussion), Pete Weiss (guitar), and special guest The Legendary Rich Gilbert (pedal steel). Our producer is Sean Slade; engineer is Benny Grotto; mastering was done by Pete Weiss.

The story of Sororicide centers around an artist whose inner voice is so deafening, she believes it is that of a parasitic twin she absorbed while in utero.   The “twins” were inspired by a work titled Die sieben Todsünden by Kurt Weill and Bertolt Brecht. In my work, they are meant to represent the internal struggle of the value of the unrepeatable experience of art (the process) and the value of an object.

“A Little Less Lonesome”
This person is already in hell – meaning they are damned so nothing can truly save them (love usually would be this thing).  It’s about finding shelter in a storm.  I was inspired by the parable of the serpent and the woman – she feels sorry for the serpent and picks him up and he bites her because he’s a serpent.

“Mid-nite Convenient”
I wrote this song with help from my friend Sarah Borges.  It’s about being drawn to darkness.

“All The Boys Love You”
This song was the last one I wrote – I actually finished it while we were in the studio.  I am a huge fan of Courtney Love’s voice – both what she says and the way she sings – I was really drawn to my producer Sean because of the way he was able to capture that incredible voice.  This song is about selling your soul – ignoring that screaming inner voice.

“Prologue”
The “twins’” world exists like a droplet of water inside this larger universe. In the greater story, a child loses something forever. She loses the god inside of her.

“Must The Winter Come So Soon?”
This aria, from Samuel Barber & Gian Carlo Menotti’s Vanessa, in its original form is meant to foreshadow the fate of a woman (Erika) who is doomed to repeat her aunt’s (Vanessa) fate of a solitary life. I wanted to take this song out of context and use its text to tell this story. We (Chris and I) have been experimenting with “classical” music this way for several years. For this piece, we used the piano score and extracted “riffs” for the guitar (Pete) and the pedal steel (The Legendary Rich Gilbert). The left hand of the piano part is covered by Chris on the bass. And then me on the vocals.

“Liederjahr”
Listening back, I think “Liederjahr” is an aria.  I need to write an opera for it to exist in.  I love the idea of an opera that incorporates these styles of American music and electric instruments.  So, stay tuned for that!  This song was inspired by Robert Schumann.  The German section is taken from a poem by Joseph von Eichendorff.  It translates to: “I can sometimes sing as if I were full of joy, but when the tears come, then my heart is truly free…”

“Malcolm’s Moon”
This song is named for my beautiful drummer Malcolm. In the band, each song kind of has someone emerge as the leader – he steers the ship in this one. It’s different every time so what you are hearing is a special moment. I see each member of my band as a soloist – if you solo-ed any of their recorded lines you would here something thoughtfully composed (by that person).

“Drink Her Away”
I kept trying to pull this off the record. I think I wasn’t ready to let it go! This one I wrote a long time ago so I feel like I am covering myself. But, I love the way it came out.

“Whiskey Dick”
“Whiskey Dick” is about straight-up out-of-control-drunken-hate. For us, that translates into the clanging and banging of the instruments and the belligerent howling and then some coherence and groove happening at the same time. It’s tough to describe, but this song was inspired by something that happened to me…it was someone I loved who crossed the line into that confusing space closer to emotional manipulation than rape (something I don’t have to explain to any other woman). Anyway, this is a musical expression of the rage I was left alone with and was too cool to express at the time.

“Toi, le coeur de la rose…”
This song in its original form exists as a tiny little aria in an opera called L’enfant et les Sortileges. It is this moment where a child loses his first love. This opera was the brainchild of the French writer Colette and composed by Maurice Ravel. Again, this was a moment where I wanted to take this piece out of its setting in the opera and use its language and music to tell part of this story. This moment where one of the “twins” dies.

You, the heart of the rose
You, the perfume of the lily
You, your hands and your crown
Your blue eyes and your jewels…
You left me like a ray of moonlight
One golden hair upon my shoulder
One golden hair and fragments of a dream

“Elijah”
This is a song of mourning. I wrote this when my dog Gus died. I thought it was such a perfect way to end the album, because for me, this song is truly the result of process winning the fight. 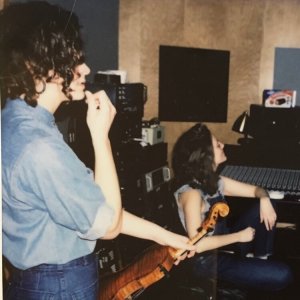