Pennsylvania isn’t usually thought of as a hotbed of the blues, but that’s the home state of Jeff Fetterman, one of the blues world’s best-kept secrets. His fourth album, Southern Son, features a dozen new songs that highlight his ferocious guitar playing and also feature a nod to a variety of the blues artists and styles that originated in the South.

Fetterman has been at it for over 30 years, but he wasn’t always playing the blues. “When I was a teenager,” he said, “and in my 20s and 30s, I did a lot of cover music, played in cover bands. But my heart wasn’t in it, and I finally just broke out on my own, started writing my own material and getting it out there, and finding people who wanted to play the original scene with me. I really started getting serious about doing my own music 12 or 15 years ago, and I’m at the point where I just really enjoy writing my own material, trying to be my own original person. I just find more total satisfaction in that than playing cover songs.”

For the new album, Fetterman took his band to the West Coast for a change of scenery. “We flew out to California and recorded it in San Jose,” he said. “We were out there for something like 16 days to get all the final mixes and everything done. We did everything pretty much live, a few overdubs but very little. We did rehearsals of the material for a couple months before we went out there so we could get in there and lay the tracks down as quickly as possible, and be as tight as possible.”

“The reason I called it Southern Son,” he continued, “is because we do play down in the South, we play down in the Carolinas quite a bit and I love the South. I’ve always been fascinated with the South, the culture, the music, everything about it. I might live further north, but in my heart I’m a ‘southern son.’”

With the exception of a cover of Jimi Hendrix’s “All Along the Watchtower,” Fetterman wrote everything on the album. “I’m the sole songwriter,” he said. “I write all the parts, all the lyrics, all the changes, everything. The whole album is original written by me, except for ‘All Along the Watchtower,’ the Bob Dylan song that Jimi Hendrix covered. Any guitar player is gonna be a Hendrix fan, he was a genius to me. So it was kind of a homage to him, it was out of respect for him, because I love the song and how he did it.” The versions by both Dylan and Hendrix were originally in the key of Cmi, and Fetterman performs it in that key as well.

Fetterman said his band is itching to hit the road, and that he’s hoping for the touring business to come back to life soon. “This year’s been screwed up but we do travel quite a bit,” he said. “We’ve gone to the International Blues Competition [in Memphis] for the last few years and we’ve toured a lot up and down the east coast, but we’re working on spreading out more to the west as well. We’re hoping things are gonna change for 2021. We’ve opened for Samantha Fish, Joe Louis Walker, Kenny Wayne Shepherd numerous times, Jimmie Vaughan – there’s a lot of national acts that we’ve supported. We do a lot of festivals in the summertime, and try to target the clubs that have the original Americana-blues type audiences.”

Fetterman’s playing has been compared to the work of the young Eric Clapton, the difference being that Clapton’s early work was performed on a Gibson SG, Les Paul, or ES-335, while Fetterman is a Strat cat all the way. “I like the Stratocaster because, to me, it’s just a solid guitar. It’s got a lot of versatility, and I’m a very hard player, and I don’t feel like I have to baby it when I’m playing. I did use a 335 for a while, and I like the sound of a 335, but I felt like I have to be very fragile with it, and I don’t like to feel that way about a guitar. With a Strat I feel like I can just be me.”

No matter what the future brings for the live entertainment industry, Fetterman is living the dream. “I love to do this. I’m obsessed with music 24/7, that’s all I wanna do. I love it.” 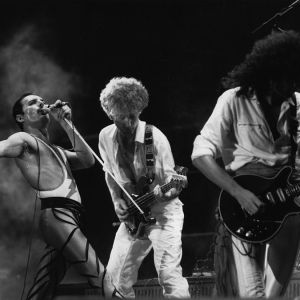