The band—including Barrier’s wife Kat (mandolin, washboard, saw), Stevie LaBlanc (washtub, banjo), Brian Borden (snare drum), and Justin Ward (accordion, trombone)—dates back a quarter-century to Auburn, where they rallied as a roots music community. Barrier, who had simultaneously launched a skateboarding company with his roommate, brought forth a dark-spirited approach to music from his adolescent influences—split between skating and punk music.

“Whenever the police would come after us, everybody would run in a different direction, so they’d have to choose which of the eight they were going to chase,” Barrier explains. “But every skater knew to meet up right beside my apartment, which was next to the Pine Hill Cemetery. I could open a window and walk out into the cemetery. It got to where we’d go into the cemetery with acoustic instruments and just jam.”

Henceforth, the group of friends embodied their band name. As to what Pine Hill is describing here, even Merriam-Webster is unsure. And no, it’s not a type-o. “Haint,” according to one source, is an alternative spelling of the word “haunt,” historically used in African-American vernacular to refer to a ghost, evil spirit, or witch-like creature. The lineage is acutely regional, tracing back to the Gullah Geechee people—descendants of African slaves who live predominantly in the Low Country and on the barrier islands off the Carolinas, Georgia, and Florida. Other sources trace the word back to archaic English origin and define “haint” as “to haunt or to inhabit aggressively.”

Providing some clarity, Barrier says, “Our band’s roots are so silly; we are just lucky to have come up with that and run with it the way we did.”

Initially inspired by the likes of John Lee Hooker and Johnny Cash, their signature sound extends from the fact none of the kids at the time knew how to play “real instruments.” Instead, they picked up the washboard or gourds to supplement the seamless guitar strums, coalescing into a more calypso-Caribbean sound. The band likes to say they preceded the contemporary roots revival that still bleeds into modern country, pop, and rock. But, as purveyors of Southeastern tradition, The Pine Hill Haints are not so much interested in popularizing non-mainstream folk as they are adamant in dwelling in their ancestral influences to endure a long line of stylistic storytelling.

“If you look at the Haints as a whole, even though we are punk skateboarders, we are little literary nerds,” says Barrier. “Almost every album has some reference to literary titles. The title of that book has got that charm. Many people where I’m from, and artists like Hank Williams, Bob Dylan and the West represented something to them—some starry-eyed place of possibility.”

Ahead of their forthcoming album, The Song Companion of a Lonestar Cowboy, The Haints premiere a new track, “Lone Star Kid.” The title is borrowed from stories that a friend of Billy The Kid published a hundred years ago about his adventures with the Irish-American outlaw. “Lone Star Kid” balances two schools of thought. The pandemic only exasperated the push and pull of the archetypal freedom presented in the American Old West and the notions of responsibility and what it means to “grow up.”

Lyrically, it illustrates the naïve nature of a wannabe troubadour, fleeing the haven of his mother’s nest and the cushy bounds of a pragmatic society. A desperate mother flings desperate warnings as a pleading effort to protect her young. Snubbing her sage advice, the young boy paints an idyllic portrait of a self-righteous path. Haunting harmonies sing I’m gonna rob the rich / I’m gonna give to the poor / If I’m not doing that / What am I living for.

The Haints’ frontman laughs and says, “I’m probably too old to go back and get a job now. We are in this—and we are in it junk deep. We are outlaws, and we made this bed. Maybe it was a dumb move, but here we are. And when COVID-19 hit, venues closed, it was like ‘oh, what are you going to do now, boy?’”

Since their 2007 full-length debut, Ghost Dance, the band stayed firm in their convictions, resurrecting country music’s long-lost traditions in a style they call “Alabama Ghost Country.” Barrier points specifically to the harmonic “purity” of the Carter Family’s emotive rendition of “You Are My Sunshine.” Their forthcoming project, recorded in the compact space of Sundrop Sound, focuses on their two-and-a-half decades worth of harmonies, aiming for something that “sounds like we’ve played together a million times.”

The fifteen song sequence kicks off with “Fall Asleep” and “Back to Alabama,” a fiery pair of rockabilly-meets-Irish-jig rave-ups, then winds through standout tracks like the Bo Diddley-grooved “Pretty Thing,” a pounding tom-tom and fiddle take on the traditional “John Henry” and the catchy, cajun-flavored squeezebox pop of “Lone Star Kid.” There are excursions into Sun Records-style country—“Midnight Mayor” and “Louise”—and swampy blues heard on the saw-singing “Wade in the Water” and “Downtown Blues,” featuring J.D. Wilkes on harmonica. Throughout, Barrier’s strong tenor voice rings familiar and friendly, with resounding echoes of everything from John Lee Hooker to Buddy Holly to Johnny Cash.

Listen exclusively to The Pine Hill Haint’s new track, “Lone Star Kid,” below.  Pre-save The Song Companion of a Lonestar Cowboy, due May 14 via Single Lock Records. 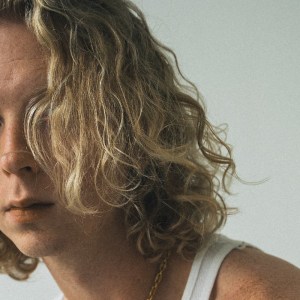