Mackenzie Scott was hungry to go bigger and bolder. Her fifth studio record, Thirstier, out today (July 30), revitalizes the singer-songwriter, known professionally as TORRES. “I was picturing big rooms and amphitheaters and trying to manifest myself in them,” she says. “I was trying to set up my own big stage ─ maybe if the music felt like it belonged on a big stage than I would get to play a big stage.”

Across 10 songs, Scott hooks the listener up to a high-voltage indie-rock cartridge, yanking them from the languid trance of “Are You Sleepwalking?” to hypnotically witchy closer “Keep the Devil Out,” in which the arrangement appears to scrape right against skin and bone. In between, she traces out her most electrifying set to-date ─ a stark contrast against her last record, Silver Tongue, a nine-piece far more intimate and low-scale.

“I kind of always had it in my head that after I made that record, I would make something that was totally the opposite,” Scott tells American Songwriter over a phone call last month. When the pandemic struck, forcing everyone inside, crushing claustrophobia set in, and all she could do was write. “Our worlds just got too small, and it was a way of writing myself out of it.”

Another characteristic that sets the two discs apart is her return to collaboration. Silver Tongue was self-produced, whereas Thirstier, its veneer both polished and deliciously jagged, finds her reconnecting with Peter Miles and Rob Ellis, the team behind Sprinter (2015) and Three Futures (2017). In venturing solo on her previous LP, Scott discovered her “own ability to translate my own vision to a recorded album. It did give me confidence, and it definitely revealed to myself that I had what it took to do it.”

“However, it also revealed the ways in which I can really benefit from working with other people and from producing with other people. There is this limitation that comes with just one person trying to bring their vision to fruition,” she adds. “You see yourself in this one way, and in working with Peter and Rob, it just really made the vision bloom into something so much bigger than it would have been otherwise.”

Thirstier is best described as bombastic. When she’s not clawing at the scalp with “Don’t Go Puttin Wishes in My Head,” she’s joy-riding through a synth-rock woodland on “Hug from a Dinosaur,” giving her voice license to play, leap, and do acrobatic tricks. Then, there’s the delicacy of “Big Leap” with which to contend, a plaintive number dedicated to her father who fell 30 feet and became “paralyzed from the waist down,” Scott reflects. Her feelings about the tragedy, even now, are best summed up with this line: It’ll haunt me forever.

“It’s one of the most painful things that’s ever happened,” she explains about the song, far more of an apology than anything. “Writing for me is not only a way of processing what I’m feeling but it’s also a way for me to communicate with the people that I love sometimes. Things that I feel that I’m not able to communicate in conversation. It’s me wishing I could have saved [him] from this. It’s a love song to my dad.”

Scott thrives in the unexpected, quickly sliding topsy-turvy into the rhythmically cluttered “Kiss the Corners,” a moment which also manages to feel earnest and healing. “I want to say that one had the biggest transformation in the studio, from the time that I wrote it to the time that it was actually made,” she remembers. Initially demoed with piano and flute “in my practice space,” she later took the barebones to her co-producers, and the trio peeled back the layers “and took the bones out. We actually left the flute in, which was pretty cool. But then, my producers were all trying to figure out what should go in. And then we ended up putting in a bass and drum beat.”

Throughout Thristier, Scott excavates many forms of love ─ from the stitched-on-quilts sort to the thrashing, in-the-throes of passion kind, and the variety that pitter-patters like summer rain falling across a windowpane. And each variant, however unintentionally or unsuspecting, feeds off one another in the most insidious ways. “I’m currently unpacking all of these questions in therapy, but I’ll unpack them with you. I’m totally comfortable doing that. Bad relationships hurt familial relationships. It touches everything else,” she reflects. “And it does touch your friendships, and it definitely affects your romantic relationships. For me, it’s just a matter of working through these things, and you’ve always got to dig deeper and find out how you really feel about something. When you have relationships with people, you can’t leave any rock unturned, and you have to always be discovering what’s lurking within the dusty corners of the room, even if you don’t want to. That is what becoming an adult is.”

“The work only gets more and more involved. You think you think becoming an adult means less work, but you’re discovering more and more about yourself every day,” she adds.

When “Keep the Devil Out” finally swoops in, its scatterbrained heavy metal spirals send the listener caterwauling and zapped like a hypnotist’s wheel cranked on high speed. Everybody wants to go to heaven / But nobody wants to die to get there, she hisses with venomous sprays.

“I had that line bouncing around in my head for a while. Lyrically, I would say that song was built around that chorus line,” Scott recalls. “But musically, I’m pretty sure I started with just a GarageBand beat, and I had this melody. I was trying to weave the first few lines around the beat and see if I could find something that was memorable and hokey.”

“My songwriting process is kind of loose and doesn’t really have a clear entry point. I put things together, you know ─ there’s a pile of the puzzle pieces over here but then there’s another pile of here, and then a pile over here, and I work on things simultaneously. Then ultimately, they end up getting pieced together but not in any sort of linear way.”

As dark as the record frequently dips, Thristier is actually “the first joyful record that I’ve made,” Scott says with a laugh, “but not every single aspect of it is joyful. I would say it’s definitely the brightest expression of my life thus far, I think.”

“What that tells me is that either I’m a really good actor or I’m actually a happier person now. I guess what that tells me is I’m surrounding myself with the right people,” she continues, “and I am in the right relationships. It revealed for me that I’m actually in a place in my life now where I feel like I can help other people find their joy. Certain days are harder than others, but I’m somebody who can actually be here for somebody else. Now, I can be a rock for other people. For a great deal of my life, I don’t feel like that was the case.” 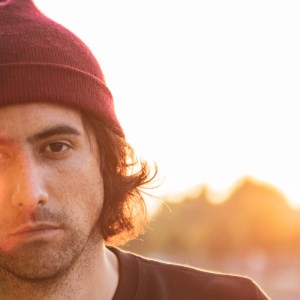