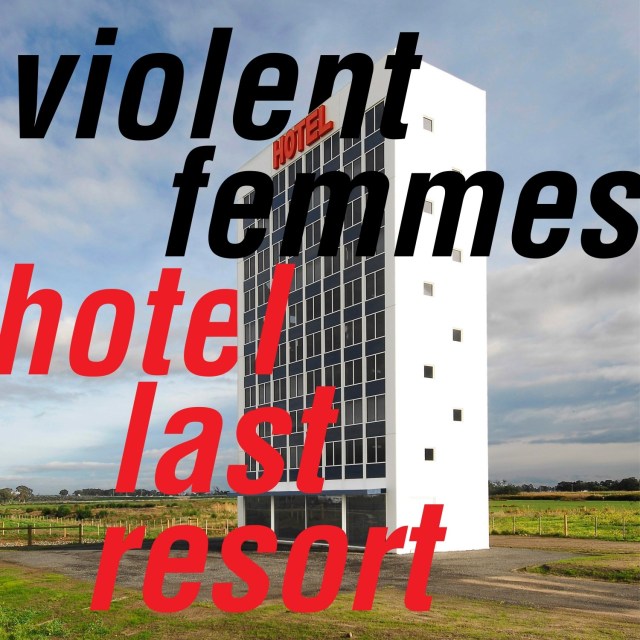 Unless you’re a diehard Violent Femmes fan, most will be surprised that this is the band’s 10th studio album. After all, few of their catalog songs get as much attention or airplay as those on the then trio’s (now quartet’s) stunning and still fresh 1983 debut. And if you think they haven’t been around for a while, that’s because they took a 16-year hiatus from recording, finally releasing 2016’s We Can Do Anything comeback.

But Hotel Last Resort could just as well be the Femmes’ second or fifth album. The twisted, quirky folk that’s both innocent and defiant remains distinctive, as does singer Gordon Gano’s perpetually strained, some might say fidgety, vocals. Even a guest appearance from Television’s Tom Verlaine refers back to earlier days. Only the addition of a fourth utility member in Blaise Garza (who handles mainly saxes and keyboards) is a change from the raw three piece line-up that cranked out such sing-along teenaged angst-filled anthems as “Blister in the Sun” and “Kiss Off.”

There are occasional deviations from that sound with the slithering Klezmer sax that punctuates “I’m Not Gonna’ Cry” (an obscure cover originally by a band called Pyx Lax) and the a cappela “Sleepin’ at the Meetin’,” a perfect example of how the group can strip down their sound to just voice and handclaps. Gano goes romantic on “Everlasting You,” complete with twang guitar, one of his few non-sarcastic love songs. But generally, tracks such as “It’s All or Nothing,” “Not OK” and the self-explanatory “I’m Nothing” could easily have slotted into the Femmes’ first album or any after that.

Since no one else sounds like this often raucous, minimalist group from the Milwaukee area, that’s not a bad thing. “I don’t change the chords anymore/ the chords change by themselves” Gano sings on the title track, as if referring to the classic Femmes blueprint these tunes follow. Still, he very much changes the chords on a bizarre version of “God Bless America” (yeah, that one) that closes this set on an odd note. As the disc’s longest tune, it clocks in at over 4 ½ minutes and wanders around directionless for most of that time.  Whether he’s being serious or this is a goof is impossible to tell and an odd jammy instrumental section leaves this mostly impressive album on a strange, inexplicable and somewhat uncomfortable note.

But strange, inexplicable and uncomfortable are descriptions the Femmes’ are likely proud of. Their ageing indie audience expects nothing less and should be more than happy to check into this hotel of last resort.