In January, the annual musical instrument trade show known as NAMM once again blew into Anaheim, California to create the world’s largest and most coveted music store. It’s easy to get distracted or even seduced by all the shiny instruments shown in the huge convention center, especially since some are dressed up special for the show. But here are a few undeniable highlights. 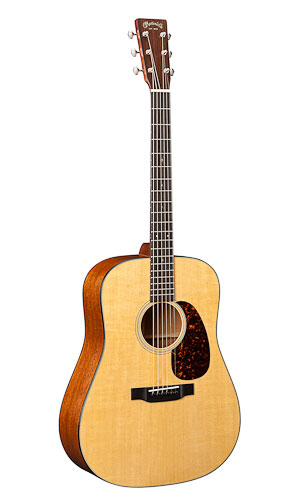 One strong contender for Best In Show isn’t  particularly flashy, but with its big sound and traditional standing, it provides plenty of street cred to the artist that plays it.  Martin’s D-18 has been a staple of their line since its creation, and a long-time favorite for recording in the studio. The 2012 edition has been revamped to include the most popular of its various features. This year, the D-18 returns to using ebony for the bridge and fingerboard, along with scalloped bracing and a now-faster, modern neck profile.

Gibson’s Jeff Tweedy SG is another revamp of a classic design. In addition to the Blue Mist finish on the body, found on the Wilco frontman’s personal guitar, the set mahogany neck has a natural finish. It has vintage style keystone tuners and an American Rosewood fingerboard bound with cream colored binding and Les Paul-style trapezoid inlays. The chrome hardware really pops visually against the metallic blue body, especially the large Vibrola Lyre tailpiece, which has classy art deco engraving. It’s powered by a pair of Burstbucker I pickups in the standard Gibson configuration. Perfect for peeling off a Tweedy-esque guitar solo a la “I’m The Man Who Loves You.”

Fender showed off a couple of models from their new Pawn Shop Special line of amps: the Greta and the Excelsior. Similar to old Valco amps in design, the Excelsior has a split chassis with the pre-amp with the controls on the top and the power section down below. With a minimalist approach, the amp has a volume control, a tone switch, a tremolo speed control (with switch) and three ¼” inputs.  Each input, labeled GTR, MIC and ACCORDION, has a different gain structure and each can be used with a guitar (of course) allowing for different ranges of distortion.

The amp cranks out a mighty 13 watts through a 15” speaker with an intriguing “E” cutout speaker grill with a slight wrap around look.  The best part about this amp may not be its tube design, but rather its price. The Excelsior has a street of around $300!

This is a six-string ukulele tuned a fourth above (A to A) a standard guitar , allowing the player to immediately begin using their breath of guitar knowledge and start applying it to Island styles.

A solid spruce top sits upon the mahogany cutaway body and a rosewood fingerboard caps the mahogany neck with a 17 ¼” scale length.  The Guilele is stage-ready with Cordoba’s 2Band pickup with a rim mounted pre-amp. In addition to being able to cop the ukulele’s sound and vibe, the Guilele can also function as a piccolo guitar.  Its compact size makes it a fine traveling companion.

Performing songwriters and buskers looking for rhythmic support may not have to look beyond their own two feet. Farmer Foot Drums’ flagship product, the Deluxe Foot Drum, allows you to accompany yourself with foot triggered bass drum, snare, hi-hat and more in one reasonably sized self-contained unit.

With both foot and heal pedals (six total) and a base made of naturally finished hardwood cut into organically inspired, artistic shapes, the Foot Drum looks great and is sturdy enough for the most enthusiastic players. Each pedal operates similar to a conventional kick drum pedal, with special design considerations for proper rebound for the snare and correct action for the tambourine, shaker, etc. Different percussion elements, including wood block, bells and cowbell are also available and are interchangeable with the included percussion.