The songwriting partnership of John Lennon and Paul McCartney stretched well beyond their songs for The Beatles. Throughout their careers, the duo wrote songs for other artists, together and individually, spreading hits out to the likes of The Rolling Stones, pop duo Peter & Gordon, and even their old bandmate Ringo Starr.

Throughout their peak songwriting era, 1962 through 1970, the duo wrote five hits for pop singer Billy J. Kramer, then with The Dakotas—”From a Window,” “I’ll Be on My Way,” “Bad to Me,” “I Call Your Name,” and “I’ll Keep You Satisfied”—and other British acts like Cilla Black, The Fourmost and even gave the Stones an early hit.

Though McCartney went on to work with multiple artists, including writing “Say Say Say” with Michael Jackson,” and wrote several tracks, including “Veronica,” with Elvis Costello, three albums with The Fireman project along with producer Martin Glover (Youth), and his 2014 collaboration with Kanye West for “Only One.”

We picked six specific hits written by Lennon and McCartney, together and individually, for artists during their particular heyday throughout the 1960s and ’70s.

Though The Beatles recorded their own version of the song, Lennon and McCartney gave “I Wanna Be Your Man” to The Rolling Stones first. Used as the band’s second single in 1963, “I Wanna Be Your Man” peaked at No. 12 for the Stones on the U.K. charts upon release. Initially, Lennon and McCartney wrote the song for Ringo Starr to sing with The Beatles, then later gave it to the Stones after a chance meeting when they hitched a taxi ride with Mick Jagger and Keith Richards in London. The Rolling Stones had just been signed to Decca. “They shouted from the taxi and we yelled, ‘Hey, hey, give us a lift, give us a lift,’ and we bummed a lift off them,” said McCartney. “So there were the four of us sitting in a taxi and I think Mick said, ‘Hey, we’re recording. Got any songs?’ And we said, ‘sure, we got one. How about Ringo’s song? You could do it as a single.”

“I Wanna Be Your Man” ended up being the first song The Rolling Stones ever performed on the BBC show Top of the Pops in 1964. Initially, Lennon and McCartney didn’t think much of the song for themselves but later recorded it for The Beatles’ second album With the Beatles.

Released by pop singer Billy Kramer and The Dakotas in 1966, “I’ll Keep You Satisfied” is one of several hits penned by Lennon and McCartney for the British singer that were never recorded by The Beatles. The song was recorded at Abbey Road Studios on Oct. 14, 1963 with Lennon reportedly present during the session. The song reached No. 4 in the U.K. where is remained for 13 weeks before it had to compete with The Beatles, who released “She Loves You” around the same time.

Having written several songs for the pop duo of Peter & Gordon already—“I Don’t Want to See You Again,” “A World Without Love,” and “Nobody I Know”—McCartney and Lennon wanted to write another hit for the pair with McCartney writing the song under the pseudonym Bernard Webb. In 1966, Peter & Gordon released “Woman,” which peaked at No. 14 on the Hot 100 chart. Lennon later wrote a different “Woman” for his 1980 album Double Fantasy, an ode to his wife Yoko Ono. Lennon’s “Woman” was the first single released after his death in 1980.

Badfinger’s “Come and Get It” (1970)
Written by Paul McCartney

Written by McCartney for the 1969 dark comedy The Magic Christian, starring Ringo Starr, Monty Python stars John Cleese and Graham Chapman, Peter Sellers, Raquel Welch, Christopher Lee and more, the song was performed by Badfinger for the film. “Come and Get It” ended up becoming the first single for Welsh rockers, previously known as The Iveys in the ’60s, and peaked at No. 7. on the Hot 100. McCartney had already recorded a demo of the song for The Beatles Abbey Road sessions, and though it never appeared on the group’s 1969 release, their version of “Come and Get It” was featured on the Anthology 3 compilation version of Abbey Road in 1996.

Off Ringo Starr’s third album Ringo in 1973, “I’m The Greatest” marked somewhat of an unofficial Beatles reunion. Lennon, McCartney, and Harrison all play on the track, the only time all four Beatles worked together following the group’s official break up in 1970. Individually, all three Beatles also wrote songs for Starr on Ringo. Lennon wrote “I’m the Greatest,” while George Harrison co-wrote “Photograph” and “You and Me (Babe),” and McCartney and his wife Linda penned “Six O’ Clock” for their friend. Written by Lennon in 1970 shortly after The Beatles’ demise, the song was inspired by the phrase Muhammad Ali often said “I’m the Greatest.”

“I couldn’t sing it,” said John in 1980. “But it was perfect for Ringo. He could say, ‘I’m the greatest’ and people wouldn’t get upset. Whereas if I said ‘I’m the greatest,’ they’d all take it so seriously.” Starr added, “It’s very tongue in cheek. Only [John] could have written it and only I could have sung it.”

Recorded at Electric Lady Studio in New York City, “Fame” became David Bowie’s first North American No. 1 hit on the Hot 100 and the Canadian Singles chart. The closing track off Bowie’s ninth album Young Americans in 1975, “Fame” was picked as the second single and one Bowie remixed 15 years later for his Sound+Vision tour as “Fame ’90.” Co-written with Lennon and James Brown guitarist Carlos Alomar, who also plays on the track, “Fame” addressed the ups and mostly downs of fame and fortune in lyrics inspired by a soured relationship Bowie had with former management—Fame (fame) what you like is in the limo / Fame (fame) what you get is no tomorrow / Fame (fame) what you need you have to borrow. “We’d been talking about management, and it kind of came out of that,” said Bowie of coming up with the concept of the song with Lennon in a 2003 interview. “He was telling me, ‘You’re being shafted by your present manager’ (laughs). That was basically the line. And John was the guy who opened me up to the idea that all management is crap. That there’s no such thing as good management in rock and roll and you should try to do without it.”

Bowie added, “It was at John’s instigation that I really did without managers, and started getting people in to do specific jobs for me, rather than signing myself away to one guy forever and have him take a piece of everything that I earn—usually quite a large piece—and have him really not do very much.” 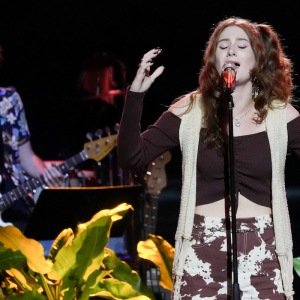