You’re a mean one…

Now, all of a sudden, you immediately hear that bass-clef voice. Maybe, in your mind’s eye, you even see the classic grainy animation, too.

That’s right, it’s Christmas time and we’re getting ready to dive behind the song of the indelible family favorite, “You’re a Mean One, Mr. Grinch.”

Written for the 1966 cartoon special, Dr. Seuss’ How the Grinch Stole Christmas, the song has somehow since transcended even that transcendent cartoon classic show. Dr. Seuss (born Theodor Seuss Geisel, but that’s nowhere near as fun!) published the original storybook in 1957, right after The Cat in the Hat and right before The Cat in the Hat Comes Back. The legendary writer, who died at 87 in 1991, also created the drawing of the green, fuzzy Grinch.

Dr. Seuss, whose work underwent some controversy recently, also wrote the song lyrics that accompanied the animated television version of the holiday special, which came out nearly a decade after the book. The music was written by Albert Hague, a German-American musician who was born in Berlin and escaped Hitler’s army by fleeing to Rome and then America in 1939. His sister, who lived in Ohio, acquired him a musical scholarship at the University of Cincinnati. To enroll, Hague was adopted by an eye surgeon associated with the university. He graduated in 1942 and served in the U.S. Army during World War II fighting the Nazis. He died in 2001.

The classic song was performed by singer, Thurl Arthur Ravenscroft, an American actor known for his bass voice. Notably, he also voiced Frosted Flakes’ Tony the Tiger for 50 years. (You can’t make this stuff up.) For a long time, Ravenscroft went uncredited on the song. A longtime Disney employee, who did cartoon and theme park voice work, Ravenscroft began in the business in 1940. He died in 2005 after finally getting credit for his work in How the Grinch Stole Christmas. The show’s soundtrack won the Grammy Award for Best Album for Children in 1968 and peaked at No. 32 on Billboard.

Prior to receiving proper acknowledgment, the performance had been falsely credited to Boris Karloff, who narrated the special. Karloff (Born William Henry Pratt) was an English actor who starred as Frankenstein’s monster in the 1931 horror film, Frankenstein. He was an icon in the genre. Karloff got a star on the Hollywood Walk of Fame in 1960. Some also thought the singer might have been American singer, Tennessee Ernie Ford. But it was the GGGRRREAAAATTT Ravenscroft all along, who sang the Dr. Seuss penned lyrics.

The television special first aired on CBS on December 18, 1966. And it’s likely aired every year, hundreds of times, on channels annually ever since. You’ve probably seen it 100 times, yourself. But just in case: the green, fuzzy Grinch, who lives alone (with his dog) in a cave above the pleasant Whoville, decides to ruin Christmas by stealing all of the townspeople’s presents and decorations. He disguises himself as Santa Claus, slithering around their houses, and achieves his goal only to later realize the error of his ways. Only then does his heart grow and grow. But before he can learn his lesson, he must be mean.

You’re a mean one
You really are a heel
You’re as cuddly as a cactus
You’re as charming as an eel
Mr. Grinch, you’re a bad banana
Mr. Grinch, with the greasy black peel

You’re a vile one
You got termites in your smile
You have all the tender sweetness
Of a seasick crocodile
Mr. Grinch
You’re a foul one
Friends you don’t have none
I wouldn’t touch you with a 39-and-a-half foot pole!

Likened to spoiled fruit, our friend the Grinch is just that. Until he learns the magic of Christmas, the joy of togetherness, and the essence, really, of love. Then he sweetens That’s why this song is so fun, we can indulge our grinchy side while coming out the other end with a quick remembrance of why the end of December can feel so magical. And that we get to do it, again and again, each year only makes us fall in love with this song and this unlikely symbol of Christmas: the green, fuzzy Grinch. 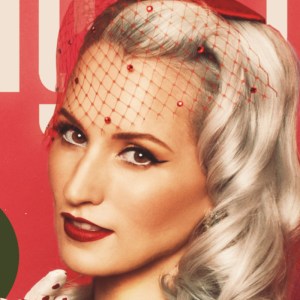