Like its American counterpart, the competition show Britain’s Got Talent is unafraid to pull on the heartstrings.

In a recent episode, the show held auditions for its fifteenth season. One auditionee, however, was not on the queue of people set to audition for the show—Nick Edwards gave a performance that surprised the judges, the audience, and even Edwards himself.

The performance began when unknown to Edwards, his two daughters and mother walked onto the BGT stage. Edwards was sitting in the audience and seemingly unaware of what was going to happen next. “Well, Nick doesn’t know anything about it,” Edwards’ mother Tracey began to explain, “and we’re surprising him because we want him to come and sing because he sings a lovely song for the girls. Come along, Nick.”

Edwards, in tears, moves from his seat in the crowd up to the stage and ends up performing an emotional cover of “Daddy’s Little Girl” by Ernie Halter.

“Oh wow, we had a whole day planned. This is a complete shock to me,” Edwards said about being called on stage. When asked why he said he’d never do BGT the singer replied, “I think over the years I lost a lot of confidence in my singing. I tend to do it at home in the shower.”

“It was so sweet, you have a nice voice,” judge Simon Cowell said of the performance.

Judge David Walliams added, “It was just so moving from start to finish… there’s not a dry eye in the house and that really hit me emotionally more than anything else today.”

Edwards received four “yeses” from the judges, ensuring that he will move on to the next round in the competition. The singer and father also got a standing ovation from the audience, the group he had just minutes before been a part of.

Not everyone was moved, however, and many questioned if Edwards’ performance had been staged.

“We loved welcoming back our BGT viewers back last night after a year away,” BGT began in a statement to address the doubt. “To report or allude to anything being staged or contrived regarding Nick’s audition would be false and incorrect.

“Quite simply, when Nick entered the Palladium auditorium during BGT auditions, he was approached to be part of our ‘gogglebox’ audience and told he would be mic’d up so we could capture his reactions throughout the day as he sat in the audience. He was totally unsuspecting. We did this so we could mic him up without him suspecting a thing.” 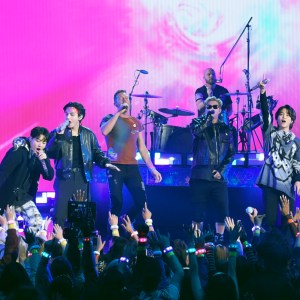