Singing since she was six years old, Carrie Welling’s upcoming album is her most authentic work yet. A self-described hopeless romantic, with a tinge of cynic, will share a record of songs close to her heart, after years of playing music she thought others wanted to hear. Initially set for April 3rd, she delayed the release of High Heels and Heavy Things indefinitely until the current situation passes.

Welling found solace in Nashville after a decade in New York City and a quick soul-searching stint in San Diego. She lost direction as an artist when her female duo in the city broke up after many years. In her search for fertile ground, Welling was stuck between Nashville and LA. Who she knew in Nashville and what she saw in the supportive community drew her in. She moved to Nashville for what she said would be one year for her album production, and there she has stayed for five.

The friends she made in Nashville ultimately saved her as an artist. Ready to give up on her career, Welling’s friends, Eric Hölljes, of Delta Rae, and local producer and artist, Alex Wong, encouraged her to take a leap of faith. They convinced her it was time to write about things important to her, rather than fitting an ever-evolving mold. “I started writing about the truth, and people started actually loving it,” explained Welling.

Welling began on this trajectory with the thematic, “Good to Me.” The song explores the idea of what we imagine our lives will look like at particular milestones and the sometimes stark contrast that comes with the reality when you arrive.

“The first line of that is talking about how I did not think I would be here, and I have waited on these record executive people as a server, and it just felt so crappy,” she remarked. “So I put that in the first verse and the second verse is about me looking at myself in the mirror and realizing I have to be cool with this or I will not be able to move on. I had to be “good to me” and kind to myself.”

The rest of the record followed this lead. Number two in her trio of single releases is “Stand Ins.” The track, co-written with Mary Bragg, features vocal support from Delta Rae. The message strengthens with each lyric line, empowered by soaring harmonies. As the opening instrumentation suggests, the song originates from a place of anger and frustration.

“I was just going through this phase – again like real life stuff – where I was just tired of having these people in my life and not finding my person,” Welling shared.

“If you listen to the bridge of that song, I name real people. Not names, but I have the high school sweetheart, the New York drummer I should have left alone. People will be like ‘are they real?’ and some people know who they are, and I am like, ‘I really don’t care.”

Welling’s latest release was “Settle Me Down.” Growing up a military brat, there are few places she hasn’t called home. She credits the experience to the outgoing person she is today. However, it was not until later in her life did she embrace the fact she didn’t have a singular place to call home.

“I find myself blaming my moving around on the reason why I haven’t found my person because it is going to have to be a very special person,” Welling said. “I am like a gypsy who likes to move around, and it has made it harder to find someone – because it is not a steady life, but I don’t know if I’d like a steady life.”

Forfeiting certain ideals of a “steady life” is part of an artist’s nature. During unprecedented times, such as these, plans change, and flexibility becomes mandatory. Welling, who has canceled plans for an album release party April 3rd at Analog in Nashville, then a tour route mapped across the country with Delta Rae, has had to re-think her entire year.

“Life as a musician always keeps you on your toes. But this pandemic has thrown even me for a loop. It’s been a bit scary, especially since touring and shows are my main source of income. I have been trying to roll with it, even turning my gig life into virtual live stream shows. I have found that people are watching and engaging in real-time, which is so cool.”

Welling has replaced her April 3rd album release plans with a live stream celebration and release of another single. This follows a live performance on the Stageit platform that sold out twice. A live album release show has always been a dream of hers, so the album release date is still to be determined.

Get tickets to her live stream single release show for “Flames” on April 3rd. Keep an eye out for her upcoming album, High Heels and Heavy Things, later this year. 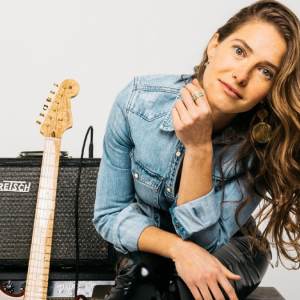