Search
Cart 0
Menu
Churches plays the Bonnaroo The What Stage on Friday June 10, 2016

The main stage was abuzz with electronic-powered acts Friday night. Scottish trio Chvrches redeemed their strange and oddly short 2014 performance with a killer set around sunset, with an ethereal-looking Lauren Mayberry bursting with energy as she ran around the stage for the entire duration of the show. Though they were served a slight injustice with their set time — the band’s stunning light show lost a lot of its impact in the daylight — the seamlessness of the performance kept morale high among fans standing in the nearly 100-degree heat.

Mayberry and company got started with recent hit “Never Ending Circles” before launching into old favorites like “We Sink” and “Gun” and tracks “Empty Threat,” “High Enough To Carry You Over” and “Keep You On My Side” from the band’s 2015 album Every Open Eye.

Repeating the surprise appearance the band pulled out for a Nashville show in late 2015, Paramore singer Hayley Williams took the stage to join Mayberry on “Bury It,” with Mayberry noting that it was Williams’ first ever Bonnaroo appearance. That seems odd, considering Paramore’s massive success and the generally high number of Nashville acts that tend to play the festival every year, but Williams knocked her debut out of the park either way. The band closed with their career-launching hit “The Mother We Share,” which Mayberry introed with a slow, smoldering, nearly a-cappella version of the song’s chorus.

A packed crowd welcomed LCD Soundsystem to the stage at minutes past 11 and got dancing right away as the band kicked into “Us V Them,” a track from their 2007 album Sound of Silver, and staple “Daft Punk Is Playing At My House”. The show’s sound was remarkably flawless, potentially the best of any Bonnaroo set in recent years. Though festival sound can often be a bit muddy, each of the instruments was impeccably balanced with the others, and even fans in the very back of the crowd could make out Murphy’s words with an unwavering crispness.

A few songs in, singer James Murphy took a moment to announce that the band were all highly hungover after a night of partying on Thursday and thanked the crowd for its patience, though it wasn’t obvious whatsoever that the trio were operating at anything less than 100 percent. Whether it was the truth or a bit of stage banter aimed to raise morale, the crowd roared into thunderous cheers at Murphy’s confession.

Over the duration of the hour and a half set, Murphy danced and kicked through most of the band’s most popular songs, including “I Can Change,” “You Wanted A Hit,” “Tribulations,” “Yeah (Crass Version),” “New York, I Love You But You’re Bringing Me Down,” “Dance Yrself Clean” and closer “All My Friends”. It was a triumphant return for LCD Soundsystem, one that certainly washed away any residual resentment amongst fans over the band’s breakup five years ago. 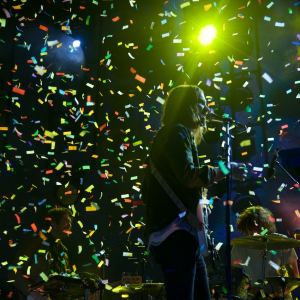 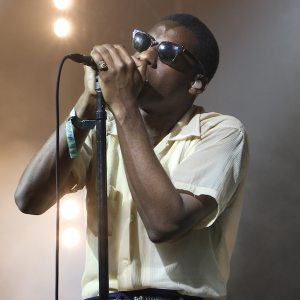