“There’s a dark atmosphere that looms over all of my tracks,” Omar Doom tells American Songwriter. “I couldn’t tell you where it comes from, but it’s been my dark passenger since the beginning.” Known foremost as an actor, having starred in several Quentin Tarantino movies, including his supporting role as Jewish-American soldier Pfc. Omar Ulmer —who ended up killing Hitler—in Inglourious Basterds from 2009 and Donnie in the director’s most recent film, Once Upon a Time In Hollywood, Doom, born Omar Makhdomi, is immersed in his own real-life soundtrack, scoring Vol. 2 (Negative Gain Records), a continuation of his 2021 debut Vol. 1, as Straight Razor.

Submerged in impenetrable drum-and-synth, scene to scene (track by track) Vol. 2 adds tension and urgency, from the futuristic doom of “Enemy” and the pulsing “Astaroth” racing into the denser thud of “Mantus” and a frenetic “Leviathan.” The story comes to a close with an electrified “Lady Midday,” which also appears in the 2020 comedy-horror Spree, starring Stranger Things star Joe Keery.

Growing up on everything from classical Indian music, 1980s new wave, American pop, and Front 242- and Nitzer Ebb-era electronic and industrial music, all while wired around art house films and horror movie soundtracks, Doom’s roots are evident on both Straight Razor volumes.

Moving to Los Angeles after studying at Parsons School of Design in New York, Doom started a clothing company with his sister and was soon given a small role in Tarantino’s 2007 thriller Death Proof. It was Tarantino who encouraged Doom to pursue acting. “Music came before acting for me,” says Doom, who first dabbled in metal bands during high school. “Acting is something I always wanted to do but never thought it was possible. When I moved to LA, I started meeting successful actors and directors that showed me that the acting dream is possible.”

Still open to new roles, Doom has circled back around music and recently remixed electronic producer Corvad’s Unreal Remixes. Doom took a few moments to talk about making movies, his dream of writing and directing horror films, and picking up the beat with his next batch of music.

American Songwriter: How did Vol. 2 start piecing together since Vol. 1, and what’s the link between these five songs?

Omar Doom: I had Volumes 1 & 2 mostly planned out from the beginning, but I saved a couple of spots for new tracks, the newest being “Enemy.” This is mainly because I knew I didn’t have the single yet. I also wanted to wait a while before starting new tracks so I could have as fresh of a look at everything as possible. I think there’s a dark atmosphere that looms over all of my tracks. It’s the doom factor I guess you could say. I couldn’t tell you where it comes from, but it’s been my dark passenger since the beginning.

AS: Were there any tracks that took a bit longer than others to complete?

OD: After I made Volume 1, I somehow ended up losing most of the hearing in my right ear [and] developed screamingly loud tinnitus. After extensive tests and treatments, which included having steroids injected into my ear drum, doctors were not able to figure out the cause. This put a real strain on my writing process. “Enemy” is the first track I made since my hearing loss, so it took a little longer than the rest. I did a lot of turning my head sideways to face the speakers and then running back and forth between the left and right speaker. I’m sure it was a sight to see. In the end, I somehow made a track that I’m really proud of. Maybe it was the angst from my situation that you can hear coming through the track.

AS: You’ve been remixing and reworking music outside (Corvad, etc.). Was there something specific you wanted to approach sonically on this EP?

OD: I wanted Vol. 2 to be more of an extension of Vol. 1 so the approach was similar. I knew I needed a strong single that stood out the way “Iblis” did on Vol. 1, so that’s what I set out to do when I made Enemy.

AS: It was still a different time and place when you released Vol. 1, and though it’s only been a year, are you still connected to that first batch of songs now?

OD: For a while, I was somewhat concerned that I wasn’t going to make an EP that lived up to Vol. 1, but these are anxieties that all musicians possess. Looking at them together now, I’m happy with how they both came out, especially given the circumstances with my hearing. My latest track is always my favorite, so “Enemy” is my current jam.

AS: Described yourself as a songwriter. How do songs come together for you?

OD: In terms of the source of the initial inspiration that makes the light bulb go on in my head, I’m still influenced in the same ways for the most part. I watch a lot of movies so a lot of influence comes from there. I’m out and about a lot less these days so not as much is coming from hearing DJs or live music. I’d say that’s the biggest difference.

AS: You’ve been acting for more than 15 years or so now. Creatively, do the two worlds ever collide for you in any way?

OD: I’ve written a couple of horror scripts and have new ideas for movies I want to tackle in the future. My ultimate goal is to write, direct and score my own films a la John Carpenter. His films and soundtracks are a big influence of mine. You can probably hear his inspiration in some of my music. As you can imagine, working with Kurt Russel in Death Proof was a real treat.

AS: Where does acting fit into what you’re doing now? Are you still open to roles, or do you find yourself leaning more into the music?

OD: I definitely want to keep acting. I have so much fun on movie sets, and just acting in general. I know that I’ve been spoiled having worked with Quentin Tarantino in three movies. Tarantino sets are known to be more fun and memorable. For example, Quentin would curate mixes of cool ’60s jams that would play on loudspeakers in between shots. It really feels like you’re celebrating making a movie every day. As for the music, I can always find time to make music. When I do make music, it’s usually in spurts, so there’s a lot of time spent doing other things, like making art.

AS: Now that Vol. 2 is nearly out and you’ve had some time with these songs, what kind of songs do you find yourself gravitating towards now?

OD: I spent a lot of time lurking in slower bpm’s [beats per minute] on both of these EPs. After making a lot of mid-tempo [songs], I can see myself going for some more fast, club-oriented tracks in the future. I also want to experiment with live instruments and record some guest vocals. I may do some singing on there myself. 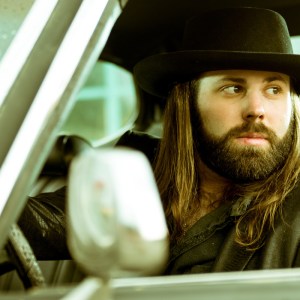