Every day is an adventure, and Dustin Lynch is living his best life. Just back from Mexico, Lynch performed as part of Luke Bryan’s annual Crash My Playa event and debuted the new single “Party Mode,” off his fifth album Blue In The Sky (Broken Bow), out Feb. 11. “I got my tan on,” jokes Lynch, who decided to name his upcoming tour after the more uptempo breakup song.

“It’s very optimistic,” says Lynch. “Honestly, when I saw the title, I was a little bit nervous and scared thinking ‘how the world is this going to be written.’ The Nashville songwriter community are geniuses. They figured out a way to make it feel good. I’m excited to have a country song like that. We haven’t really done a song like this ever, so it’s fun to have a new flavor to be up there playing.”

Following up his fourth album, Tullahoma in 2020, the momentum never waned for Lynch, who continued writing through the pandemic, weaving together Blue In The Sky, a collection of songs paying homage to the greater outdoors, better times, and relishing in new beginnings after a breakup.

Produced by Zach Crowell, Blue In The Sky reveals different colors, space of nature, time, place, and emotions, opening on “Party Mode” and revisiting the No. 1 single “Thinking ‘Bout You,” featuring MacKenzie Porter—a song Lynch first sang with Lauren Alaina on Tullahoma—through a more revelatory song of the times,  “Somethin’ That Makes You Smile.”

“These songs were sent to me when I really needed to hear them,” says Lynch. “That’s what’s so special about music. There are so many talented folks that are writing songs for us artists on top of us writing songs for ourselves.”

“Party Mode” was a song that came to Lynch when he was on the other side of a breakup. “For me, it was a big weight off of my shoulders,” says Lynch. “Breakups suck, but they’re not always a bad thing. You can fulfill yourself and feel excited again about life and what life holds and all the unknowns.”

He adds, “‘Party Mode’ was sent to me right after that window of time. It was a perfect match for where I was, and getting to do a lot of living out on the boats because we weren’t touring as much, so it just fit perfectly.”

Co-written by Erik Dylan, Andy Sheridan, Wyatt McCubbin—marking the first cut for all three writers—“Somethin’ That Makes You Smile” is another track that came to Lynch at the right moment. “It’s a song that reminds me to take advantage of these days that I have off and make sure that I’m spending time with the people I need to be spending time with—my friends, my family, my niece, my nephew. Life’s too short to get caught up in the race.”

An ode to the great wide open, and the more internal struggles, Blue In The Sky meets the natural elements of life from the more levitous times on “Tequila On A Boat” featuring Chris Lane, “Huntin’ Land” with Riley Green, and the more nostalgic “Pasadena,” a track Lynch initially wrote in 2013, which resurfaced in 2019.

“I wrote that song about a night that I had in Pasadena, Texas, but this particular day, I was writing in Pasadena, California, and it reminded me of that song,” shares Lynch of the track. “Just for kicks, I sent it to my producer, because it was definitely not something that would have been in our wheelhouse… and he shockingly loved it.”

Slowly teasing Blue In The Sky, “Pasadena” was one of five tracks Lynch began teasing in 2021, along with “Tequila on a Boat,” the slow crooned “Not Every Cowboy,” “Thinking ‘Bout You,” and ‘Huntin’ Land,” to build up the release while he was off the road.

“It’s been a hell of a journey,” says Lynch of making Blue In The Sky. “Even though there’s a couple of breakup songs on it, it feels very optimistic to me. [It’s] just going back to being optimistic about the unknowns of the journey of life, and not having the weight of a program. A sense of wonder, a sense of freedom, I think, for me is very inspiring.”

Blue In The Sky also came together during a transitory time for Lynch as a songwriter, working through the pandemic, and a decade after his self-titled debut. “It’s changed how I’d like to write,” he says. “I think 2020 really changed how we were writing because we were forced to do it virtually.”

Writing in between constant outings, Blue In The Sky reflects the outdoors that inspired many of the tracks. At one point, Lynch was writing through a week of house boating in East Tennessee—Zooming in to write, then play.

“That has allowed us to realize that we can cram a lot more songwriting around fun plans and family time,” says Lynch. “Writing with guys that are down at their beach homes in Florida puts them in a different headspace, even if I’m up here in cold Nashville, so I think that really kind of pulls us in different places, versus all being cold and drinking coffee up here.”

Lynch adds, “The creativity since I started has changed because of that. When I first started, there were no tracks, it was just us with guitars and piano in a room. Now, we are able to have multiple options of musical beds to live with, and come in with a game plan the day we write the song.”

Still, Lynch says songs are driven by melody and phrasing for him, working around a collection of hooks he’s collected over time. “I have a list of hooks that come to me at weird times,” he says, “but I usually don’t attack that hook until the music feels appropriate. I still let the music kind of drive where I write.”

Another “new process” for Lynch is dedicated writing retreats. “We found a lot of success on those retreats, where songs would come to be outside of your typical Music Row write or your typical on the road write because we were able to live with them longer. Those dedicated retreats really opened my eyes on how I am going to continue to find success and have fun—go explore and do life with these friends outside of the rigid hours of music row.”

Looking for the next adventure, Lynch is currently working on getting his pilot’s license and is about to head into a more remote part of Texas, where the night vista inspired the Blue In The Sky track “Stars Like Confetti,” at a 30,000-acre ranch with no towns within the vicinity and very little light pollution when the evening sets in. “I like the unknown,” says Lynch. “I like the freedom, at this point in my life… and just being available to go on an adventure at the drop of a hat.”

Ready to create again, Lynch is pulling from all directions, absorbing every new experience and seeing where the next songs land.

“I really want to keep digging in,” says Lynch. “I feel like this album really shows who I am as a person, outside of performing on stage. I drive my team crazy, because I’m always on the go, whether it’s on the water, out of my farm. I just love doing stuff outside, so that’s probably why I’m starting to paint with a little bit more with those themes. This is where I am in my life right now.” 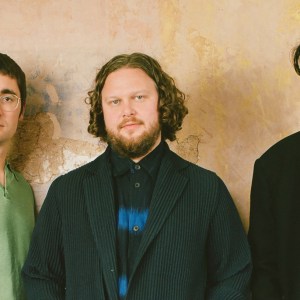