“Haunted” is an apt term to describe the music of Cinder Well, a.k.a. Amelia Baker. Taken in an ominous sense, the ethereal texture of the sparse acoustic guitar/soundscapes coupled with her wispy vocals creates an atmosphere of foreboding and unease, like a spectre on a widow’s walk overlooking a midnight shore. In an emotional sense, Baker is haunted by isolation and the vast void it creates deep within her core. Fortunately, the void it created didn’t cause despair but creativity and self-awareness.

“I wrote [‘Fallen’]when I spent half a year in Alaska in my early 20s,” Baker recalls of her self-imposed social distancing nearly ten year ago. “I remember writing it in one sitting, next to a fire I built outside of the cabin I was staying in. Living in that cabin up there was my first experience with true isolation, and it was strange at first but I grew to cherish the insight and strength it ultimately brought. I remember that the song came out as a response to the environment in Alaska, and the immediacy and quiet of that moment around the fire. “

This detached and sequestered existence figures deeply into the vulnerable and deeply poetic track.  Stark and raw, Baker’s naked voice lends nicely to that feeling of isolation. Like the deep examinations of grief by Mount Eerie or Emily Haines’ profound plunging into her psyche, “Fallen” occupies the contemplative space of gloom folk without being overwrought and precious. Its uncomplicated musical canvas may have a minimalist appearance, but its depth is unfathomable.

When it was time to record her new album No Summer, she opted to recreate that spaciousness of Alaska in Anacortes, Washington. A tiny city north of Seattle, she holed herself up with producer Nich Wilbur (Hungry Cloud Darkening, Angel Olsen) in The Unknown Studio which was converted from an old church. The quiet reverence and hallowed air of the chapel proved to be the perfect setting for her music.  “I was sleeping in the church, and it felt haunted, but it gave me this incredible experience of being really focused,” she recalls. “I was listening to David Lynch’s audiobook about creativity every night. I was in a zone where I had a very clear image of what I wanted to capture in the sound and the story of it.”

What she ended up with is a gorgeous lo-fi ballad, seemingly mournful and tortured, but instead powered by strength and independence. It’s a fusion of tradition folk and indie rock, with a post-rock chaser. Like the spectral nature of her music, the song “Fallen” too had haunted her until she committed it to recording. “It is the oldest song on the record,” she reflects. Originally recorded for her debut self-titled EP, she re-recorded it for this album. “The song has somehow stuck with me through the years, and we still tend to play it at live shows,” she adds. “I didn’t initially plan for it to be on this record, but when in the studio, it felt like a natural part of the whole.”

Now living even more remotely than either Alaska, Washington State and her home of California, Baker has found herself residing in County Clare, Ireland. Beautiful and lushly green like all of the Irish countryside, it’s given her peace and serenity, especially amid the current pandemic. “Lockdown is such a bizarre experience because everyone is experiencing this disruption from our social lives, but we’re all experiencing it at the same time which actually creates a sense of understanding and comfort in that alone-ness,” she explains.

Unlike the first experience with isolation in Alaska where creativity arose in the midst of that self-imposed solitude, this legally mandated quarantine and lockdown in Ireland has been less conducive to songwriting. “I would have loved for these months of a slower life to have led to lots of music writing, but to be honest I haven’t found the time of a global pandemic time to be all that inspiring,” she confesses.

If anything is “haunting” her these days, it’s the cultural and civil plight of her home country of America. As it undergoes socio-political unrest and a shifting of awareness, Baker is beginning to feel creativity building and hopefully will mine it for new music in the future. “It is very hard to plan anything at the moment, especially while living very far from home and travel being complicated,” she concludes. “But the global movement for Black Lives and the revolt against White Supremacy is incredibly inspiring. I’m listening and taking that in, and will be responsive to the musical creativity that arises within me as a response to it all.” 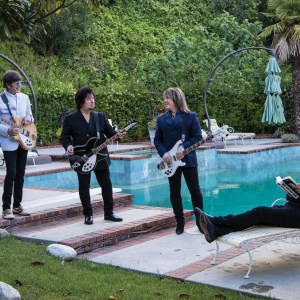