In 2019, Jacob Michael and Jesse Clasen rented a car and embarked on a mini roadtrip on their way to Nashville. Driving from Washington, D.C. through Virginia, North Carolina, and Kentucky before landing in Nashville, they got glimpse of America that would inspire their new single “I Believe.” At the end of the road, in Nashville, is where the duo also ended up writing 15 songs in 10 days for their debut full length album Good Morning Stranger, Oct. 16.

After some time on the road, it was immediately clear how D.C. was the most different to its surrounding states, which roused Michael to start writing song about unity… and a belief in change. “I Believe” is one piece of Foreign Air’s latest creation. Fused in electronic rock, Good Morning Stranger is departure of sorts from their A departure from their previous “lives”—D.C.-based Michael, a former member of U.S. Royalty, and Jesse Clasen, based in NY, previously with The Bear Romantic and HRVRD.

Since coming out of the indie rock world together, both started dipping into electronic music, and experimenting more with different sounds… a foreign air. A part of the D.C. culture that has spewed electronic duo Thievery Corporation and Flash and warehouse parties around town, Michael was playing around with Moog synths and Native Instrument’s Maschine, and doing production on his own. “All of a sudden, we were surrounded by a bunch of new tools, new sounds, and new recording techniques to paint with which inspired a lot of the early song ideas,” says Michael.

Clasen, who was always into electronic music and R & B—even playing in a hip-hop-electronic band in college—welcomed the return to his electro roots after a decade in more experimental rock. “Its’ always necessary to push yourself and keep the blood flowing in the brain,” says Clasen. “Electronic production is so different than what we were doing before. We spent a lot of time on YouTube learning different techniques.”

Geared up with MPCs, Machines, Moogs, Junos, a Mellotron, an orchestrator, and a few Korg drum machines from the ’70s, Foreign Air were transfixed on the sensation of the concocting their own soundscape. “It’s been really fun touching the knobs and faders as opposed to using all soft synths,” says Michael.

To both artists, the name and concept of Foreign Air was rooted in experimenting with sound and instrumentation.

Spending a majority of their 20s touring in vans and sleeping on floors, when everything abruptly in their previous bands, both felt uncertain about their future and in between working in bars and restaurants to get by, Michael would drive down from D.C. to North Carolina, where Clasen was living at the time, to work on songs on days off. Within a few months, everything shifted for Foreign Air after they released their first single “Free Animal.”

“Everything changed for us overnight,” says Michael. “We flew out to Los Angeles and met everyone under the sun from Interscope to Kanye’s Good Music.”

All of a sudden they had a management company and a lawyer, and signed on to some festivals—and even landed placement in TV advertisements for Nike, Showtime, ABC, and Samsung.

“Everything that we worked so tiredly for in our previous bands but failed to accomplish had happened almost overnight,” says Michael. “I remember us being so fearful of losing this newfound success or missing out on opportunities that we would just say yes to everything.” He adds, “Then three years go by and when you finally stop to look up you release how much you have changed. Your priorities have shifted, you’ve lost contact with a lot of close friends, and you even look different. You bought a house but are never home because you are constantly either on tour or are spending weeks at a time working in a studio in Los Angeles.”

Everything moved fast and there was no time to process it all—until COVID-19 hit in early 2020, bringing their headlining tour to a halt. It also gave them a moment to reflect on everything that has happened over the past few years.

Self-produced, Good Morning Stranger is a self-professed labor of love for Foreign Air. Fragments of songs “Monsters” and “Milestone” first started coming together, when the duo shifted to LA for a brief time, and after Clasen’s eventual move to NY, Michael was inspired to write darker tracks “Lonely World” and “The Money,” with the bulk of the album was penned in Nashville with other writers.

Once the duo finally made it to Nashville for the first time in early 2019, they stayed at an Airbnb around the corner from a music store and in Foreign Air fashion quickly found themselves hooking up vintage drum machines (i.e. Korg Rhythm 33) to various reverb and effects pedals, and experimenting with different sounds.

“We are still constantly experimenting with new sounds and instruments which in turn will usually help inspire new song ideas for us,” says Michael, who jokes that this mission also justifies their overspending on expensive gear. “I think that has been the one constant theme throughout the project.”

Working on Good Morning Stranger, the duo tapped into JDilla’s 2006 release Donuts and the drum production on D’Angelo’s Voodoo, as well as the Beastie Boys and other ’90s stuff they grew up on, to hone in on their production style.

“Even though the drums are programmed or cut up loops they are done so in a way where the songs still retain this very human element to them,” says Michael. “Some hits are purposefully late, some are early and off the grid, which impact the groove and feel of the songs. I wanted to incorporate that feeling into what we were doing. I wanted the music to feel like somebody had touched it with their hands and messed with it.”

Michael says they’ve also gotten better at overlapping electronic production and instruments, often laying synth with guitar through a pedal chain and out into a phaser. “Constantly being curious and exploring new ideas together is what really inspires us to keep going,” says Michael.

The duo even worked on their vocal production and harmonies over the years, even tapping into some sessions with Danish producer and composer Frederik Thaae, while Clasen dived deeper into mixing since Foreign Air’s 2016 EP For the Light—half of which was mixed by Tony Hoffer. “Being as self-sufficient as possible has always been a goal of ours,” says Clasen. “We really want to see our vision out to the end.”

Knowing Foreign Air’s journey, makes “I Believe” all the more enrapturing. Fast moving, the anthemic infectious electro-pop of “I Believe” is an ode to hope, partly inspired by a road trip and their own journey as artists, in lyrics Don’t tell me you’re falling back down / You could take it higher now We will be so much bigger when they draw the curtain back. Th

“I was quickly reminded how beautiful and diverse our country could be from one area to the next,” says Michael in piecing together “I Believe.” “I think it’s easy for us to get caught up in our daily lives and that we forget how much of a bubble we are living in sometimes. I thought it would be really interesting to try to write a song that people from all different backgrounds and upbringings could universally relate to—something with a simple message or lyric that you could play during the seventh inning of a baseball game, but could also be played at a wedding or bar mitzvah, and yet still fit in perfectly on a cool late-night dance floor.”

While in Nashville, Michel and Clasen connected with Gabe Simon (Dua Lipa, Foster The People) at his studio. As they started jamming, someone in the room improvised, singing what would become the track’s chorus, I believe in you. That was the hook.

“It was just one of those magic moments,” says Michael. “I knew right away that line was special, and that it could inspire that type of universal feeling, [and] from there… started chasing that concept.”

They wanted “I Believe” to feel familiar but fresh so kept in the Motown bass and drum beats, balancing it with some slowed, warped effects using guitars that they ran through pedals to give them the sound of synth organs.

“We had been recording night and day all week so Jesse’s vocals were pretty raspy by the last day,” says Michael. “However we decided to keep those original takes in the final version of the song because the strain in his voice gave the song a really special feeling.”

Clasen adds, “It’s about being who you want to be and not letting the nay-sayers stand in your way. We only have this one life so you gotta take chances and really push towards your goals and dreams.”

On Good Morning Stranger, additional tracks pulled in some additional co-writers from the Nashville circuit. The final song to make the album’s cut, ”Dum Dum” was co-written with Sean Van Fleet (Oliver Tree, PVRS); “Ultra Mega Love” was written with Konrad Snyder (Rainbow Kitten Surprise); and “Monsters” and “Don’t Use My Name” were co-written with Jayson Izuzio (Imagine Dragons). “I Believe” was the only track they worked on with Simon since they had to cut their trip short due to COVID.

Conceptually, the self-produced Good Morning Stranger explores everything from relationships, loneliness, and mental health. “All three [were] concocted together with a healthy dose of curiosity about the future of the world,” says Michael.

Even the album’s title has its place, pulled from a friend’s Instagram post when she found a deer peering into her kitchen window. “There was something so innocent and pure about it, that it felt like the perfect introduction,” says Michael. “I wondered if we could re-learn how to greet the unfamiliar with the same type of compassion and curiosity as we once did as kids—just maybe then the world would start to be a kinder place.” 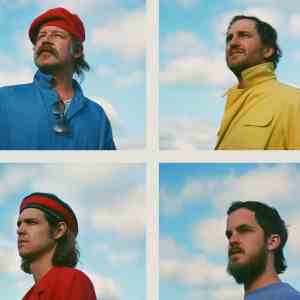 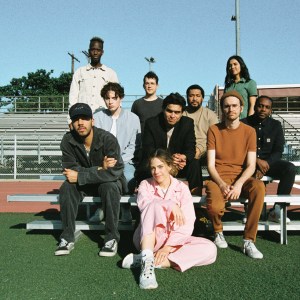