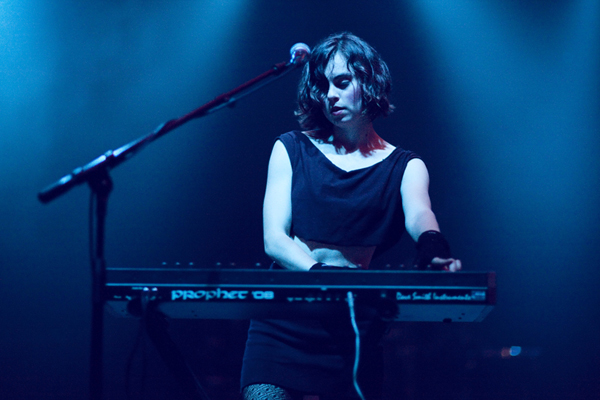 Much like the MGMT performance on Thursday night of Bonnaroo 2008, Neon Indian’s show on the opening night of this year’s festival felt like something on the verge of exploding. And the past year of Alan Palomo’s life must have felt quite the same. Yet, on stage Palomo exhibits none of the usual trappings of the instantly famous. He is poised, fluid and completely in control. And it’s mesmerizing to watch.

The Neon Indian front man has ace moves and he often leaves his synth and sampler station to one-hand the mic, gliding rhythmically across the stage. The rest of the band is equally adept. A hard-driving, heavy-hitting drummer, Jason Faries plays a perfect counterpoint to jammier, psychedelic guitarist, Ronald Geirhart. On a second synth station to Palomo’s right (which he took over for the encore) is the band’s most tantalizing member, Leanne Macomber. Though it’s hard to take your eyes off anyone in the band, Macomber’s perfectly timed bounces and glides seem most acutely wired to Palomo’s own maneuvers.

With a debut LP under their belt and a buzz that’s been building since last summer’s chill wave blast, Neon Indian leads the pack. Hopefully their performance on Thursday night will live on in Bonnaroo history in the same way that past My Morning Jacket and MGMT shows have registered as part of local ‘roo lore. If the buzz about the band on Friday morning at the festival is any indication, it certainly will. Stream Neon Indian’s set at NPR.org.

Before Jay Electronica invited about 300 fans on stage for his Friday afternoon set, he jumped into the front row and smoked a blunt. The New Orleans rapper was on fire, dropping rhymes about the levees, FEMA and Andy Dufresne in “Exhibit A.” (Yes, that’s the Tim Robbins character in The Shawshank Redemption.)

More than once throughout his set, Electronica (née Je’Ri Allah) would cue his DJ to cut the beat, and then rap seamlessly in silence to thousands of fans. Jay also made repeated reference to the late J Dilla, and rapped a few songs in homage to the producer, who died in 2006.

Sitting outside the Rocawear bus backstage a few hours later, Jay Electronica said, “We’re glad to be in Tennessee.” On stage, the rapper gave a heartfelt thanks to the people of Tennessee who took in Hurricane Katrina victims in 2005. The rapper, who now lives in New York, said his family still lives in New Orleans and said the city needs all the help it can get.

Asked whether he’d be stopping through Nashville this time around, Jay said he thought Nashville, along with Detroit, had the best studios in the country. Who else was the rapper looking forward to catching at the festival? Tenacious D and Kings of Leon. Asked what he thought about the Friday night headliners, Electronica offered, “I’m gonna check ‘em out.” Stream Jay Electronica’s set at NPR.org.

“Just remember which brand, er, band brought you the rain,” Jack White told the crowd on Saturday. It was a Freudian slip, but perhaps also a small, but telling, window into White’s mind.

The sense you get from seeing The Dead Weather live is an altogether different sense than what comes from hearing their new record, Sea of Cowards. On stage, each member represents a crucial function, and every second of the performance is carefully orchestrated and choreographed. And with a similar mysticism surrounding the band, The Dead Weather presents a Zeppelin-esque alchemy of their four parts.

While some might argue that White’s latest music is aggressive and lacking in subtlety, The Dead Weather’s live show touches on light and shade in a way in which Jimmy Page could relate. Just witness White’s guitar playing and shared vocal duties with Allison Mosshart on the eerie and stunning “Will There Be Enough Water?”, which occupies the same sort of hallowed ground as “No Quarter.”

In terms of showmanship and presence, maybe the only performer at Bonnaroo who overshadows White is Jay-Z. Add the fact that Tennessee is home turf for White, and maybe it’s even a close call. The Dead Weather might just be White’s most thrilling project yet. Stream The Dead Weather’s set at NPR.org.

Though not quite the “impossible ticket” that Conan’s two performances were in The Comedy Tent, Aziz’s second show at Bonnaroo (and first of three on the day) had people lined up in the boiling heat all the way to Centeroo on Sunday.

The young comedian from South Carolina has recently inked deals to work with Judd Apatow on three upcoming films. In the meantime, his Tom Haverford character on NBC’s Parks and Recreations is one of the highlights of network television.

Ansari’s Bonnaroo show included crowd-pleasing segments on Randy, Harris and R. Kelly. (Though the latter seemed to fall a bit flat.) For new material on 50 Cent, dating in L.A., text messages and ethnic slurs, he had the audience in the palm on his hand.

Ansari seemed to be enjoying himself elsewhere at the festival as well. His bubbly presence could be felt backstage, where he was caught dancing and hanging with The Flaming Lips’ Wayne Coyne for the late night LCD Soundsystem show on Friday. Perhaps in future years Ansari will even wear the master of ceremony hat that Conan donned in 2010. 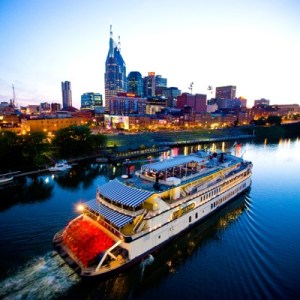 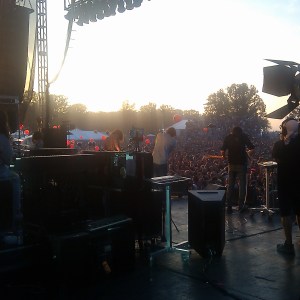