Third time’s the charm for Hannah Read, the Silsbee, Texas-born, Los Angeles-based singer-songwriter behind the cult indie-folk project Lomelda. It took her and her brother Tommy three separate attempts over eleven months to craft her forthcoming album, Hannah.

“I started the recording process in March of 2019,” Read tells American Songwriter in an interview featured below. “I set aside some time to write and record there in Silsbee and was able to do some of it simultaneously, ‘cause I was recording in my brother’s studio.”

“In 2019 I had two different sessions there,” she continues. “We thought we were gonna be totally done by the end of the [first] session, but we weren’t. Session two was in July of 2019, and we basically started from scratch. We thought we were gonna be done, still didn’t finish, decided to do a third session in February of this year, and again did basically a start-over. And that’s when it finally worked.”

The resulting record will arrive in early September as a deeply personal follow-up to Lomelda’s 2019 album, M for Empathy, showcasing some of Read’s most unflinching songwriting and varied arrangements to date.

“There’s some raucousness, some jokes, some having fun,” says Read of the album. “It’s just letting the dynamic be as wide as the range of emotions.”

Lomelda’s latest single, “Hannah Sun”—featured below with an accompanying video directed by Regina Gonzalez-Arroyo—finds Read revisiting a familiar theme: the dual struggles to connect and communicate. “Glad you held her / Glad you held him / Glad you held me too / Though I didn’t know how to / Be closer to you,” Read sings in the track, her voice raspy and glowing. The last line reads as a self-directive, but it’s delivered like a balm: “Hannah do no harm.”

We recently caught up with Read by phone about her decision to call Lomelda’s new record Hannah and how she hopes the music industry will change for the better following the COVID-19 pandemic. Check out the full interview and watch Lomelda’s “Hannah Sun” video below.

American Songwriter: Where are you right now? And where’s home at the moment?

Hannah Read: I’m in LA. I’ve lived here for a couple years. Home is still in Texas, and I’m hoping to get back there soon. I grew up near the Louisiana border, in Southeast Texas, in a tiny little town. But I also have family in Austin and I’m hoping to be pretty close to Austin when I return.

Where did you write and record the tracks on Hannah?

I recorded them in my hometown. It’s called Silsbee. That’s where I grew up, and I wrote and recorded most of the songs there.

I started the recording process in March of 2019. I set aside some time to write and record there in Silsbee and was able to do some of it simultaneously, ‘cause I was recording in my brother’s studio, which is pretty cool. It was definitely a new type of process for us.

In 2019 I had two different sessions there. We thought we were gonna be totally done by the end of the [first] session, but we weren’t. Session two was in July of 2019, and we basically started from scratch. We thought we were gonna be done, still didn’t finish, decided to do a third session in February of this year, and again did basically a start-over. And that’s when it finally worked.

Were you actually working on different songs or re-recording the same ones?

Mostly the same songs, though some of them changed pretty drastically throughout that process.

Was this just you and your brother?

There were some other players at each different session, but the “we” that was consistent is me and my brother. He’s been a collaborator for me forever and always has been a producer and engineer for all the Lomelda recordings. But this was the first time we were doing it this way, because we actually had his new studio that he built there in our hometown. In the past we’ve just recorded at home or wherever we were.

At the time, did you know this would be a sort of self-titled record? When did the name Hannah come into play?

That had been in place for a while. Inspirational little lines and some of the writing happened before that first session. Not very many songs were done at that point, but there was a lot of material that hadn’t formed into songs yet and the need to call this record “Hannah” was definitely already in place.

What was the significance of that need?

I think, partly, it felt important to call it “Hannah” because it attached me and my person and my responsibility to the music—because that’s my name—in a different way than just calling it “Lomelda” would do. It also is significant to me because everybody, as they grow up, has to examine what they’ve been given and then compare that to what they want to be or what they’re choosing. For me, I was reconciling what I was choosing and what I was given, and deciding to call myself Hannah.

M for Empathy is extremely sparse and was more or less performed or recorded as if it was happening live and therefore has this particular intimacy and personality. What I was talking about in that quote is, with Hannah, with this record, there’s a similar attention to what’s personal and what’s close to your ear as a listener, but there’s a different mood. There’s some raucousness, some jokes, some having fun. That’s the main thing I was talking about in that quote. I got to play drums on the new record, which there’s no drums on M for Empathy. It’s just letting the dynamic be as wide as the range of emotions.

In the same interview you continued, “I don’t feel like I’m done studying these themes. It’s been the same themes on every record, just a different angle each time. It’s always going to be about communication and connection.” Do you see those threads in Hannah as well?

Definitely. One of the first songs that I shared publicly from this new record is one that is called “Hannah Sun.” There’s a line in the song, “I didn’t know how to be closer to you,” and that’s just the most basic, very blatant way that I talk about that theme of connection, of communicating.

The angle with the Hannah record is more focused on my personal responsibility to communicate and to stay connected to myself and to the people around me—tackling that on a personal relationship level [and] on an I-sing-on-a-stage-and-there’s-an-audience level. Instead of just examining how it happens out in the world, it’s just trying to be even more particular about my own responsibility.

First of all, I have a level of safety. I have housing. I have not totally run out of money yet, which is a blessing, and that has been 100-percent helped along by people buying t-shirts on the internet, which is a bizarre way to sustain myself but that’s what’s happening. Usually I would be playing concerts and that’s obviously gone. Also, I am white, I am healthy, I am doing okay. So I want to say that first.

But the main thing I’ll point to right now is the music world, or the music industry. The fact that it has come to a halt on many, many fronts is perhaps this chance to do it differently. For artists it is completely moving toward less and less of a sustainable thing. Me and a lot of the people around me view the only way to sustain our existence is by touring, and touring basically takes you out of a community, makes you blip into different communities, and therefore you’re like a ghost—you’re not actually a part of the community. This is how rock stars have gotten away with so much harmful behavior for as long as rock stars have existed, because they’re not actually part of the community, and I would really like for that to be different.

I’m hoping that the people who have held the power and moved things toward this totally unsustainable mode just don’t have that power any more and that the people who are making the art and being part of something in a more real way than having a hit track that’s on all the playlists are actually gonna be the ones who benefit in the future. I don’t know how that’s gonna happen because obviously the power and the money is all tied in together… But I’m hopeful that the attention on how broken the system is will lead to people actually saying, “Okay, I don’t want to engage in this any more.”

Hannah is out Sept. 4 via Double Double Whammy. You can pre-order it here. 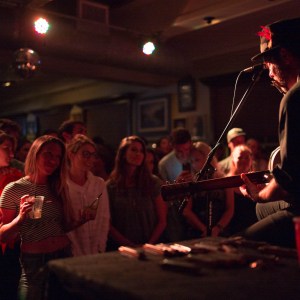 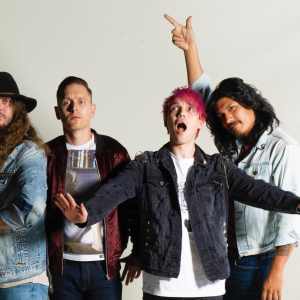