Like many working musicians, he’s been reinventing himself musically to fill in the gap of all the cancelled gigs

Jared Rabin’s an acclaimed singer-songwriter, recording artist and multi-instrumentalist, as well as a husband and a father. So as one might expect, he’s usually crazy busy balancing all of it. Besides performing his own music solo and with a band, he’s leads the Chicago Players, a tremendous and beloved big band that plays weddings and other events all year round all over Chicagoland. They are truly exceptional; with four great vocalists, they cover all styles and generations of music, from standards and classic rock though rap, hip hop, 90s, and beyond – and all with great purity and soul. It’s why they’re in constant demand, booked throughout the year.

Of course, the lockdown changed all that. His calendar was jammed, like that of most working musicians, with jobs all summer long and through to the end of the year. There was a a record release show and tour coming up for his new album, No Direction, all of which were cancelled, as were all the gigs with the Chicago Players. The pandemic brought everything to a full stop. But not for long.

He did release No Direction, his latest album, and it’s already being acclaimed and awarded; Deli magazine named the title track “an instant classic,” and that song was also a semi-finalist in the International Songwriting Competition (ISC).

Like all serious songwriters, Jared’s a creative and crafty guy, and not one to be kept down for long. Songwriters are forever finding new possibilties within limitations; it’s part of the job. So without missing too many beats, he expanded his studio with the tools for live-streaming, educated himself on the best ways of doing it well, and launched his own live weekly show on Facebook. You can find that show, which he calls Live Set, every Friday night at 8 pm CST on his FACEBOOK PAGE HERE.

“Doing the weekly live streaming set from my basement,” he said, “has been fun. So far I haven’t repeated any covers, and I do a different Dylan song each week. It’s been cool to have people from all over that are able to tune in each week who wouldn’t usually see me play that often.”

Dylan songs he’s done have included “Girl from the North Country,” “The Lonesome Death of Hattie Carroll,” “Don’t Think Twice,””Tonight I’ll Be Staying With You,” “Lay Lady Lay,” and “Tomorrow is Such a Long Time.”

“Three months of quarantine have flown by surprisingly quickly,” he said. “Being home with my wife and my kids and our dog has been great. They all keep me very busy. At first with all my work cancelled, it felt like a pretty big void.”

“The impact of the virus came quick to this corner of the music world,” he said, “In Chicago, all the bars and restaurants are closed, which had the obvious immediate consequences. All the weddings in town are being canceled and postponed, which is a huge chunk of my income personally.”

“I have seen hundreds of posts from local musicians here in Chicago,” he said, “expressing anxiety and concern, performing online, asking for tips, offering their services. I have also seen just as many posts from international celebrities like David Crosby, and music industry legends like Brent Mason, doing the exact same thing!

“The internet has always been a big pond with a lot of fish, but now it’s basically the only pond with all the fish! However I have noticed a few friends, who I’ve seen playing to empty barrooms in Chicago week after week, live-streaming to audiences that numbered in the hundreds on a weekday afternoon. So perhaps there is a silver lining in there somewhere.”

One of those is that Jared, and other live-streaming musicians, have taken this opportunity to raise funds for important causes. He urges his listeners to donate to a different cause in every show. Recently he raised money for Black Lives Matter.

One thing he’s been doing is an inspired series of video collaborations with friends across the country. Of these, one of the most remarkable is their great cover of Fleetwood Mac’s “The Chain” (which is the only Mac song credited to all five members of the band). Jared recreated the song and the record with the help of the singer Ren Patrick and drummer-percussionist Jordan Kozer. Jared also sings on it, and plays many guitars, including a burning electric solo.

Long known for unexpected covers he’d perform at gigs both solo and with his bands (such as “Africa” by Toto, which he nailed even in a solo acoustic setting), he’s got several coming in the future, including Carole King’s “It’s Too Late.”

And there’s more, as he informed us; a series of videos in which he plays a bluegrass standard on every instrument. And also a project with a Jewish choir producing a series of distance collaboration videos for them.

He’s also begun playing his first gigs outside of his own home, mostly “social distance” gigs in peoples’ backyards.

Jared lives outside of Chicago with his wife Sarah and their two kids: there’s Leo, who is three-years old, and Leo’s little sister Layla, who is all of five months. Leo is a lifelong Tom Petty Fan, and one who has been dancing to “You Wreck Me” and other Tom classics since before he could talk. These days, though, according to his dad, he’s really into Phish. “I think their lyrics are good for kids,” Jared said.

As for Layla’s music preferences, Jared said right now it is all about one song. “Row Your Boat.'” 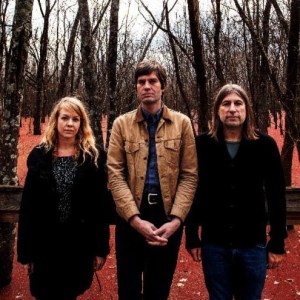 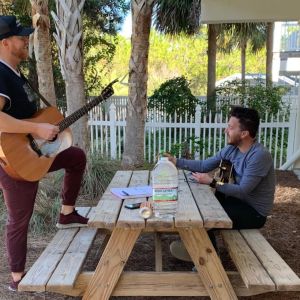