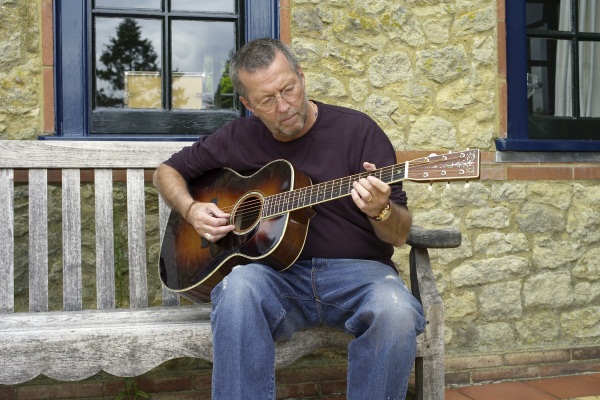 For most of his career, Eric Clapton has been closely associated with the Stratocaster. It’s the guitar you hear on Derek And The Dominos’ Layla And Other Assorted Love Songs, and also the guitar that one of his idols, Buddy Guy, plays. Clapton even once said the best way to tell the difference between his and Duane Allman’s guitar parts on Layla was by the difference between the Strat and Les Paul. (In fact, Clapton was one of the early stars of the Les Paul, too.)

But on MTV Unplugged in 1992, Clapton played a 1939 Martin 000-42 and a 1966 Martin 000-28 (which had actually been modified with 45-style appointments). The show might be seen as a turning point in Clapton’s career, marking the beginning of a wiser, and more mellow, acoustic sound.

Dick Boak, Martin’s director of Artist and Public Relations, says when the MTV show aired and started gaining popularity, his phone was ringing off the hook with people asking what kind of Martin Clapton had played. The company decided to approach the guitarist about collaborating on a guitar and Clapton agreed.

In 1995, the first Eric Clapton signature model, the 000-42EC, was introduced in a limited production run of 461. Boak says he chose the number 461 in homage to Clapton’s 461 Ocean Boulevard (and because he thought he could sell about 500 guitars). Martin worked off Clapton’s ideas and coordinated the project with his guitar technician, Lee Dickson. The resulting guitar combined features from both of the Martins that Clapton played on the Unplugged show. In his book, Martin Guitar Masterpieces, Boak writes about traveling to the winter trade show in 1995, with cautiously high hopes of unloading all the guitars. “They were all gone in a day. Everyone stood there, myself included, scratching their heads in wonder, wishing that Eric might have resided up the street a mile or two. 1,461 Ocean Boulevard would have sufficed nicely.”

Prior to Clapton playing 000 guitars on Unplugged, Boak says, “smaller-bodied Martins weren’t terribly popular.” The company had pared down their line, putting most of the focus on dreadnoughts. “Clapton single-handedly revitalized the 000s,” says Boak.

With the rising popularity of the 000 guitar, Martin and Clapton decided to focus on what the guitarist would call his “poor man’s” guitar, a signature 000-28, with less ornate appointments than the previously limited edition 000-42. This guitar would become the stock Clapton model for Martin, and the company has sold more than 17,000 units since 1996.

The Clapton years at Martin have been fruitful, with eight projects since 1995, and Boak says there are “more coming.” Every Clapton model has had a 000-sized body, with 14 frets and a short scale neck, but the types of wood and appointments have varied.

Clapton was likely drawn to the 000-body shape because of its shorter scale, which makes bending notes easier. “I think he just picked up the 000 and loved it,” says Boak. “He had been playing it very early on, 30 years ago. There are photos of him playing a 000-28 around the Delaney and Bonnie period.”

Clapton has stayed true to Martins, even when projects might have beckoned him to pick up other guitars. In the film Sessions For Robert J., Clapton and guitarist Doyle Bramhall II visit 508 Park Avenue in Dallas, Texas, where Robert Johnson played his final session. Sitting in the abandoned warehouse, Clapton plays “Hellhound On My Trail” on his Bellezza Nera, a black 000 designed by his friend Hiroshi Fujiwara, a Japanese artist and musician. The guitar also appears in the painting by Sir Peter Blake on the cover of the 2004 companion album, Me And Mr. Johnson. In another part of the film, Clapton channels Johnson’s “Love In Vain” on a white 000, the Bellezza Bianca.