Peace is madness. Joy is sadness. Transfixing on the good and bad in every situation, Finnegan Bell wrote “Peace=Madness” in a stream of consciousness, then fleshed it out with the band.

“’Peace [is] Madness’ and joy [is] sadness is about how duality lives in everything and how when everyone leaves, you’re just stuck with yourself,” the Love Ghost singer tells American Songwriter. “I tend to look outside myself for the perfect life to live, but at the end of the day, I’m always still just me.”

For Love Ghost—Bell, along with guitarist Daniel Alcala, bassist Ryan Stevens, drummer Samson Young, and keyboardist Cory Batchler—“Peace=Madness” is a sonic painting of anxiety, an alt-rock and hip-hop haze releasing the fears and doubts that arise.

“I have to deal with anxiety attacks a lot, almost every single day,” shares Bell. “It really sucks, but this song is basically me describing what they feel like.”

For Bell, songs come together swiftly. “It just feels like electricity,” he says. “I start to feel depressed if I haven’t written music in a while. It used to take me longer to write music, mostly because I was too reliant on other people.”

Releasing songs constantly with the band, Bell has a goal of releasing 100 songs this year. “That would be crazy,” he says. “I’m not gonna lie though, sometimes the creative process has a lot of friction. There are lots of ups and downs, but that just makes us dig deeper and decide that this is really what we want for ourselves.”

Bell hopes the song resonates with others struggling with the same anxiety or other issues. “I think that’s one of the most beautiful qualities of music or art… how everyone can interpret it in different ways, and it can affect people in the way that they need it,” he says. “I believe that music has many healing qualities to it, and you’re going to interpret what you need from the song.”

He adds, “My approach to music has been, and always will be intensely personal and vulnerable. Right now, as I release more music. It becomes less about what I feel, and more about what those around me also feel. Eventually, I hope it to transform into what the world feels at large.”

Following up the band’s single “Wolfsbane,” an earlier release in 2019, more new music is on the horizon for Love Ghost.

“The new music that’s coming from Love Ghost is just our storytelling of the things happening in our lives at the moment,” says Bell. “These songs, to me, are really all threaded together by time. We are in an insane period of history, and therefore we are writing some insane music.” 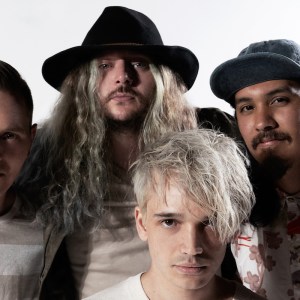